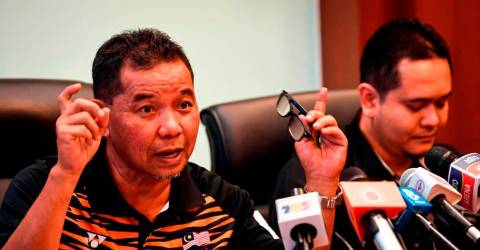 KUALA LUMPUR: The National Sports Council (NSC) is confident that national para athletes will be able to record better performances at the 2024 Paris Paralympics.

“We created history at the 2016 Rio Paralympics through the athletics team, who bagged three gold medals. We also made history in Tokyo 2020, this time not just through athletics, but also through powerlifting and badminton.

“So, based on our achievements in Tokyo, it is not impossible for several other sports to create history in Paris. At the same time, we cannot be complacent with regard to the sports that have contributed gold medals so that they can continue to perform consistently,” he said.

He told reporters this after the memorandum of understanding (MoU) signing ceremony between the NSC and Allianz Malaysia Berhad (Allianz Malaysia) here today.

Ahmad Shapawi said that besides the three sports which had contributed gold medals at the last two editions, namely athletics, badminton and powerlifting, three other sports being targeted to create history in Paris are archery, table tennis and boccia.

“We were quite surprised by the achievement of boccia in Tokyo. We also have paddlers who stood out. So, perhaps these two sports can conjure something. Archery is also another one of our targets,” he said.

“For the record, our Paralympians performed superbly at the last two editions of the Paralympics by bagging three golds and one bronze in Rio de Janeiro, Brazil; and three golds and two silvers in Tokyo last year.

Earlier, Allianz Malaysia announced its collaboration with the NSC to support the national para athletes’ training programme in preparation for the 2024 Paris Olympics.

Through this collaboration, national para athletes will benefit from the sponsorship to be channelled to their training and development ahead of the Paris Olympics to be held from Aug 28-Sept 8, 2024.

In addition, Allianz Malaysia will also provide year-round insurance coverage to the athletes throughout their training sessions, competitions and when they travel overseas to represent the country.-Bernama