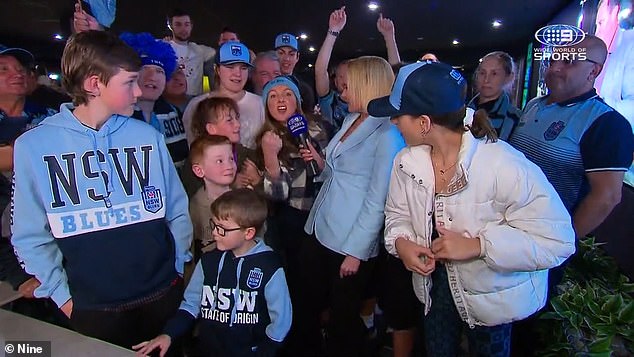 A rowdy NSW fan has shocked a Channel Nine reporter by screaming a very raw insult at Maroons supporters during a live cross shortly before State of Origin game three began on Wednesday night.

Emma Lawrence was interviewing a bunchy of Blues fans outside Suncorp Stadium when she asked them, ‘Do you have a message for the Queenslanders?’

More than a few parents would have had to explain to their kids what ‘Get a cockroach up ya!’ means after the Blues fan (pictured) screamed it during a live cross on Wednesday night

A male fan in an electric blue wig simply screamed out, ‘Ya grubs!’ before Lawrence turned to the woman next to him and asked, ‘What about you?’

‘Cockroaches’ is a nickname Queenslanders often use for their hated rivals from south of the Tweed River. 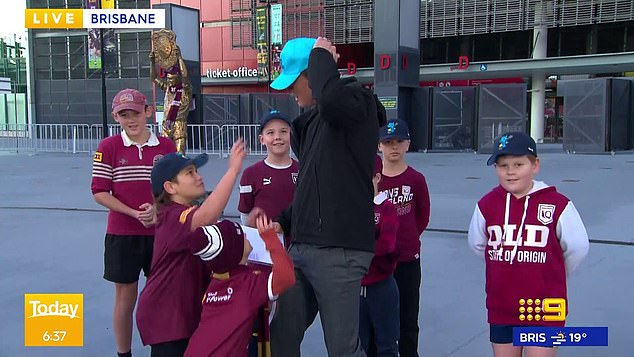 An earlier live cross got a bit out of hand on Nine when Today show host Karl Stefanovic joked that if young Queensland fans aren’t ‘in the game, they’re stealing cars’ after some kids took reporter Alex Cullen’s blue hat in a prearranged stunt

Channel Nine sport reporter Alex Cullen was doing a live cross from outside Brisbane‘s Suncorp Stadium – the venue for the deciding State of Origin clash – when several kids dressed in Queensland jerseys gathered around him in what looked like a pre-arranged stunt.

When Cullen put a NSW Blues cap on his head, one of the youngsters snatched it and ran off with all the other little Maroons fans.