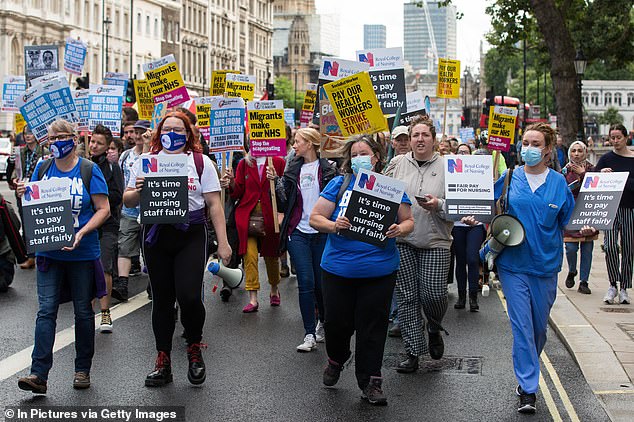 Nurses’ pay would rise to an average of £46,000 if the Department of Health caves in to their strike-threatened wage increase demands, figures show

Caving in to nurses’ wage demands would hike their average annual pay to more than £46,000, a Mail on Sunday analysis reveals ahead of their strike.

But figures provided by NHS Digital show the average pay for qualified nurses in England has reached £40,147.

This comprises basic salary of £35,841, plus extras for shift work, overtime and living in a pricier area worth £4,306.

The figure compares to average full-time earnings for all jobs of £32,000. Giving in to the RCN’s demands would take average total pay for nurses in England up to at least £46,455.

The Department of Health and Social Care has put the cost of their demanded rise at £9 billion a year because of contractual obligations to lift the pay of thousands of health service colleagues by the same amount.

But the RCN said: ‘This is grossly inaccurate scaremongering.’ It said analysis showed 80 per cent of the cost of the pay rise would return to the Exchequer through spending and tax.

It added that paying nurses better would help to retain them, cutting the need for more expensive agency staff.