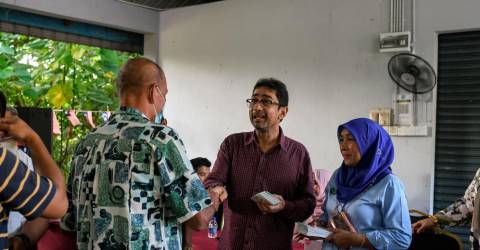 PADANG BESAR: The office of Padang Besar MP has allocated RM50,000 to help 148 victims affected by a storm that hit the area on July 12.

Padang Besar MP Datuk Zahidi Zainul Abidin said all of them received aid in the form of cash and hoped this would ease the burden of the victims in the face of disaster.

“There were 148 houses involved in (the areas of) Titi Tinggi, Beseri, Chuping, Mata Ayer and Santan. The worst hit areas are Chuping and Mata Ayer,“ he told reporters after presenting the donation to the affected victims at Mata Ayer Assemblyman Service Centre here today.

Zahidi, who is also the Deputy Minister of Communications and Multimedia, said most of the houses suffered roof and electrical appliance damage due to the heavy rain and storm.

He said related parties such as the Social Welfare Department (JKM), the Perlis Islamic Religious and Malay Customs Council (MAIPs) and the Menteri Besar’s Office also contributed to assist the victims.-Bernama