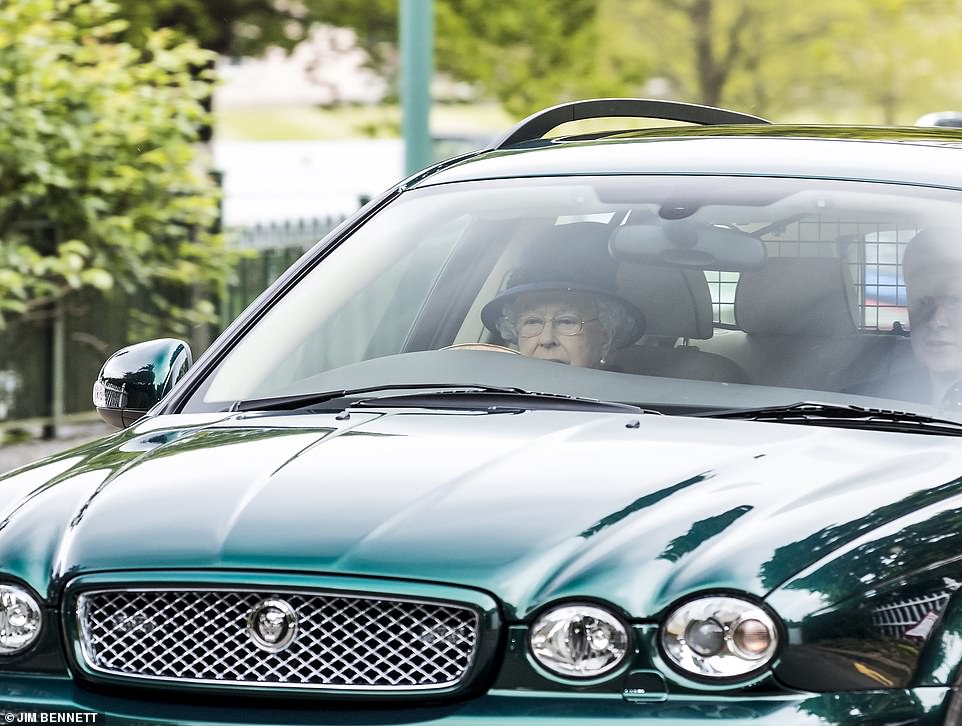 A Jaguar X-Type estate once owned and driven by Queen Elizabeth II will go under the hammer later this month with no reserve.

The green estate – whose colour is known as Emerald Fire – has driven less than 75,000 miles and has an extensive service history.

As befitting a car once owned by a monarch, it has a Barley leather interior and a range of creature comforts such as a sunroof, climate control, electric windows and an automatic transmission.

Despite having the look of a family car, the Jaguar, designed by Ian Callum, has a 3litre V6 engine which sends power to all four wheels, making it incredibly steady when driving enthusiastically.

Although for true petrol heads, the Jaguar X-Type was never loved given that most of the mechanicals hidden under the big cat’s body came from the humble Ford Mondeo. 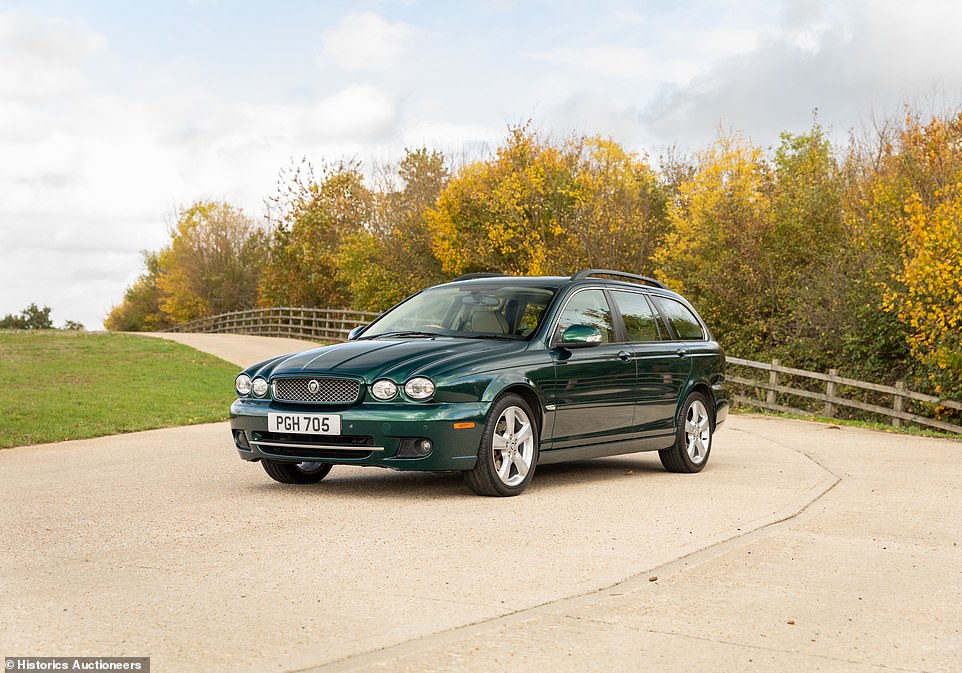 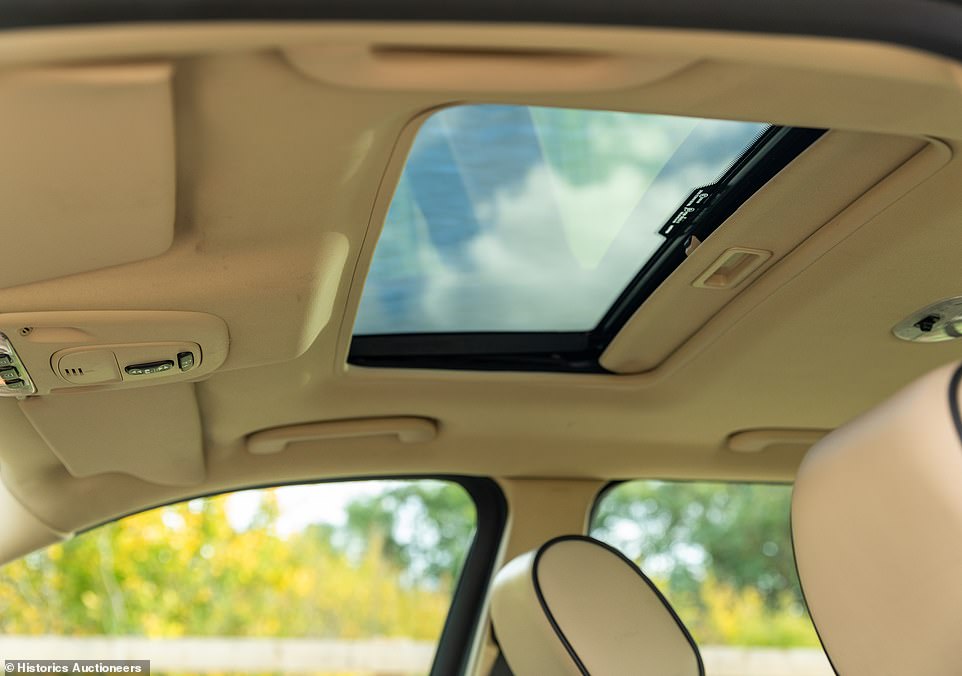 Air to the throne: The Jaguar X-Type has an electric sunroof, pictured, as well as a climate control system 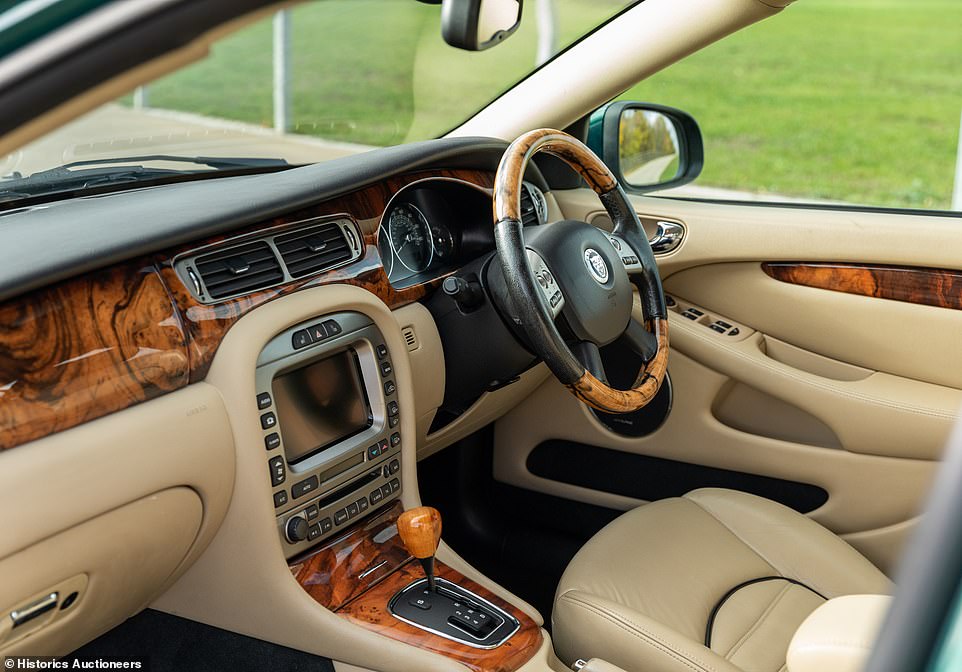 Inside the Jaguar, there is plenty of wood effect trim and an automatic gearbox, as well as CD and a Sat Nav 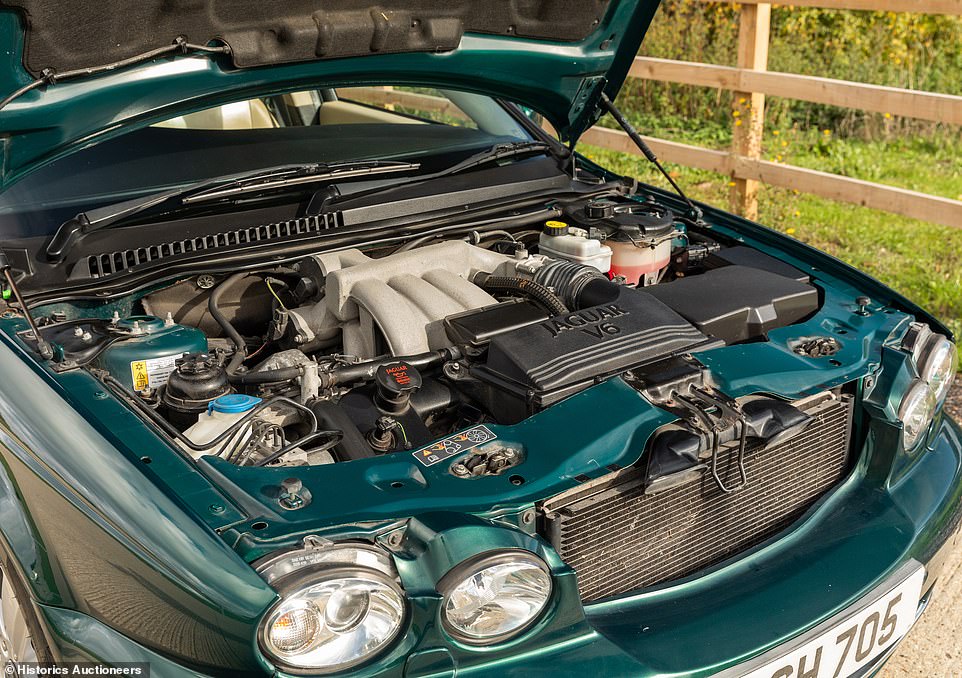 Under the bonnet, the car features a 3-litre V6 engine – the biggest and most powerful available in the range 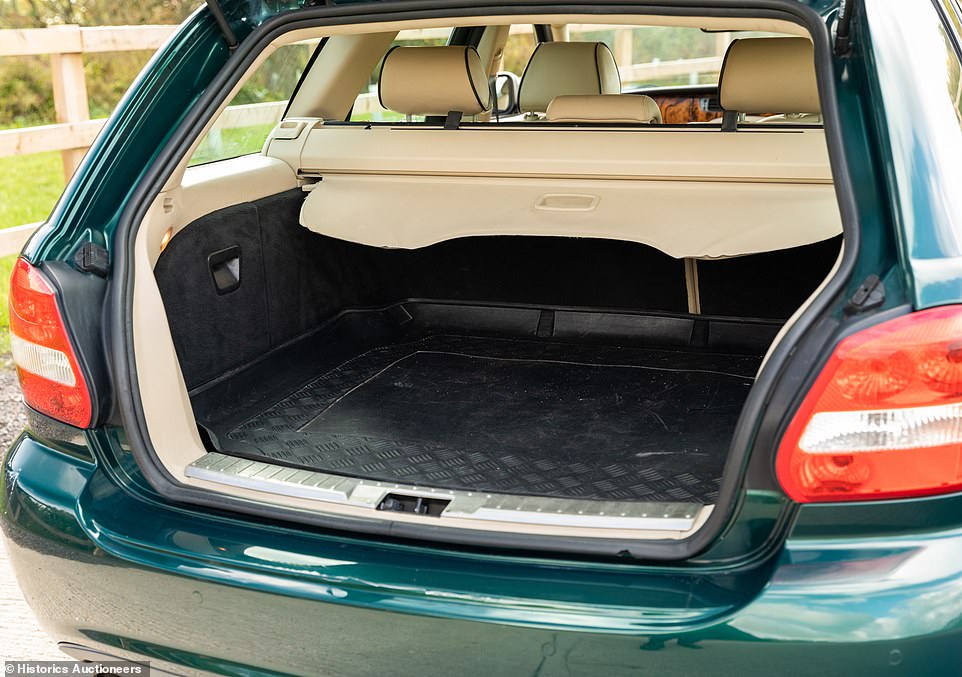 In the back, the luggage space has been lined to protect the car from any damage caused by dogs

The car is being sold by Historics Auctioneers at Mercedes World near Weybridge, Surrey on November 26 with no reserve.

When a car is auctioned with no reserve it will sell for whatever price the hammer drops at – even if it is only £1. But due to the provenance of the Jaguar, it is likely to reach at least five figures.

According to Historics Auctioneers: ‘This fantastic piece of Royal history is presented in Emerald Fire with Barley leather interior and the first owner was HM Queen Elizabeth II.

‘This is confirmed by its original booklet stating its registration as PYN IF which can also be seen in photos with HM the Queen at the wheel. It comes with a sunroof, automatic transmission, electric windows, climate control, a good service history, Jaguar Heritage Trust Certificate and has been well maintained.

‘The Royal Family might have a long history with Bentley state limousines, but they love Jaguars as well. Although the late Queen Elizabeth II was seen behind the wheel of several cars during her long reign, her favourite seems to be the Land Rover Defender. 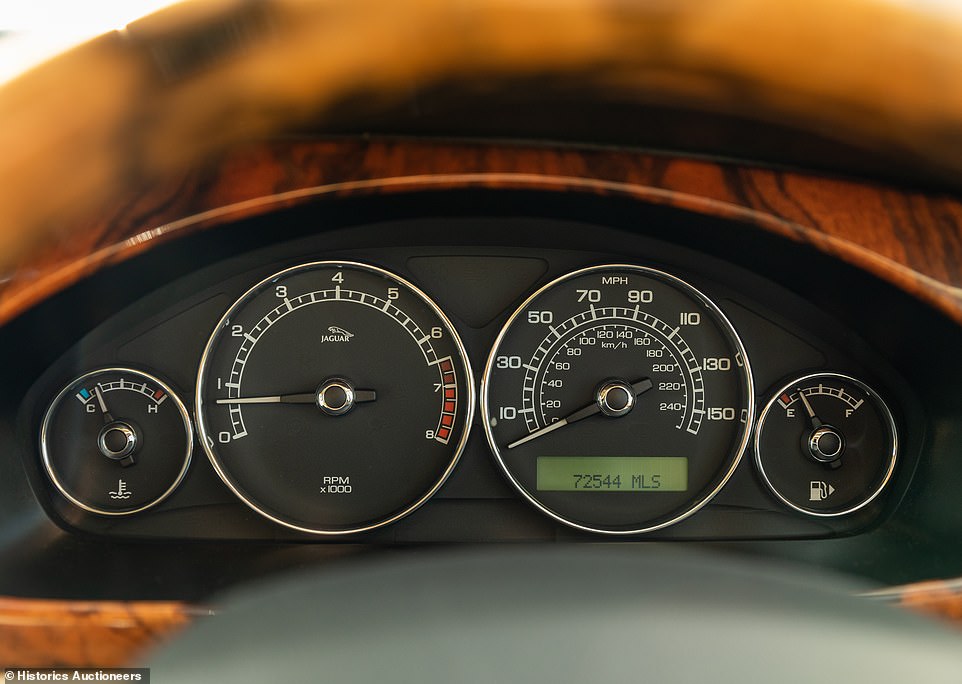 According to Historic Auctioneers, the car has only covered 72,544 miles and has an extensive service history 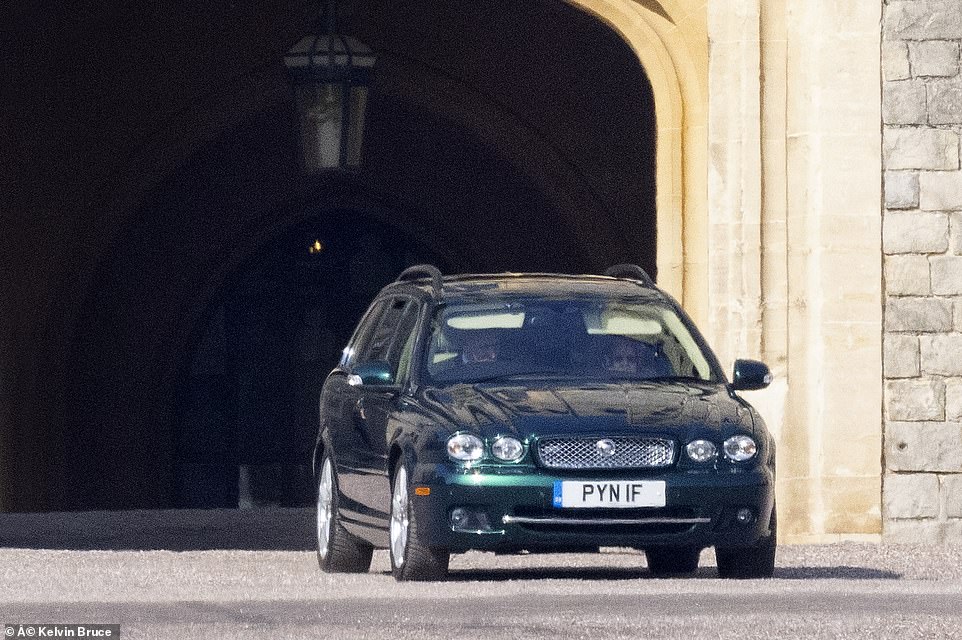 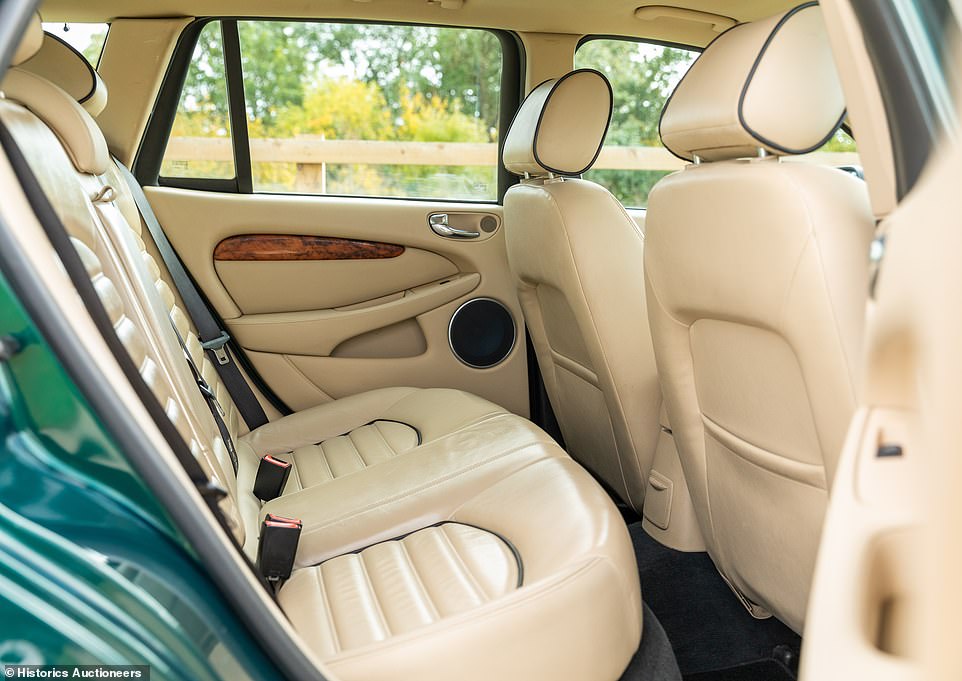 The back seats in the 13-year-old car look immaculate as do the door cards, carpets and wooden trim 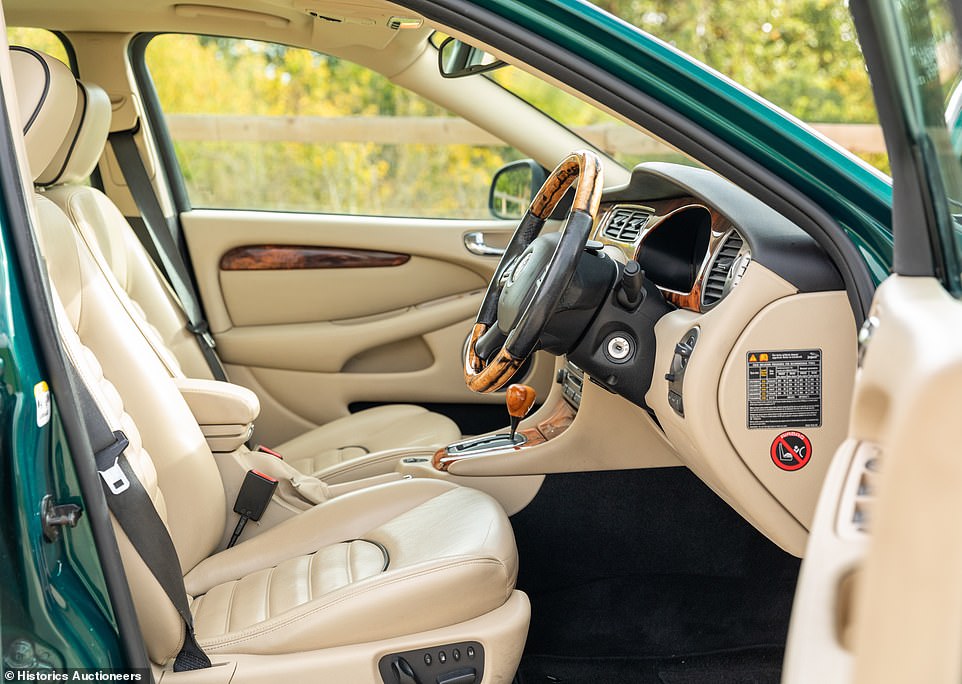 While it isn’t possible to buy your way onto the throne, one bidder will be able to sit in the late Queen’s old driving seat 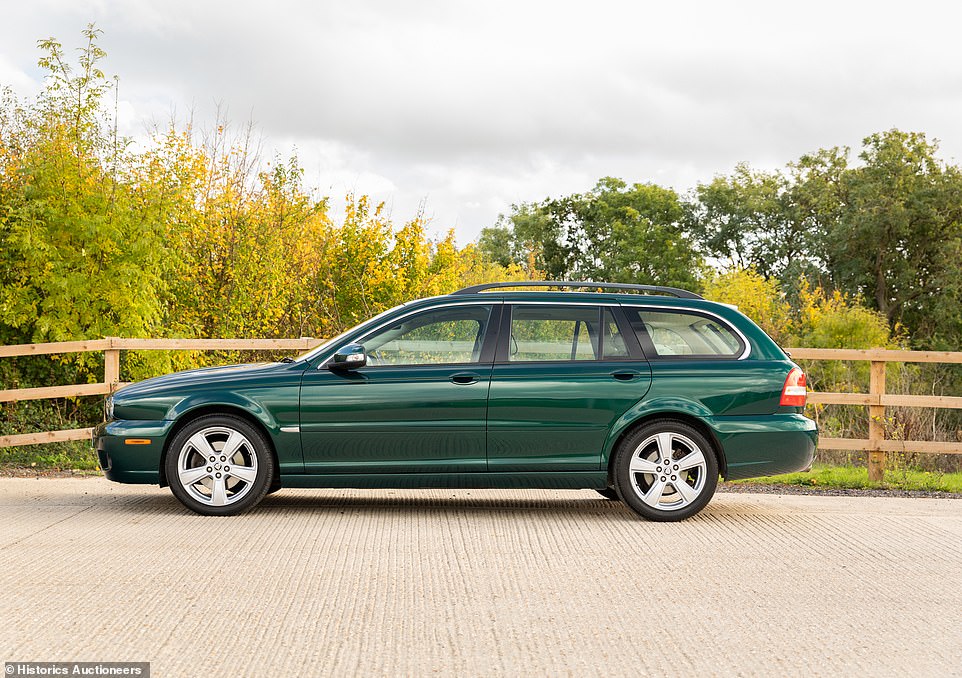 For a 13-year-old car, its bodywork looks immaculate with no supermaket carpark damage, as do the alloy wheels with no signs of impacts from kerbs and potholes 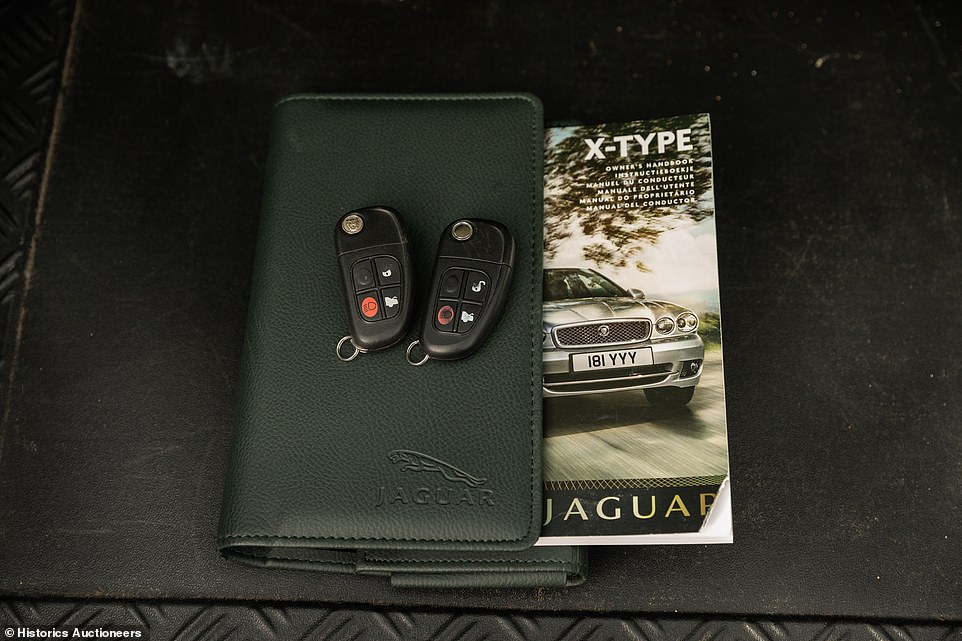 As well as the extensive service history, the car comes with two sets of keys, one of which shows some Royal wear and tear

‘She had a particular liking for this model, but when that was unavailable, she had a back-up car, a Jaguar X-Type Estate.

‘In the pictures available on the internet, you can see HM Queen Elizabeth II driving this very car with Her Majesty wearing sunglasses and a headscarf which was so typical. She looked happy and healthy, leaving Windsor Castle behind her and at the wheel of the Jaguar, driving up the Long Walk.

‘From 2004 to 2009, the X-Type Estate wasn’t among the most desirable models the brand ever built but who would have thought this would be one of Queen Elizabeth II’s go-to vehicles?

‘It came with two fuel options and the biggest engine, though, was petrol. It was a 3.0 litre V6 engine, which was the option Queen Elizabeth II had for this particular car. This surely is a car for the serious collector or Royalist and with a provenance which is impossible to match, this is unique!’

James Good of Historics commented: ‘It is such an honour to bring to auction such an iconic piece of history – and a car that was evidently so much enjoyed by Her Majesty Queen Elizabeth II.

‘A wonderful and unrepeatable collectible to treasure .’