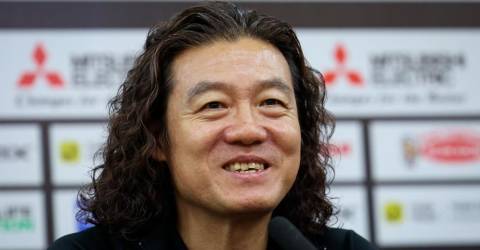 Due to the disappointment of not being able to lead Malaysia to qualify for the final, Pan Gon declined to answer the impact of the AFF Cup on Harimau Malaya’s preparation for the 2023 Asian Cup.

The 53-year-old South Korean coach instead expressed his feelings about being together with the players for about five weeks since the end of November last year.

“I think we better don’t think too much, we have done this for more than five weeks, we all were very united, all positive, we talked about dreams and the future and we encourage each other.

“They (players) came to help, without these players we can’t even participate in this kind of tournament that not in FIFA period, they gave up a lot of things to come here,“ he said during a pre-match press conference here, last night.

Pan Gon said the team will conduct a thorough evaluation besides giving an overview of some of the players from the AFF Cup squad who may be retained for the next tournament.

“Some players will stay some players maybe this is the end of their journey, we don’t know…but we don’t want to blame them. I will take all the responsibility,“ he said.

For the record, Harimau Malaya were boosted by new faces during the 2022 AFF Cup campaign after about 14 key players were unable to participate due to personal matters, family commitments and injury problems.

Malaysia, the 2010 champions, were eliminated in the group stage in the 2021 edition of the tournament.-Bernama