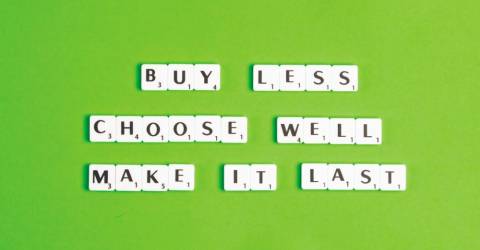 Khor Sue Yee, one of the co-founders and executive directors of Zero Waste Malaysia, started the group on Facebook in 2016. It was registered as a non-profit organisation in 2018 and the aim of the organisation is to increase awareness of sustainable living and promote a zero waste lifestyle by advocating individual actions. At the same time, they also serve as a resource platform for the community to learn about local zero waste tips.

On the question of greenwashing, Khor explains that the term has a different meaning to different people, depending on their environmental values. For example, brands can portray themselves as being eco-friendly when their values aren’t actually aligned to that.

For Khor, it is not a question of right or wrong. “You can also look at it from another perspective. If they actually didn’t do anything, greenwashing wouldn’t be a thing. So in a sense, greenwashing came into existence because brands are starting to take action, despite how small it is.”

Since the values of consumers are slowly changing, companies and brands might greenwash so that they can make the public think that they are doing something good for the environment.

On top of being a zero waste advocate, Khor has also had past experience working with large corporations as a strategic sourcing consultant, and has a multifaceted view on greenwashing.

“First of all, perhaps we need to look into their future plan as a whole. For example, maybe the company is starting with greenwashing but only as a short term plan, and they might have a long term goal to be more sustainable in the future.

“A big company might greenwash because they can’t roll out their entire implementation plan all at once because that will require a lot of investment and cost. So instead, they might start out with pilot projects first to get feedback from the consumers.

“For example, a big skincare brand might start a refillable solution but it’s only available at one outlet and they won’t allow the consumers to use their own reusable bottles. Some people might feel that that’s unfair, but maybe the company had already done their research and that was the best solution to make sure that their product is at its best quality. Perhaps they have already invested a lot for that product’s whole production line, and it would actually also create unnecessary trash if they just scrapped that product.”

“Because we want the product, we then indirectly create the demand for the producer and brand owners. It [goes] both ways. I used also think that it’s the brand owners or the industry’s fault, but after taking a step back, I realised that it’s also because of consumers’ demands.”

Naturally, we’re drawn to beautiful products, aesthetically-pleasing packaging, and affordable prices, but most of us don’t consider the human labour and the environmental costs.

In terms of education, Khor explains that we also need to educate ourselves as consumers on how we can really be more mindful, instead of being easily swayed by social media and advertising.

“We believe that we can use our power to demand changes from companies or even brand owners by choosing what we purchase, and by buying products that are aligned with our values. We want to inspire more people to take practical action right away and advocate individual actions such as voting with their buying power.

“You might think that your individual action isn’t enough because you’re just one person, but if all of us lead by example, you can inspire the people around you.”

And that was how Zero Waste Malaysia grew from just a Facebook group of fewer than 100 people to what it is today. Now, their group consists of more than 41,000 people share their zero waste journey on a daily basis.

According to Khor, having a zero waste lifestyle doesn’t mean that we can’t own anything.

“Some of us are also collectors, but it’s not about how much things you own, but how we can generate less trash. In Zero Waste Malaysia, we teach people that there is no such thing as a totally zero waste lifestyle and the term ‘zero’ just means the goal. What we want is people to learn how to avoid bringing potential trash into our rubbish bins.”

Zero Waste Malaysia advocates the 5Rs principle by Bea Johnson, who started the zero waste movement. We used to learn about the three R’s, which is reduce, reuse and recycle, but at the top of the 5Rs concept is refuse, which is the first thing we should do whenever we can, with the last R being rot. “If you look at the hierarchy, recycle is actually the fourth R because recycling is a very energy-intensive process. Recycling also requires a lot of water to clean the trash and human labour is needed to sort the rubbish, so the cost of recycling is actually quite high.”

If we look into the global recycling rate, it’s about 9% for plastic waste alone. That’s why instead of depending on recycling our trash, we need to avoid making the trash in the first place by refusing.

The event is for people of all ages where you can learn how to segregate your waste, alternative zero waste solutions on proper waste management, and debunk the recycling myth. It will take place from 11am to 5pm at The School @ Jaya One.

Register at bit.ly/mytrashpedia or check out the website at trashpedia.zerowastemalaysia.