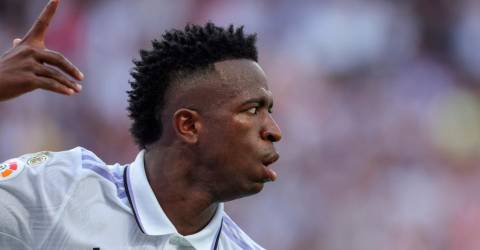 SAO PAOLO: Pele, Neymar and other big names in Brazilian football voiced outrage Friday over a Spanish agent’s allegedly racist comments on Brazil and Real Madrid star Vinicius Junior, whom he urged to stop “acting like a monkey.”

Pedro Bravo, the head of the Spanish Football Agents’ Association (AEAF), made the comment Thursday on the “Chiringuito Show,“ one of Spain’s top football TV programs, telling the 22-year-old player to stop celebrating his goals with his trademark dance moves.

The remarks touched a nerve in Brazil, where black players have been heckled with racist taunts by fans mimicking monkeys.

“Although, unfortunately, racism still exists, we will not allow that to stop us from continuing to smile. And we will continue to fight racism every day in this way: fighting for our right to be happy and respected.”

The Brazilian Football Confederation (CBC) meanwhile expressed its “solidarity” with the player in a statement, condemning the “racist statements.”

Real Madrid said it rejected “all forms of racist and xenophobic speech,“ and would “take legal action.”

Bravo apologized on Twitter, saying he had “badly used the expression… in a metaphorical way to mean ‘fooling around.’” – AFP