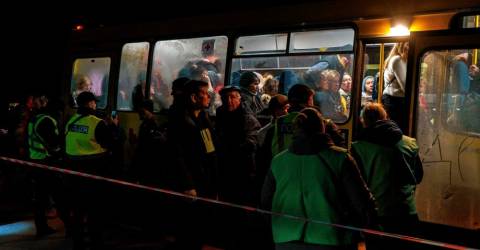 FRANKFURT: Over half of refugees from Russia’s invasion of Ukraine now in the eurozone could enter the workforce in coming years, the European Central Bank said on Monday.

Those fleeing the conflict could have a “medium-term labour force participation rate of between 25 percent and 55 percent for working-age refugees” based on data from previous waves, the ECB said in a new report.

A total of 8.3 million refugees could have left Ukraine by the end of the year, according to the United Nations refugee agency (UNHCR), with a significant number expected to arrive in the 19-member eurozone.

The ban on men between 18 and 60 leaving the Ukraine meant the first waves “have comprised the elderly, children and women of working age”, the ECB said.

The arrival of Ukrainian refugees would produce a “gradual increase” in the size of the labour force in the eurozone, growing by 0.2 to 0.8 percent.

The rise corresponded to between 0.3 and 1.3 million people.

The ECB’s upper estimate of 55 percent was based on the workforce participation rates of working-age women who had migrated to the eurozone from outside the European Union.

Refugee arrivals “could slightly ease the tightness observed in the euro area labour market” at a moment when unemployment was at all-time lows.

The relative lack of workers was a factor being closely watched by the central bank, as the eurozone faced similarly record inflation.

Consumer prices rose at an 8.1 percent pace among the members of the currency club in May, considerably above the ECB’s two-percent target.

Wage growth in the eurozone had “started to pick up”, ECB President Christine Lagarde said after the bank’s last policy-setting meeting on June 9. – AFP