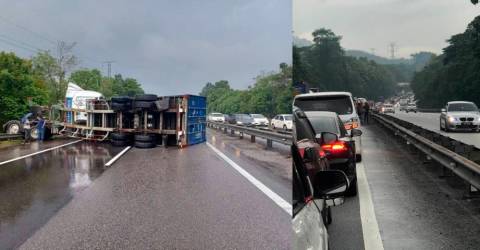 IPOH: A trailer overturned at Kilometre 318.4 of the North-South Expressway (southbound) causing traffic congestion that stretched as far as seven kilometres.

Tapah district police chief Supt Wan Azharuddin Wan Ismail said the accident occurred at 3.20 pm after a container carrying gloves is believed to have lost control and skidded across the road.

The 28-year-old driver, however, escaped unhurt.

“The lorry involved in the accident has been moved to the left lane of the highway and the right lane is opened to all vehicles,” he said in a statement today.-Bernama