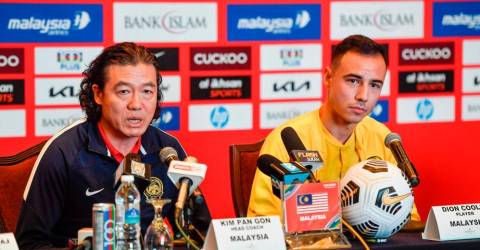 PETALING JAYA: National head coach, Kim Pan Gon felt his team has the upper hand to clinch a victory over Turkmenistan in their first match of the 2023 Asian Cup Qualifiers Group E campaign at the National Stadium in Bukit Jalil, tomorrow night.

Pan Gon said Turkmenistan’s lack of competitive matches is an advantage to his side although based on the world ranking ‘The Greens’ is higher at 134th place compared to the 154th Harimau Malaya squad.

However, the 53-year-old coach from South Korea also admitted that Turkmenistan still has its own strength and thus hoped that his team can give the best performance as demanded.

“That point (lack competitive matches) is our advantage but generally we cannot say anything, they have their own condition but I’m not looking for their condition except ours.

“Last time in Singapore I think we did good and also this camp (training camp) we have done very good session with two good official as well as one unofficial matches. I think we had a very good preparation and we are all prepared at this moment,“ he said at a pre-match press conference here, today.

For the record, Turkmenistan lost 0-1 to Thailand last month in their first competitive match since June 2021 while Malaysia recorded three wins in four games this year, most recently a 2-0 win against Hong Kong at the National Stadium.

Meanwhile, Pan Gon once again reiterated his target to collect seven points overall in the qualifying campaign which sees the Harimau Malaya set to lock horns with Bahrain and Bangladesh on June 11 and 14 respectively which will also be played at the National Stadium after the clash with Turkmenistan tomorrow.

He said tomorrow’s match, the first meeting between Malaysia and Turkmenistan will be the target for his team to collect the first three points.

“If you want to go to the final stage of Asian Cup, we must get seven points and we will try our best to achieve our target,“ he said.

In the meantime, defender Dion Cools refused to take into account Turkmenistan’s ability but hoped that his teammates could stick to the team’s plan tomorrow to achieve success.

“We just want to play our style of football and be dominant on the pitch, maybe it can be a physical game maybe not, that is something we will see tomorrow, so we just need to stick to our own plan,“ said the 26-year-old Malaysian-Belgian player.

The FC Midtjylland player, who is on loan to Zulte Waregem, said that after a year in the national squad, he was more comfortable with his teammates and his confidence level was also improving in every match.-Bernama