Party animal! Bailey the beagle shows off his hilarious moves as he dances in the kitchen

This is the hilarious moment a dog is caught dancing to a hypnotic beat.

Wendy Berenguer, from Naples, Florida, had decided to put on some calming Puetro Rican reggaeton music at her home.

But going into the kitchen, she catches her beagle, Bailey, dancing excitedly to the beat of the tune, much to her amusement.

Wendy shared the video of her beagle’s seemingly impromptu kitchen groove on her Facebook page for the world to see the dog’s impressive skills.

In the footage, the dog can be seen sitting up and twisting from side to side along with the rhythm of the reggaeton track, which originated in Puerto Rico in the 1990s.

As the pooch notices that it’s being filmed, it pauses for a moment, adjusts into another position and resumes wagging its tail and shaking its paws.

The footage has since gone viral, with 15 million people viewing the talented dog’s moves.

Going into the kitchen, Wendy Berenguer catches her dog Bailey dancing excitedly to the beat of some reggaeton music, much to her amusement

But dog owner Wendy might be benefiting from more than just a viral video as a result of the pooch’s hilarious dancing.

Several scientific surveys have shown that owning a dog is good for your heart because they encourage you to be healthier and reduce stress.

Experts at St Anne’s University Hospital Brno, who recently analysed the health of hundreds of people found those who had a furry friend, found dog owners were more likely to be physically active, and also have a better diet. 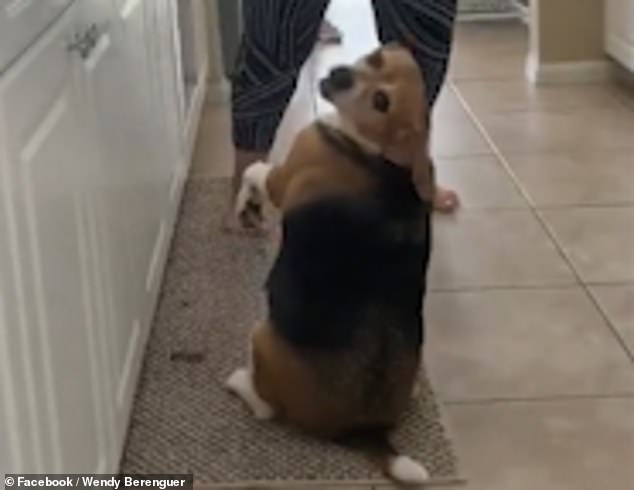 As the pooch notices that it’s being filmed, it pauses for a moment, adjusts into another position and resumes wagging its tail and shaking its paws