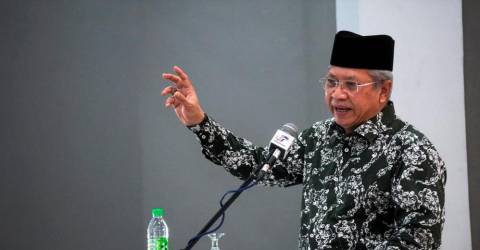 KUALA LUMPUR: Every party member has their own distinct way of expressing their loyalty to the party and it is something that needs to be celebrated, Ketereh UMNO division chief Tan Sri Annuar Musa (pix) said.

In fact, he viewed attempts at questioning the loyalty of those who have spent a lifetime fighting for the party as unwise actions that were capable of making members turn on each other and weaken the party.

“In a nutshell, if deeds are left unremembered, loyal friends misunderstood, then don’t bother talking about loyalty. Don’t backstab,” Annuar posted on his Facebook page today.

The Ketereh MP said that loyalty to the party was very important and it was different from loyalty to individuals, which could sometimes be misconstrued as a sign of party loyalty.

Annuar said faults and individual tendencies to blame the party’s soul, objective and fighting spirit cannot bring about loyalty as it is from an individual aspect and not the party.

“The same goes with admonishing individuals or certain behaviour, it is not a disloyal act towards the party. The party is often used as a shield to hide personal actions. The party cannot be used as a personal right.

“Turning your back on party mandates, not upholding the party’s trust, insubordination towards party decisions, Doing something different without the party’s knowledge, especially when it differs from what the party decided, lying to the party, these are disloyal acts towards the party,” he added. – Bernama