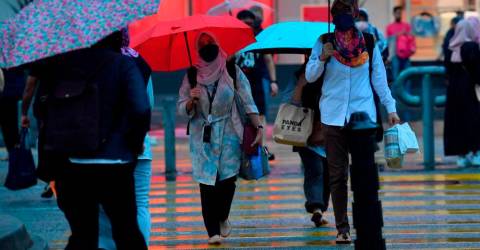 MACHANG: PAS has expressed concern about the possibility of a low voter turnout in the 15th General Election (GE15) in the event of morning downpours on polling day this Saturday (Nov 19).

The party’s deputy president Datuk Seri Tuan Ibrahim Tuan Man said he hoped that voters would go out to vote early as several states were forecast to experience thunderstorms in the afternoon.

“We request voters to go out to vote early, and not to wait until the evening because of the current uncertain weather conditions. I hope that the target of 70 per cent voter turnout across the country can be achieved,“ he said after attending Perikatan Nasional’s Grand Finale Talk at Dataran Kemahkotaan here, last night.

Bernama reported today that based on the weather forecast, some states would experience rain in the early morning on Saturday, with thunderstorms expected across the country in the afternoon.

Although Kelantan and Terengganu are expected to experience continuous rain throughout the day, MetMalaysia does not expect any unusual rainfall for the two states.

For the states in the north, the weather is expected to be good in the morning. – Bernama