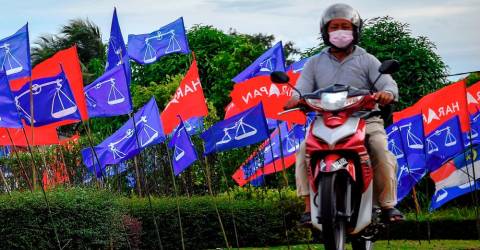 PETALING JAYA: Taxpayers will have to fork out an additional RM1 billion to fund elections if political parties do not agree with holding state elections at the same time as federal polls after parliament is dissolved, said Nusantara Academy for Strategic Research senior fellow Azmi Hassan.

He said while it is the prerogative of each state government to decide when to hold elections, it has always been the practice to hold federal and state polls simultaneously.

“Holding elections at different times will be problematic. (Although) funding for elections has already been budgeted, it is the public who will bear the burden of the extra costs, which could amount to an additional RM1 billion.

“The Opposition, especially PAS, wants to hold on to its state seats until after the 15th general election (GE15) is held for parliamentary seats. This will put it in a better bargaining position.

“It is very unlikely that Barisan Nasional (BN) will win an outright majority, so it will have to partner with another political party and PAS may have just enough seats to persuade BN to make it its ally.”

Azmi said this will put PAS in a better position to defend Kelantan, Terengganu and Kedah, adding that the party was trying to delay the elections as long as possible because it is not in a very strong position even in those states.

PAS is weakening in all three states under its control as BN is getting stronger.

He said the party fears it could lose control of the three states as Bersatu will not be of much help in any of them.

“PAS leaders in the federal government have come under strong criticism over what is seen as their failure to perform. The party could not be bothered about the extra RM1 billion that has to be spent to hold elections at different times, as long as it is able to retain its three states.

“It is trying to delay the elections for political gain. The same also applies to Pakatan Harapan (PH), as they know they are not in a very strong position in Penang, Selangor and Negri Sembilan.”

However, Azmi said there is a possibility the ploy to hold separate federal and state elections could backfire on PAS and PH.

He said this is because the circumstances could provide BN with the ammunition it needs to criticise the two parties for only being interested in staying in power and forcing the government to spend more money while the public continues to suffer from the high cost of living.

Universiti Malaya political analyst Awang Azman Awang Pawi said PAS wants to delay the elections for as long as possible due to the low support the party has.

He said the party has two main worries – criticism of its leaders’ failure at the federal level and the possibility it could lose parliamentary seats if GE15 is held at the same time as state polls.

Awang Azman said holding state and federal elections at different times could provide PAS with enough time to strengthen its position in the three states it controls.

“It will be tough for PAS to defend Kedah and Terengganu because BN has been getting popular. In Terengganu, the party holds only a five seat majority over Umno, putting it in a precarious position.

“It is unlikely that PAS would lose Kelantan but it may lose seats to BN. Therefore, holding separate elections would help the party defend the three states from a better position. PH is also in a similar position.”

Awang Azman said PH is trying to delay the elections until it is able to complete its “Ayuh Malaysia” programme, which will allow it to determine the level of support it has.

“PH has always been very vocal in calling for elections and criticising Prime Minister (Datuk Seri) Ismail Sabri Yaakob. But the coalition remains silent when it comes to discussing its position.

“When people start talking about spending huge amounts of money for elections, it must be remembered that the money has already been budgeted. The cost of holding GE15 next year might even be higher than holding it now,” he added.