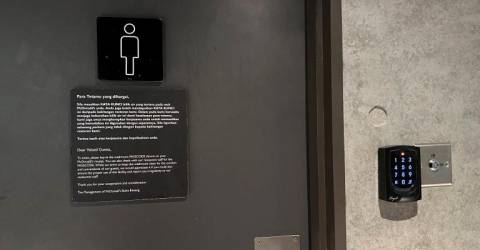 RECENTLY, in a post that a patron shared, he revealed that a popular fast food outlet in Kuala Lumpur has locked its toilet door and required a password to use the facility.

The post has gone viral and left plenty of netizens amazed with such move.

Social media users have also pointed out that the Bukit Bintang McDonald’s outlet has implemented the password system for some time now, in light of instances where some visitors have taken advantage of the facilities without paying for a meal.

“Shops that give out their WiFi passwords are common,

McDonald’s outlets that give the passwords to their toilets are extraordinary,“ one netizen wrote.

However, the practice may not be as uncommon as one would think, as several social media users has responded and explained that the protocol of keeping toilets locked in McDonald’s outlet is commonplace in regions such as Europe, likely to prevent vandalism and abuse of the facilities.