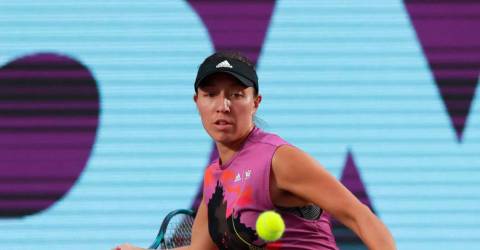 THIRD seed Jessica Pegula overcame a sluggish start to breeze past Victoria Azarenka 7-6(3) 6-1 on Saturday and make the final of the Guadalajara Open, where she will meet Greek fourth seed Maria Sakkari or Czech Marie Bouzkova.

The 28-year-old American, chasing her second career title, found herself in an early hole to the Belarusian former world number one as Azarenka sealed the early break on the way to a 3-0 lead in the opening set.

But Pegula would soon find her rhythm, breaking back to send the set to a tie-break, which she took 7-3.

Having let the first set slip away Azarenka unravelled while Pegula stepped up her play, breaking the two-times Australian Open champion twice as she steamrolled through the second to reach her second final of the year.

“I feel really excited, really happy about my performance today. Happy the way I hung in that first set and was still able to win it,“ Pegula, who also reached the final in Madrid this year, told reporters.

“My second final this year means a lot, especially kind of the last tournament of the year to finish really strong, win or lose tomorrow, is just kind of the icing on the cake of two really good years. I’m really proud of myself.”

She will have to wait until Sunday to discover her final opponent as rain forced play to be suspended in the second semi-final after Sakkari won a tight opening set 7-5.

But the world number five said there were still some nerves heading into the title clash.

“At the same time you’re happy to be there,“ Pegula said. “You have pressure and you also don’t have pressure because when you start a tournament your goal is to get to the end and to give yourself a chance to win a title.

“When you finally make it to the last stage, you get more excited nervous. But it depends on the day. I’m sure I’ll see how I feel walking on court tomorrow, how my warm-up feels.” – Reuters