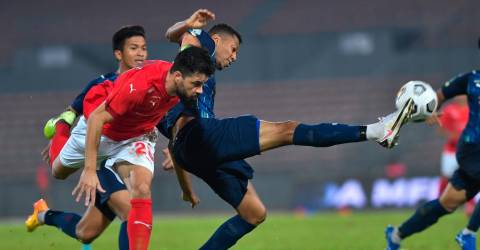 KUALA LUMPUR: Penang FC continues to monitor the condition of its two defence stalwarts while trying out other players in the position ahead of their Malaysia Cup action against Sri Pahang FC on October 30.

The Panthers’ defence seemed crippled without the strengths of Khairu Azrin, 30, and 28-year-old import player from Brazil, Vitor.

The team remain winless after their first two matches in Group A, the first a draw 1-1 with Kuala Lumpur and the next a 1-3 defeat to Sarawak United.

With the Malaysia Cup competition set to resume after the recent international break, Penang FC, however, do have options such as Danial Ashraf, Latiff Suhaimi and Ryuji Utomo to fill the vacuum.

“Both Khairu Azrin and Vitor have always been in the first 11 this league season.

“But now I am still striving to find the best replacements while waiting for them to be able to return to action,” he said.

“Sincerely, I am still giving the opportunity to those players who rarely play to always prepare themselves to be fielded and can perform as best as possible if given the chance,” he said via a Malaysian Football League (MFL) statement, today.

Penang FC is third in their group with one point while Sarawak United lead with six points followed by Kuala Lumpur with four points.

Sri Pahang is at the bottom of the heap with no points.-Bernama