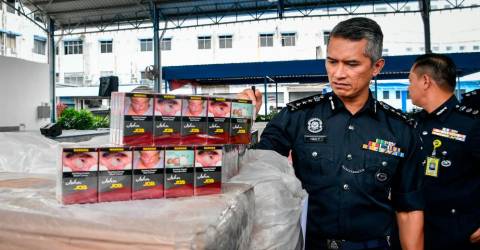 “We confiscated 198 large boxes containing 9,990 cartons of cigarettes valued at RM764,000. The overall tax was estimated to be around RM1.32 million,” he said at a press conference here today.

He also said that based on their investigation, the four arrested men were all from Selangor and they were members of a syndicate selling smuggled cigarettes.

One was a lorry driver and the others were caretakers of the warehouses.

Mohd Shuhaily said the modus operandi of the syndicate was to obtain the supply of the contraband cigarettes from the Klang Valley before being transported to the warehouse using a lorry and has been distributing the contraband around Penang since a year ago.

“To evade detection, the syndicate will stop between 300 meters and 500 meters from the warehouse before a car comes to take the contraband to the warehouses,” he said.

He said that in the raid, the police also confiscated a lorry and four cars believed to belong to the suspects, all of which were worth RM236,000.

According to him, the four men have been remanded for 14 days until Oct 11 to assist in the investigation and the case is being investigated under Section 135 (1) (d) of the Customs Act 1967.

“From January to September this year, we have successfully conducted 61 raids and arrested 75 people involved in the cigarette smuggling syndicate or evasion of tax amounting to RM3.037 million,“ he added. – Bernama