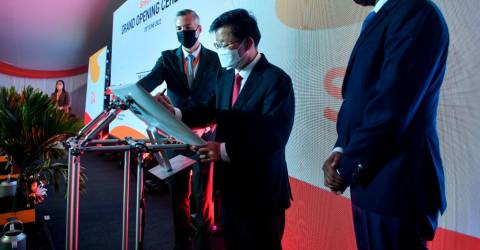 BATU KAWAN: Penang recorded approved manufacturing investments totalling RM6.3 billion in the first quarter of 2022, paving the way for it to be among the country’s top contributors in terms of total investment inflow this year, Chief Minister Chow Kon Yeow said.

“The state’s commendable performance that continues to punch above our weight is testament to our resilient industrial ecosystem, placing us at the forefront of industrialisation,” he said in his speech at the grand opening of Smith & Nephew’s manufacturing facility here today.

On the trade front, Chow said Penang topped the nation’s list in 2021 with an all-time high export value of RM354 billion. “Electrical and electronic products and medical devices made up about 80% of our total exports last year,“ he said.

With the opening of Smith & Nephew’s first manufacturing facility in Southeast Asia here, Penang is becoming a medical device hub in the region

Smith & Nephew, a global medical technology company, opened the new high-technology manufacturing facility in Batu Kawan Industrial Park in Penang with an investment worth over US$100 million (RM439 million).

The facility will primarily support the company’s orthopaedics business, which is expected to grow strongly in the Asia Pacific region.

“Up to 800 new local jobs in manufacturing, engineering and supply chain will be created over the next few years with key roles already filled,” it said in a joint statement with the Malaysian Investment Development Authority today. – Bernama