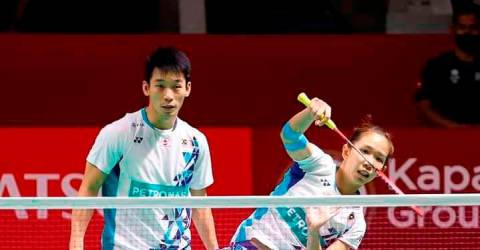 KUALA LUMPUR: The mixed doubles section of the national squad is getting smaller and sinks deeper in trouble, when three players decided to leave the Badminton Association of Malaysia (BAM) on Nov 30.

Earlier, Hanoi SEA Games gold medalist, Peck Yen Wei, 26, had confirmed leaving BAM after 10 years of service with the association, due to injury.

Kenny said the association tried to talk with Peng Soon to stay at the Academy of Badminton Malaysia (ABM), but the player felt its better he withdraw and focus on his academy.

“He felt it was the right time to come out. Even though Peng Soon was not very happy with his performance, he has contributed a lot in helping young players at BAM. We also tried to persuade Yee See to stay by telling her the plans we have for her after this.

“She then asked for time to think it over and we just accepted her decision that she still wants to leave. She didn’t give a reason, she just felt that it was time to leave,“ he said at a press conference at ABM.

Meanwhile, BAM doubles coaching director Rexy Mainaky is optimistic that his side has time to produce a mixed doubles pair capable of competing in the 2024 Olympics with the ‘Race to Paris’ qualifying period going on from next May 1 to April 24, 2024.

“It’s not that we don’t have a direction, we have plans for some players from the men’s and women’s doubles who can be featured in the mixed events. We have already seen the ability of some pairs and there are still a few tournaments to evaluate the new pairings before May.

Peng Soon-Yee See, who started pairing last June, have struggled to form a powerful combination, which saw them exit in the first round at the recent Denmark Open and French Open, forcing them to withdraw from the Hylo Open in Germany this week.

Their best achievement so far was the quarter-finals of the Vietnam Open in September.

Since Peng Soon returned to BAM after ending his 13-year partnership with Goh Liu Ying, he has tried partnering with Valeree Siow and Toh Ee Wei, before being paired with Yee See.

Yesterday, Liu Ying who won silver in Rio with Peng Soon, also announced that she will hang up her racket after the Malaysian Open 2023, next January. Liu Ying is currently playing with Low Juan Shen as a professional player.

Meanwhile, BAM in a separate statement said, Peng Soon, Yen Wei and Yee See have decided to chart their own destiny in the sport by opting to become independent players.- Bernama