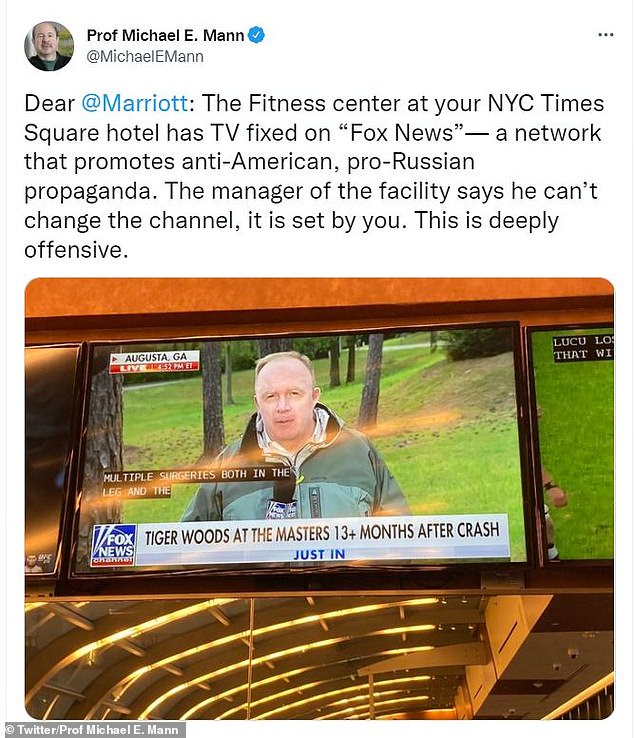 A professor pulled the ‘Don’t you know who I am card?’ to try and bully Marriott into banning Fox News from being played on a TV at a NYC hotel gym.

Michael Mann, who leads the atmospheric science department at Penn State University, tried to shame the hospitality giant into changing the channel by bragging about his Twitter following.

The pompous professor began his quest on Saturday, having spotted the offending channel being played while working out at the Marriott Times Square’s fitness room.

He took to Twitter and raged: ‘[email protected]: The Fitness center at your NYC Times Square hotel has TV fixed on “Fox News”— a network that promotes anti-American, pro-Russian propaganda.

‘The manager of the facility says he can’t change the channel, it is set by you. This is deeply offensive.’

Marriott initially ignored his screed and follow-up nags from Mann, prompting the egotistical academic to up the ante by boasting about his 206,400 followers.

He sniped: ‘Hi @MarriottBonvoy — Don’t want to pull rank, but I’ve got more followers than you. And the tweet now has 3k+ likes, 130k+ impressions and 10k+ engagements. And a large number of folks have said they’re no longer staying at @Marriott full stop. A response would be appropriate.’

Mann expressed his frustrations in a Tweet, calling the ordeal ‘deeply offensive’ 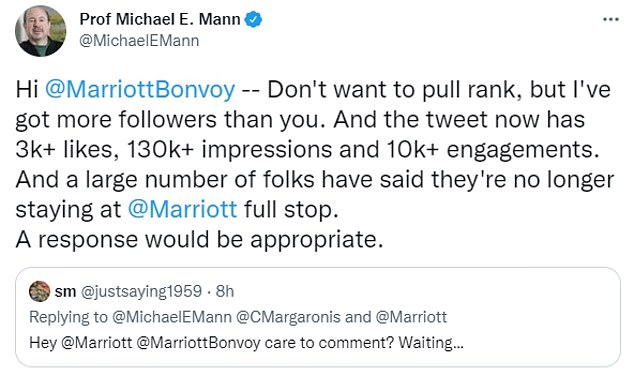 He then followed up by menacing Marriott with the size of his following – 206,400 people 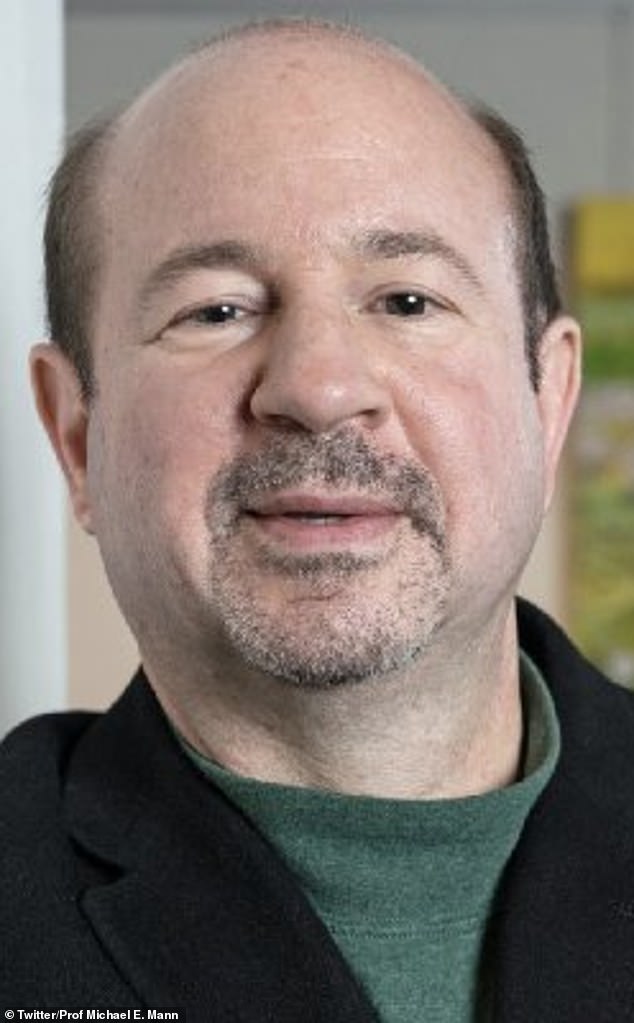 Michael E. Mann, who is a professor of Atmospheric Science at Penn State, blasted the Marriott on Twitter for showing Fox News in the gym of the Times Square hotel

In response to the tweet, Mann received a large amount of support from those with a common distaste for the conservative news network, who were ready to denounce the Marriott on the spot.

But the academic – who appears to spend much of his day retweeting progressive outrage on Twitter – also received backlash from people who called him an officious ‘Karen’, and who pointed out that he could just ‘change the channel.’

Among those who blasted him were journalist Glenn Greenwald, who accused Mann of having a ‘barren life’ and nothing better to do than complain about hotel TV channels. 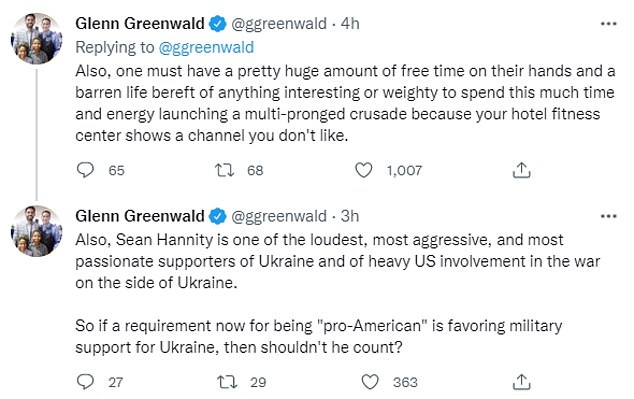 Journalist Glenn Greenwald was among those who mocked Mann’s antics

Mann replied that ‘that isn’t the point’ and continued to tweet at Marriott, demanding a response, while pointing out to the company that a slew of once loyal customers of the hotel are now threatening to go somewhere else.

His attention-seeking antics eventually yielded results. Nearly 24 hours after Mann’s rant on Twitter, he tweeted that the Marriott had finally responded and addressed his concerns.

‘I am pleased to report that the manager of the hotel has gotten back to me and has informed me that this is NOT the policy of this (i.e. to have a single, namely Fox, news channel on the TVs in the fitness facility as was the case yesterday).’ 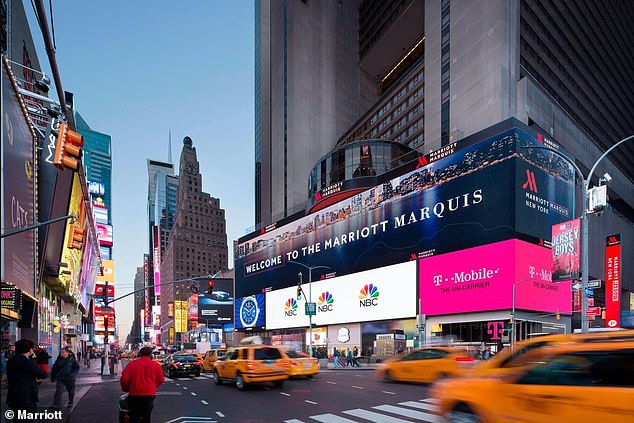 Mann said it was ‘deeply offensive’ that a TV was fixed on Fox News in the fitness center of the Marriott’s Times Square location (pictured), and the hotel employee refused to change it 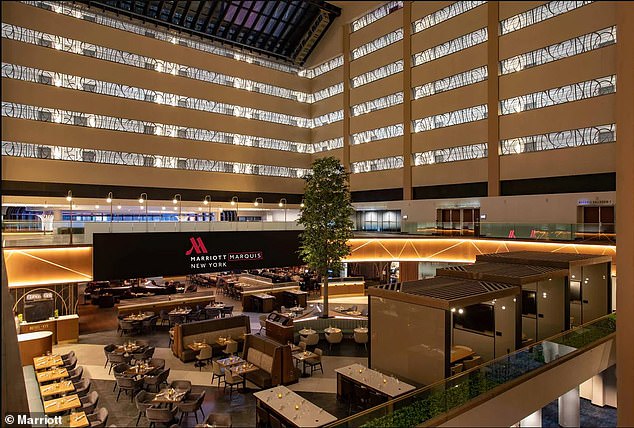 Nearly 24 hours after Mann’s rant on Twitter, he tweeted that Marriott had finally responded and addressed his concerns

Mann continued with a Twitter thread that the Marriott had told him that the channels can be changed at the request of the guests.

‘He informed me that, contrary to what the presiding employee indicated yesterday, the channels CAN be changed in response to the requests of their guests (yesterday Fox was the only news channel; the rest were sports channels),’ he tweeted.

For those who supported Mann and threatened to drop their Marriott elite status, and give their business to a different hotel, he urged them to not hold this incident against them.

‘I take him at his word, and I am pleased to hear this. I So I do not hold this incident against either this Marriott hotel or the chain, and neither should you.’

A final tweet in the thread was a thank you to the manager of the hotel.

‘Kudos to the manager of the hotel for reaching out to me,’ it read.

Mann added that he does not hold this incident against Marriott

Mann is Distinguished Professor of Atmospheric Science at Penn State, with joint appointments in the Department of Geosciences and the Earth and Environmental Systems Institute. He is also director of the Penn State Earth System Science Center.

In Fall 2022, he will become Presidential Distinguished Professor in the Department of Earth and Environmental Science at the University of Pennsylvania.

He received the Leo Szilard Award of the American Physical Society in 2021 and is the co-founder of the award-winning science website RealClimate.org.