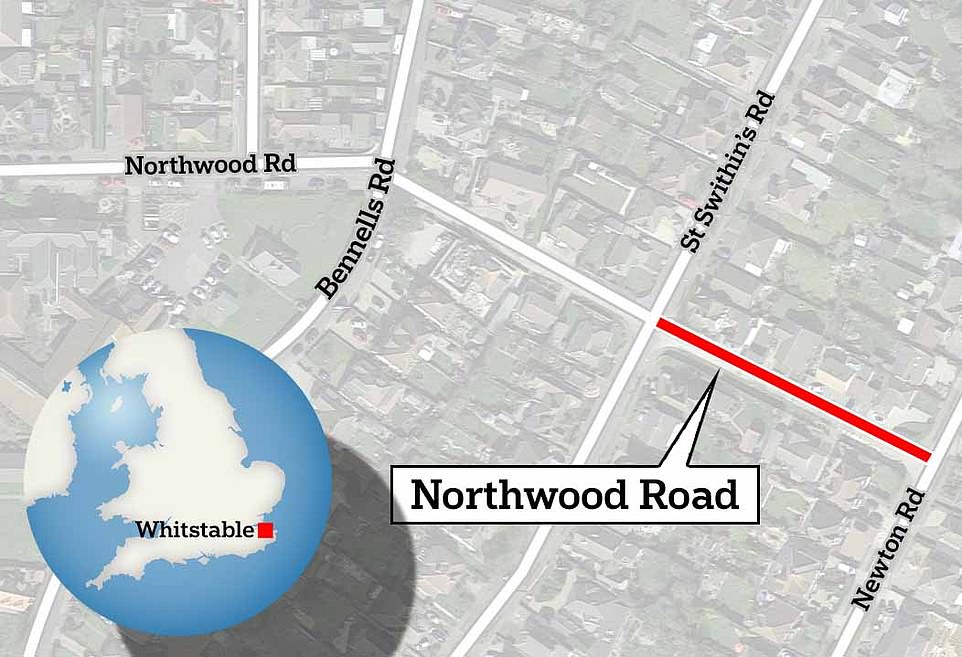 A pensioner spent thousands of pounds making his road ‘the shortest in the country with speedbumps’ after his grandchildren became too scared to play outside.

Adrian Kent said he was forced to try and tackle reckless drivers pelting down his road after vehicles, include a car transporter, were repeatedly flicking stones onto houses, even allegedly smashing a car window.

Have you had to put in your own road safety measures?

With the help of a neighbour, Mr Kent paid £8,000 for new speedbumps to be put along the narrow private street in Whitstable, Kent, which is just over 100 yards long and is the responsibilty of the homeowners rather than the council.

But the DIY ramps failed to stop motorists from hurtling through the 5mph zone at speeds of up to 40mph.

‘A neighbour’s car window was smashed by stones flicking up and some of the stones are quite big.

‘We’ve even had a car transporter through here. We moved here in 2018 and by 2019 we thought we would try to do something about it.

‘I thought if we were to repair it we would do a permanent surface so we decided to put the bumps down.

The  narrow, private road used to be a dirt track but has been tarmacked with speedbumps added by Adrian Kent. The road was being used by large vehicles as a through road and as it was a private road, there was no formal speed limit 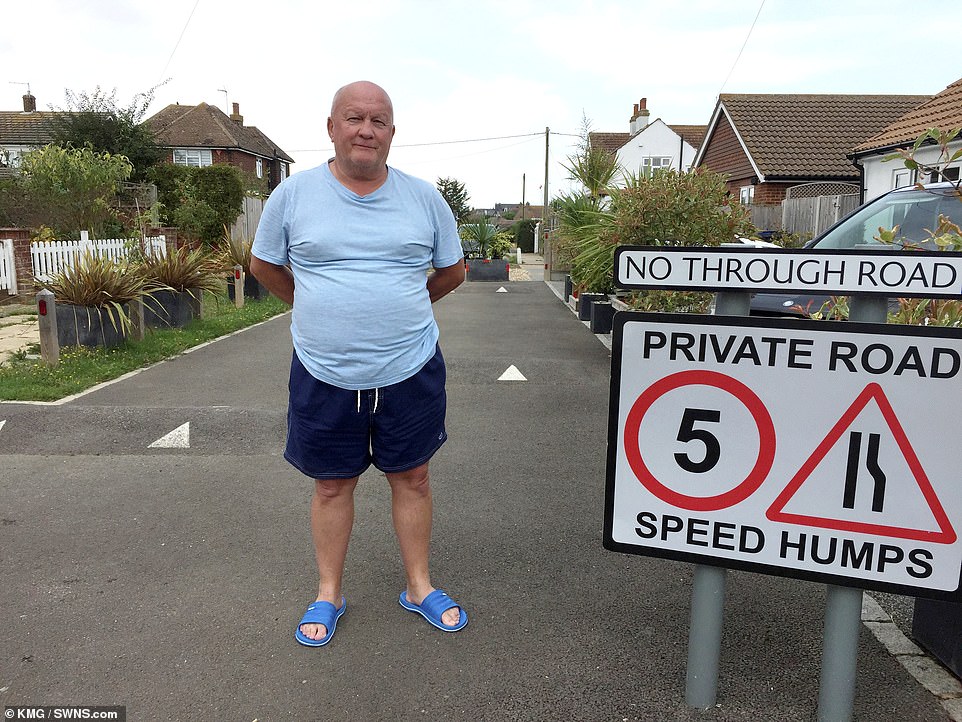 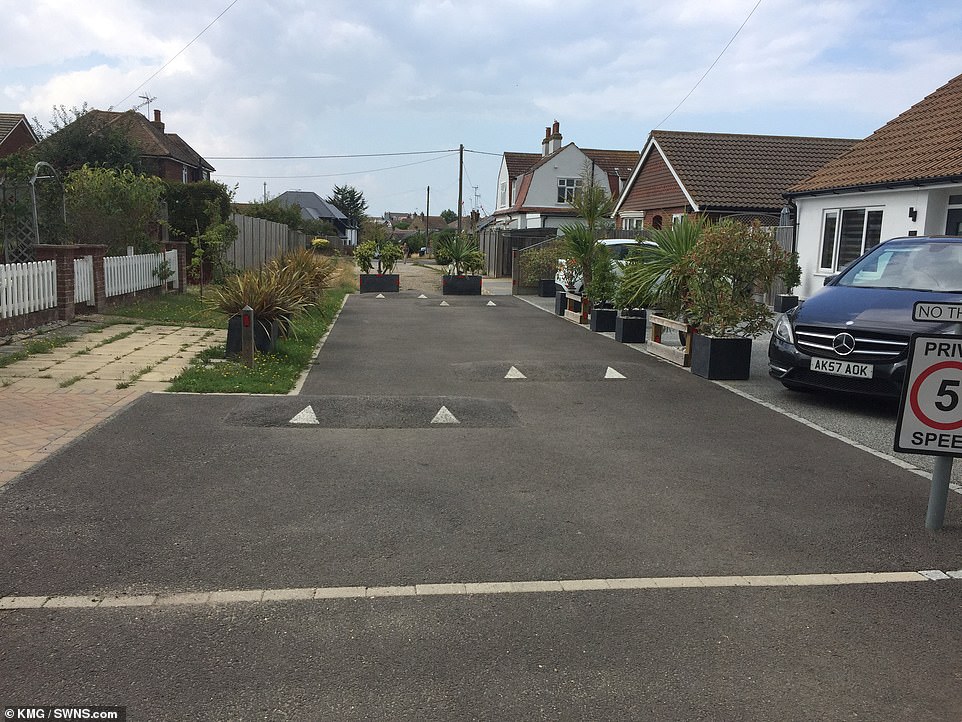 The street (pictured) in Whitstable, Kent, is only 100 yards long, making it one of the shortest roads with speedbumps in the country 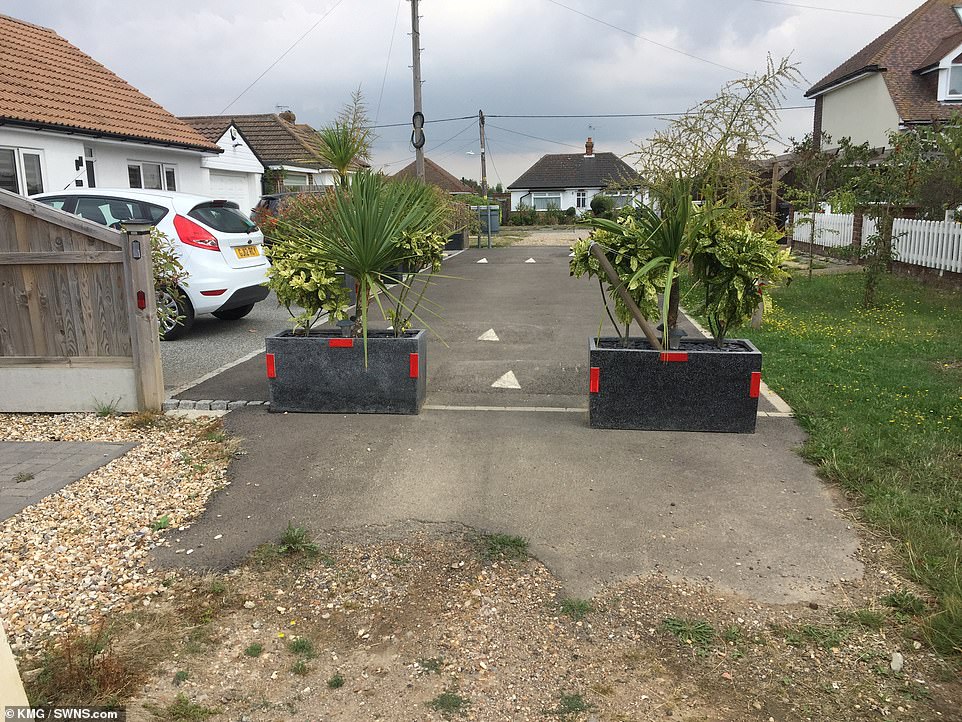 ‘We spoke with the neighbours and they agreed but they weren’t interested in paying.’

Residents have been joking about the seemingly excessive measure, with one on Facebook posting: ‘Is the shortest road in the country with speed bumps?’

Another laughed: ‘Must have a councillor living in the street.’

Despite the cost of the deterrents racking up to £8,000, Mr Kent thought the way people responded was amusing.

He said: ‘It’s quite funny when you think about it. Maybe I could enter the Guinness Book of Records.’

Despite the laughs, another resident sincerely jumped to his defence and praised him for taking action.

She said: ‘We live close-by and have witnessed, prior to these changes to the road layout, two or three occasions where delivery drivers have nearly hit the children from Swalecliffe Primary School as they walk home.

‘The road was often used as a cut-through and was becoming more dangerous by the day.

‘I can only thank the homeowners for making this safer for the children and other pedestrians at their own expense.’ 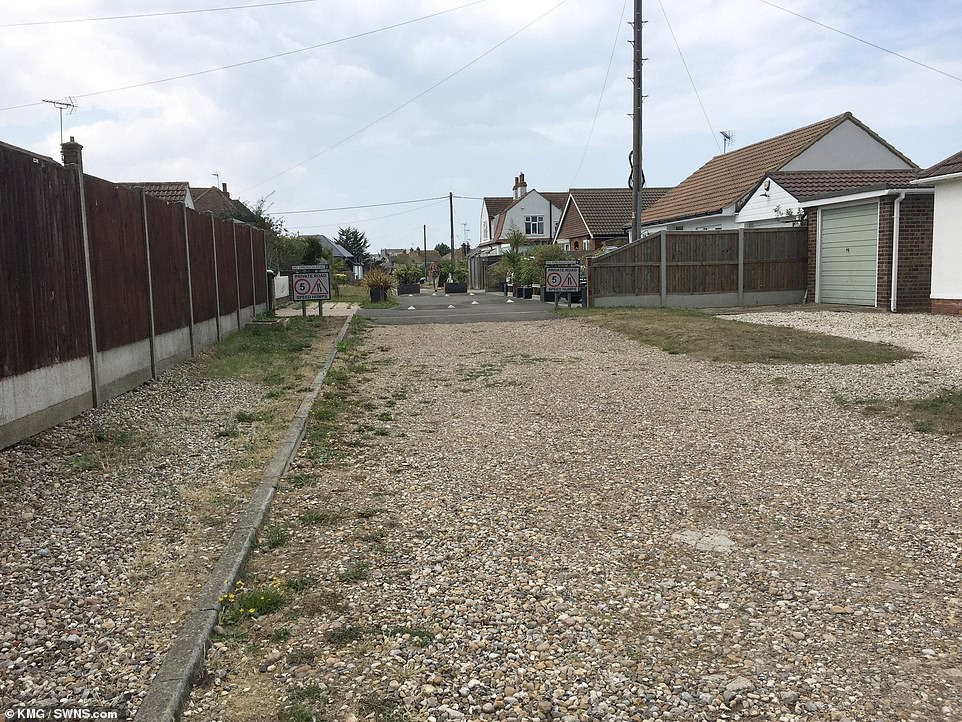 Vehicles driving through at speed flick up stones onto the houses, and have even allegedly smashed a car window 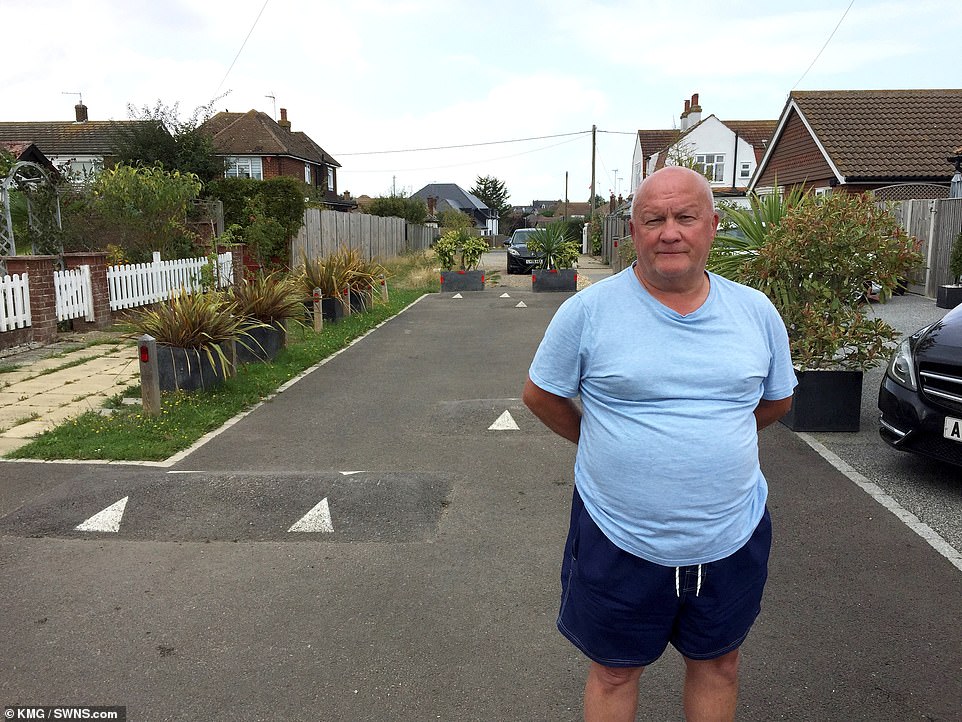 Mr Kent has admitted that paying and installing the speedbumps was a waste of time and money, especially when a cement mixer spilt its load all over the street after hitting one of the bumps

But after installing the tarmac and the speedbumps, Mr Kent admitted it was a waste of time and money.

The final straw came when a cement mixer hit one of the bumps and spilt its load all over the street, leaving Mr Kent with a two-hour cleaning operation.

Since this set-back he blocked off part of the road with planters, and for the past 18 months Kent County Council Highways, the fire service and police have raised no objections. 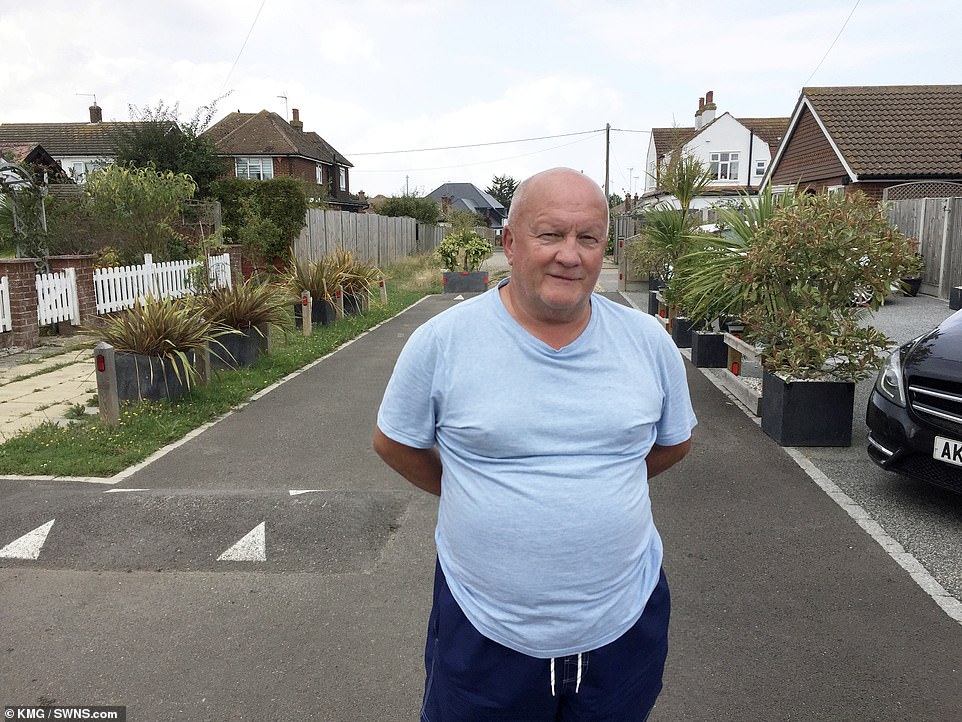 Mr Kent has said that for the past 18 months Kent County Council Highways, the fire service and police have raised no objections 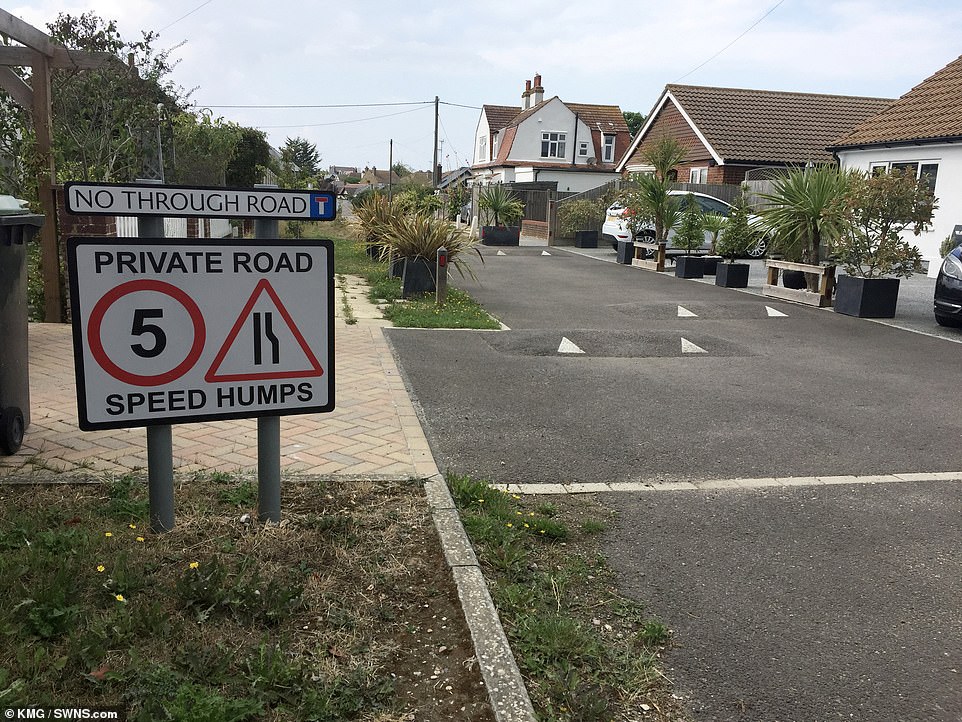 With the help of a neighbour, Mr Kent paid for the speedbumps to be installed himself, which cost around £8,0000

The planters have been a success, he said: ‘It’s lovely and quiet now, but the amount of traffic coming down here was quite something before.

‘I had the feeling people liked driving on the dirt road – especially the young guys.

‘It has given us long-term stability over the road surface and it is safer.’