The Pentagon is setting up quarantines at 11 additional quarantines on military bases in anticipation of an influx of US citizens returning from China and in need of monitoring for coronavirus.

So far, 12 people in the US have been diagnosed with coronavirus and the Pentagon had previously agreed to house 1,000 people in 14-day quarantines.

Now, with five planes having returned to the US with evacuees from Wuhan, the epicenter of the coronavirus outbreak, the number of people detained under quarantine is approaching that originally agreed upon number.

Hospital officials, too, are worried about bed space with the flu season in full swing and the threat of coronavirus cases looming. 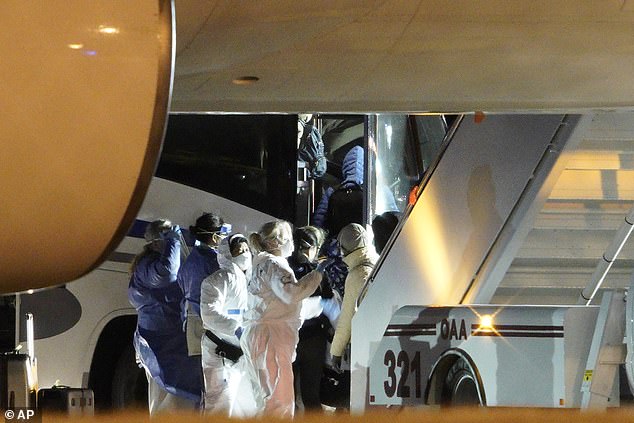 The last of the scheduled evacuation flights from Wuhan landed last week, and passengers were received by medical staff to transport them to quarantine 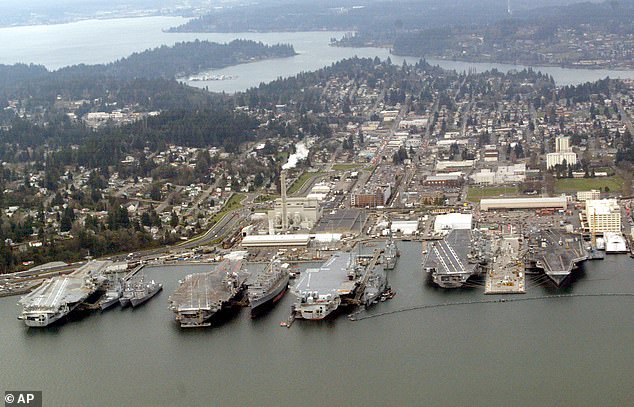 Naval Base Kitsap (pictured) in Washington, will now be a quarantine location for travelers who fly into Seattle-Tacoma International Airport

New quarantine centers will be opened at:

The additional quarantine locations were added at the request of the Department of Health and Human Services (HHS), which also announced Friday that the White House was prepared to commit $110 million to the global fight against  coronavirus.

Over the weekend, China saw its deadliest day for coronavirus patients yet, with nearly 100 fatalities in a single 24-hour period.

And on Saturday, the first American to die of coronavirus – a 60-year-old person – was reported from Wuhan.

At least 800 Americans evacuated from Wuhan are currently under federally mandated quarantines.

Quarantines had already been set up by the Department of Defense at Fort Carson in Colorado, Travis Air Force Base and Marine Corps Station Miramar in California. 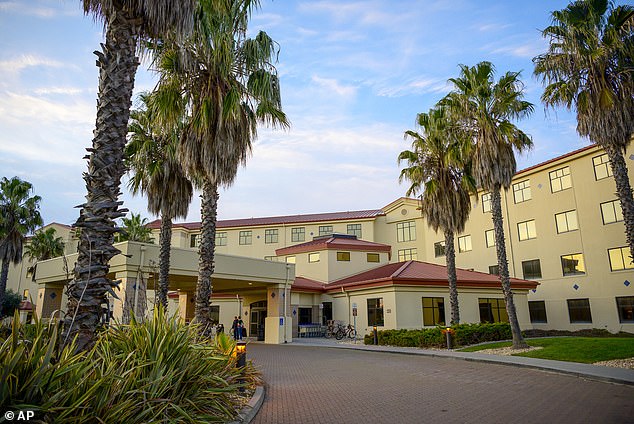 So far, that State Department has not scheduled any additional flights to evacuate Americans from Wuhan.

However, officials expect a slow trickle of passengers returning from other locations who have been to the Hubei Province – where Wuhan is located – within the past two weeks to continue.

No cases of coronavirus have thus far been confirmed from any of the US quarantine locations.

On two cruise ships, on the other hand, the virus has spread with alarming speed among quarantined passengers. There are now more than 66 cases confirmed on the Diamond Princess, currently docked in Japan.

Among the ship 3,700 ship passengers, 45 Japanese people, three people from the Philippines, four from Australia, one from each Canada and Ukraine and 11 Americans have all been infected.

While US health officials continue to reassure Americans that coronavirus is not spreading in communities in the US – the only two cases of human-to-human transmission are among husband-and-wife pairs – hospitals are bracing themselves.

This year has already been a relatively bad one for flu, meaning hospital beds are filling up fast.

‘Usually at this time of year we see that level of occupancy, but it’s significant knowing that we have to be concerned if we need surge capacity if this [coronavirus] really takes hold in the United States.’

Dr Jarrett estimates that out of 6,200 beds, 6,200 are full on average, as some locations may have empty beds, but others have multiple patients facing 24- to 48-hour waiting periods in emergency rooms before beds become available for them.

No cases have been confirmed in New York so far and Dr Jarrett is takes a measured view of coronavirus. For most people, he says, the virus won’t be any more serious than other viral respiratory illnesses.

But that doesn’t mean he’s letting his guard down that there may be cease.

‘I think it’s something to be concerned about because of global travel – and regular travel – between places, so i think we’re at more risk than we would’ve been 50 years ago,’ he says. 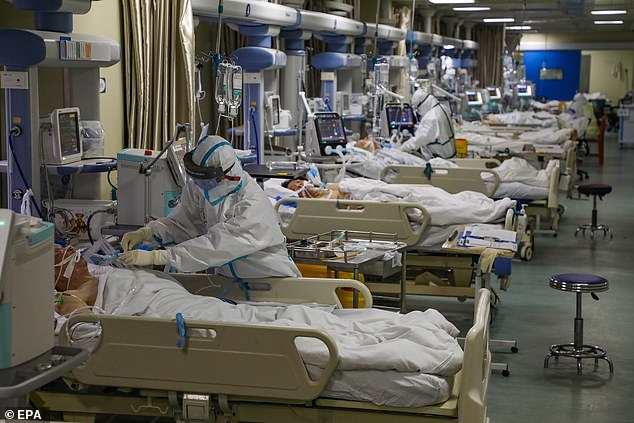 In Wuhan, medical staff are working in full ICUs to care for coronavirus patients in isolation. So far, the virus is not spreading in the US, but hospitals are already at capacity with flu patients and bracing for a potential influx of patients of the new virus that’s sickened 12 Americans

‘We’re not really seeing it spread within the US at this point, we’ve been lucky, not enough cases have occurred with human-to-human transmission.

‘But once that starts occurring locally – if it does – it will probably spread just like it did in China.’

Northwell, like most hospitals, has contingency plans for surge capacity, but the spread of a new virus in tandem with the regular flu could pose a steep challenge to the system.

Hospitals like Dr Jarrett’s could be forced to reopen floors closed for construction, tap other facilities, and start isolating patients in ‘cohorts’ rather than by themselves.

In addition to space, hospitals could be strained for supplies.

So far, Dr Jarrett says his hospitals are ‘good on supplies’ like masks and other personal protective gear, but he’s looking warily to the future.

Already, Northwell staff have been briefed on how to safely reuse their masks depending on the illnesses of the patients they’ve seen.

He adds that the longer coronavirus can be kept at bay from becoming a pandemic, the better, as that will give suppliers a chance to ramp up production of masks and other sanitary and protective gear.

Dr Jarrett has his concerns, but isn’t yet terribly afraid of the virus which seems to have a low mortality rate, but also cautions that it’s too soon to tell what coronavirus will do.

Over the weekend, deaths from the infection surpassed those from the 2003 outbreak of another coronavirus that caused severe acute respiratory syndrome (SARS), but he says that doesn’t mean this outbreak will ultimately be any worse – or less devastating.

‘SARS was controllable, it eventually petered out,’ he says.

‘What we don’t know is if this is a virus that will peter out or just continue to spread in the community and be impossible to just completely shut out.’

In the latter case, the world could end up with another annual epidemic that co-occurs with flu season.