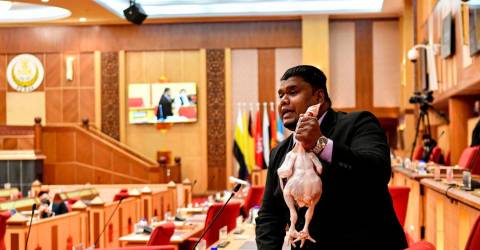 IPOH: A Perak assemblyman protested against the increase in the price of chicken by bringing a fresh chicken to the state assembly sitting today.

Muhamad Arafat Varisai Mahamad (PKR-Hulu Kinta) shocked the assembly hall when he took out the chicken from a plastic bag during the debate session on the Supply Bill 2022. (pix)

He said the increase in the price of chicken was a burden to the people and claimed that there was no serious action from the authorities.

“Since Friday until today, the answers from the state executive council (Gunung Semanggol assemblyman Razman Zakaria) have not been convincing and there are no concrete plans to resolve the issue.

“So, today, I brought a ‘special gift,‘ purchased from Gunung Semanggol together with the receipt, which cost more than RM10 per kg,“ he said.

Muhamad Arafat said he had to bring the chicken into the hall because he did not see any efforts made by the Plantations, Agriculture and Food Industry Committee chairman including holding meetings with retailers and entrepreneurs to see the real problem.

The action drew cheers from the assemblymen and one of them interrupted by saying “put the chicken down…go back and make rendang.”