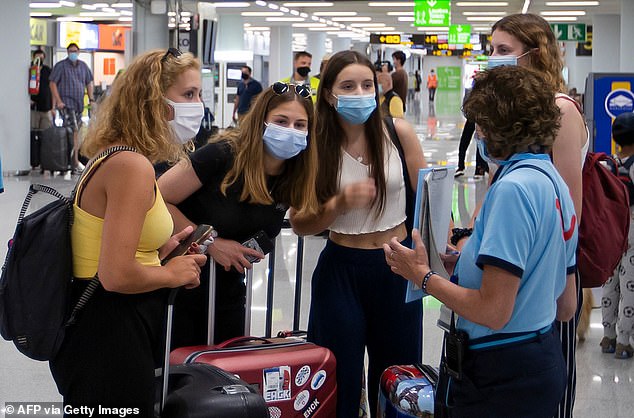 The most common symptom of Covid-19 is that you feel just fine. A huge number of those now being absurdly listed as ‘infected’ with this bogeyman disease are perfectly healthy.

If the trained hunters of the Government’s National Panic Service had not tracked them down, most of them would never have known they were supposed to be ill. Why do we take this seriously?

It is a fact, not a ‘conspiracy theory’, that the power of the state is now being used to keep us in a condition of perpetual alarm. We are ceaselessly threatened with a ‘second wave’ for which there is, in fact, no evidence.

No escape: A holiday rep warns British tourists arriving in Majorca last week about the new quarantine rules. According to the Coronavirus Worldometer, the daily Covid deaths in Spain for the past few weeks have rarely risen above five a day, and have often been fewer than that

As I began to write this, I received a ridiculous text message from my GP squawking urgently: ‘We have been made aware that the number of coronavirus cases in Oxfordshire is starting to rise.’

No doubt Oxford will be one of the next cities to undergo some sort of renewed shutdown, to keep us in our place. This fatuous propaganda is just preparing the way. The more scared we are, the more we obey.

It ended by intoning: ‘We must each do our bit to protect ourselves and others.’ The use of the phrase ‘do our bit’, of course, invokes the phoney Blitz spirit that is used against anyone who looks at the actual researched facts and says, as I do: ‘Don’t be silly.’

For daring to stay calm, I am then accused of being a collaborator with the wicked Nazi virus. The played-out, once-independent magazine Private Eye, now a boring mouthpiece of wokeness, actually did this to me last week. 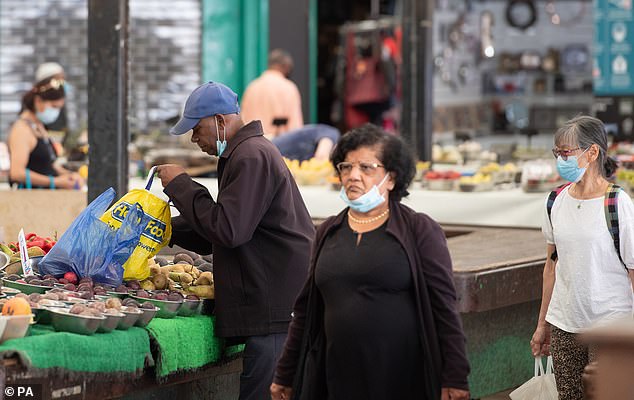 People are pictured shopping at Leicester market. It is a fact, not a ‘conspiracy theory’, that the power of the state is now being used to keep us in a condition of perpetual alarm

The truth is that the number of deaths from Covid, even the fiddled and inflated version which the Government clings to, is falling closer and closer to zero.

So, even more significantly, are hospital admissions, which would be rising steeply if these ‘infection’ figures actually represented large numbers of seriously ill people.

These things are true both of Britain and of Spain, whose supposed spike in Covid was used to destroy the holiday plans of more than a million people last week in an arbitrary decision of astonishing uselessness.

At the peak of the epidemic in April, Spain at one point suffered 961 deaths in one day.

According to the Coronavirus Worldometer, the daily Covid deaths in Spain for the past few weeks have rarely risen above five a day, and have often been fewer than that.

And for this we destroy the happy innocent pleasures of hundreds of thousands, and deal another smashing blow to a travel industry already devastated by Government folly? Why do we put up with it? I have no idea.

Welby is such a pathetic prelate

The Archbishop of Canterbury, Justin Welby, is, in my view, prissy, pathetic and political. He has utterly failed to stand up for his church against its first compulsory shutdown since the days of Bad King John eight centuries back.

Not long ago Welby supported the disgraceful smearing of a man whose mitre he would not have been fit to carry, the courageous and selfless Bishop George Bell of Chichester (please, please do not confuse Bell with the revolting criminal Bishop Peter Ball, with whom he is not remotely connected). 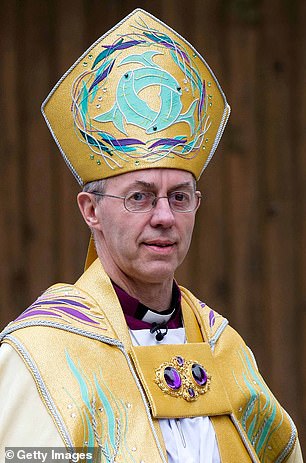 The Archbishop of Canterbury, Justin Welby, is, in my view, prissy, pathetic and political

Bell, long after his death, was wrongly labelled as a child abuser by a secret kangaroo court of the Church of England, which did not even bother to look for living witnesses for the defence.

When this outrage was met with a wave of fury from the many who had known and loved Bell, an independent inquiry tore the case against him to shreds.

But even after Bell was cleared to the satisfaction of all open-minded people, Welby (like many weak men reluctant to admit an error) continued to insist that a ‘significant cloud’ still hung over Bell.

Am I now entitled to see a spot of divine retribution in the revelation last week that the C of E is investigating how Welby dealt with complaints of serial abuse of young men at Christian holiday camps? Well, I do.

One of those affected has now written to the Church with a formal complaint against the Archbishop, once a dormitory officer at the camps, saying Welby did not do enough when he learned of the abuse.

The man claims Welby failed to refer the abuse directly to social services and the police, in breach of church guidelines.

Welby has always said he knew nothing of the allegations until 2013, when the Church referred them to the police. Well, no doubt Welby will be cleared of all this. But will he then proclaim that a ‘significant cloud’ still hangs over himself? Or will he learn that if you desire justice for yourself, you have to desire it for others?

In France, a brief flash of good sense. The new Prime Minister, Jean Castex, is introducing on-the-spot fines for marijuana possession, partly because of the obvious link between this allegedly ‘soft’ drug and criminal violence.

He announced the plan during a visit to Nice, which has recently suffered weeks of drugs-related violence.

I only hope his security chiefs have finally spotted the fact that almost all the terrorist killers in France in the past few years (including Mohamed Bouhlel, the atheist petty criminal who was the culprit of the lorry massacre in Nice itself in July 2016) have been marijuana users.

I’ll happily give blood, but not in a muzzle

Last Monday I tried to give a pint of blood, something I do reasonably regularly – though not as often as I should. I was prevented from even entering the Donor Centre by a senior functionary of the English Blood Service, because I declined to wear a muzzle.

Oh, how selfish and pompous of me, to deprive someone in need of my blood, because I wouldn’t don a strip of cloth for a few minutes! Well, I don’t agree.

And if you do you can easily nip along to your nearest blood bank and replace the pint I didn’t give with one of your own. But will you really? 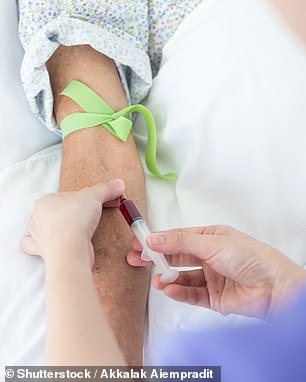 Last Monday I tried to give a pint of blood, something I do reasonably regularly – though not as often as I should [File photo]

There’s no good evidence that these muzzles stop transmission of Covid. And I view them as a badge of submission to a series of stupid and damaging Government policies which I oppose and despise.

To don one of these things would be compelled speech, like being forced to wear a badge saying ‘I LOVE BORIS’, when I don’t.

But it’s worse than that. The enforced wearing of face-nappies by donors – which even the Government does not require – may actually be making the process less safe in England.

The blood services of all three of the other nations in the UK ask donors to remove masks during donation.

The services in Scotland and Northern Ireland confirmed to me that they take the same view. But the English service, the NHSBT, refuses to discuss it, taking a Dalek-like view that you will jolly well obey. I think they have forgotten that donors are volunteers.