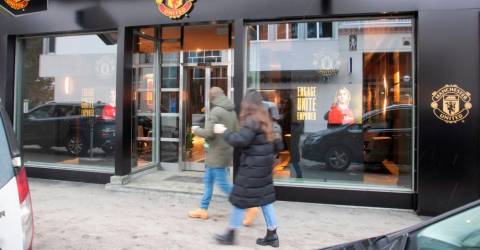 DAVOS: Manchester United great Peter Schmeichel on Tuesday defended the club’s decision to set up a luxury lounge at the World Economic Forum in Davos this week which has sparked speculation that it is being used to market the team to potential buyers.

Positioned near global software companies, consultancies and banks, the club has created a lounge on the main high street of Davos, a luxury Swiss ski resort teeming with billionaires and CEOs this week during the annual Forum.

“If you look at what we say about ourselves — we say that we are one of the biggest sporting brands in the world — then I think you have to back it up by having a presence in places like this,“ Schmeichel, who is acting as an ambassador, told AFP.

“Of course, our football club is not just about the commercial side, making money,“ added the Danish legend, who won five Premier League titles and the Champions League with United.

Ellie Norman, a club spokeswoman, said the lounge — with a bar, multiple seating areas and screens showing club heroes — served as a place to meet with existing and future corporate partners and sponsors.

“We are in a strategic review. That’s a process that’s ongoing,“ she told AFP, referring to the club-owning Glazer family’s announcement in November that they were considering “all strategic alternatives” for the club including a sale.

“We don’t know the outcome of that, but that is not connected to why we’re back in Davos,“ she adding, stating that Manchester United had been a partner of the World Economic Forum since 2019.

Schmeichel said his personal preference would be for fans to buy the club if the US-based Glazers put it up for sale, but he conceded that this was an unlikely outcome.

“I know there’s a lot of fans who are wanting a change in ownership,“ he said.

“For me… would it make a difference to change the ownership? I think the only difference would be if it was owned by the fans, but I think that’s probably impossible. It’s too big.”

The Glazers have been unpopular with supporters ever since a £790 million ($934 million) leveraged takeover in 2005 burdened the club with huge debts.

Schmeichel said he was focusing on events on the pitch and was delighted in the club’s turnaround in fortunes under manager Erik ten Hag.

“We’ve had to change managers far too many times since Alex (Ferguson) left and it’s been very unstable,“ said the 59-year-old Dane.

Ten Hag “looks to be a very, very, very capable person and able to do what needs to be done.” – AFP