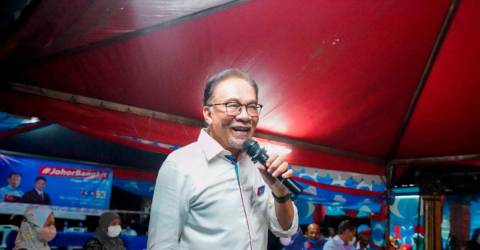 Anwar, who is also PKR President said the matter was not discussed in the PH Presidential Council.

“PH did not discuss the matter (collaboration with Muda), the matter does not arise, there is no problem with collaboration and discussions, even among the opposition. But the question about (Muda) being part of PH has not been discussed by the PH Presidential Council,” he said.

Anwar said this to reporters when met at the 2022 Climate Change Symposium organised by the Opposition Leader’s office with the cooperation from the office of the Dewan Rakyat Speaker and the Parliament at the Parliament building, yesterday.

He said this when met by Bernama outside the hall which is the location of Muda’s closed-door workshop held today in conjunction with Muda’s Election Conference taking place today.

According to Syed Saddiq, Muda will appoint and announce the party’s Election Director and Election Committee for GE15 at today’s conference.

He said Muda hoped to have more women at the forefront of the candidate selection process to get the election machinery moving. – Bernama