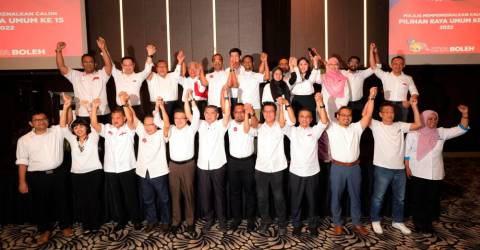 JOHOR BAHRU: Pakatan Harapan (PH) is aiming to win 22 of the 26 parliamentary seats contested in Johor in the 15th general election (GE15).

Johor PH chairman Datuk Seri Salahuddin Ayub said the coalition was confident that the target could be achieved based on its momentum and excellent performance in GE14 where PH managed to capture 18 seats from Barisan Nasional’s (BN) stronghold areas.

He is also confident that PH can wrest Pengerang, Pontian, Tenggara and Sembrong.

“We have prepared the best line-up of candidates), all of whom have been screened for GE15, not just to defend the 18 seats won in GE14 but also (other) seats we believe that we have the potential (to win).

“Insya-Allah, Johor will be a state that will contribute to PH’s victory to establish a new government at the federal level,“ he told reporters at a media conference to introduce Johor PH candidates at a hotel here today.

On the Tanjung Piai seat, which has been given to the Malaysian United Democratic Alliance, as well as the issue of Pontian being contested by DAP instead of PKR, Salahuddin, who will be defending the Pulai parliamentary seat, and Johor PH deputy chairman Syed Ibrahim Syed Noh both said the matter has been resolved.

“There is no more dispute. That is the discipline shown in PH, we can discuss.

“When it is decided, we comply even if there is dissatisfaction but that is how our discipline works. The important thing is that one enemy must be defeated,” said Salahuddin. – Bernama