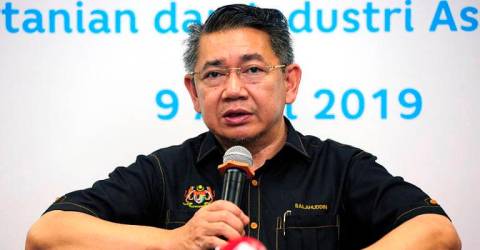 SEREMBAN: Pakatan Harapan (PH) will set up a committee to hold negotiations and evaluate the position of the Malaysian United Democratic Alliance (Muda) which intends to join the coalition in the near future.

PH vice-chairman Datuk Seri Salahuddin Ayub (gambar) said the negotiations were part of engagement steps with Muda, in addition to clarifying the parameters that should be communicated to parties that intend to join PH.

“Yesterday the chairman (Datuk Seri Anwar Ibrahim) made it clear that we will form a committee to engage with Muda.

“There are steps to follow…PH is open, we can accept all applications (to join PH), but some steps must be taken first,” he told reporters after attending the Parti Amanah Negara’s (Amanah) women wing Angkatan Wanita Amanah Negara (AWAN) convention here today.

Muda president Syed Saddiq Syed Abdul Rahman was previously reported to have said that the party agreed to join PH as one of the component parties in the coalition to face the 15th General Election (GE15) and was open to holding official discussions with the PH presidential council regarding the matter.

In the meantime, Salahuddin said 70 per cent of the 52 seats contested by Bersatu in the 14th General Election (GE14) had been negotiated between the PH coalition parties, and the process was expected to be completed before Sept 30.

Salahuddin, who is also Amanah deputy president, said the party will resolve the issue of candidates who will contest in GE15 by mid-October at the latest. Currently, 70 per cent have been decided, taking into account certain criteria including involvement in the party, commitment and qualifications.

“Regarding female candidates, I mentioned before that Amanah is targeting 40 to 45 seats for GE15, taking into account our strength; AWAN and Youth wing still have seats but the number has not been announced as we are still in the process of evaluating the candidates,” he said.

Meanwhile, AWAN chief Aiman ​​Athirah Sabu hopes that the seats for female candidates should be in strategic areas and have the potential to win, taking into account AWAN’s qualifications and experience.

Earlier, Aiman ​​Athirah in her speech urged the government to review the punishment for corruption offences with a stricter minimum sentence as a preventive measure.