It’s the only show in ANY town! Phantom of the Opera returns to the stage in South Korea four weeks after being shut down when cast member caught coronavirus

By Emma Powell Showbusiness Correspondent For The Daily Mail

As a masked figure who hides himself away from the world, the Phantom of the Opera was perhaps better equipped to deal with the pandemic than most.

So it’s little surprise that Andrew Lloyd Webber’s musical is now thought to be the only major show currently on stage anywhere on the planet.

A touring production of the show has reopened in Seoul, South Korea, after being forced to close for four weeks when a member of the cast was struck down with the virus.

‘This is a British show still going in these times. It’s the only show in town – any town!’

The Phantom has been able to return because South Korea has introduced a tracing app for people to prove they are corona-free and receive warnings about local virus cases.

The theatre impresario, who is in lockdown with his wife Madeleine in Hampshire, is ‘optimistic’ that such an app would allow Britain to follow suit and throw open the doors to the West End once restrictions are lifted. 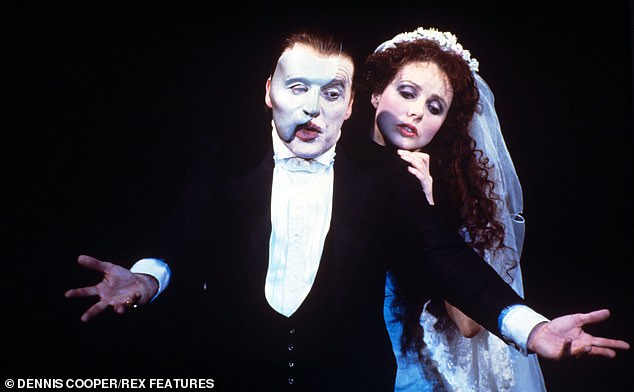 ‘Everyone is saying it’s doom and gloom in the theatres and it is, there’s no question about it.

‘The only word to say is it’s devastating and it’s very likely that the West End is going to be a very different place come next year. This is decimating everything.’

Speaking about the app, he added: ‘We’re looking at it very closely for our theatres. We’ve ordered already as many self-sanitising door handles as we can and are looking into all of the measures they are taking there because when we do get theatres back open again, the most important thing is the public’s safety and of course the cast’s safety.

‘That’s got to be paramount. If we get this app together, one of the absolute policies in my theatres will be if you haven’t got that you can’t buy a ticket.’

Lord Lloyd Webber was working on his upcoming show Cinderella when the outbreak struck and moved the first night back from September until October.

The Phantom of the Opera opened in London in 1986 with Michael Crawford and Sarah Brightman in the main roles. It has scooped multiple Olivier and Tony awards.