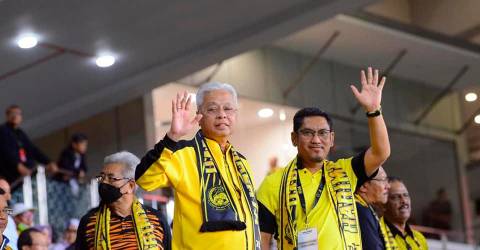 He arrived at the stadium at about 8.45 pm and was greeted by Youth and Sports Minister Datuk Seri Ahmad Faizal Azumu, Football Association of Malaysia (FAM) president Datuk Hamidin Mohd Amin and other top FAM officials.

About 50,000 people packed the stadium, which was a sea of Malaysian fans including Ultras Malaya who enlivened the atmosphere with loud cheering, singing and playing of drums.

Malaysia, ranked 154th in the world, can still qualify for the Asian Cup with just a draw against 188th ranked Bangladesh but a win would definitely see them through.

Malaysia last played in the Asian Cup as a co-host in 2007 but they have not qualified on merit for 42 years since the 1980 edition in Kuwait.

After two matches, Malaysia are second in Group E with three points while Bahrain have emerged group champions with nine points after completing their group fixtures.-Bernama