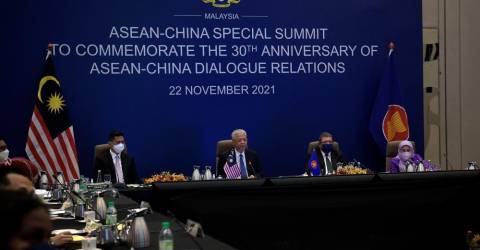 KUALA LUMPUR: Asean and China could work together on boosting multilateralism, especially in reforming the United Nations (UN) to ensure the international body remains effective and relevant amidst evolving global dynamics.

Malaysian Prime Minister Datuk Seri Ismail Sabri Yaakob in saying this stressed that a world order based on multilateralism is vital.

“Such an order would enable sustainable and peaceful co-existence of civilisations that is rules-based, open, inclusive and transparent,” he said.

He said this while speaking in his intervention note at the Asean-China Special Summit to Commemorate the 30th Anniversary of Asean-China Dialogue Relations held via video conference from here, Monday. The Special Summit was chaired by Brunei’s ruler, Sultan Hassanal Bolkiah as his country is the chair to this year’s Asean chairmanship. It was also attended by China’s President Xi Jinping.

“China-US bilateral relations are among the most consequential in the world. While differences remain, Malaysia welcomes recognition of the collective responsibilities that both countries have towards maintaining peace, development and social progress,” he said.

On climate change, Ismail Sabri said Malaysia aspired to achieve net-zero greenhouse gas emission by 2050 at the earliest and welcomed commitments made by China and other parties at the COP-26 (2021 UN Climate Change Conference) in Glasgow, Scotland recently.

He stressed upon the need to balance between addressing climate change and the importance of socio-economic development, through the UNFCCC (UN Framework Convention on Climate Change) and Paris Agreement.

“We applaud China’s call for developed countries to fulfil their obligations by providing finance, technology transfer and capacity building to developing countries in their efforts towards addressing climate change,” he said.

Meanwhile, Ismail Sabri also reiterated Malaysia’s firm position on the South China Sea issue, it has to be resolved peacefully and constructively in accordance with universally recognised principles of international law, including the United Nations Convention on the Law of the SEA (UNCLOS) 1982.

Malaysia calls on all countries to remain committed towards maintaining the South China Sea as a sea of peace, stability and trade, and to this end, all parties should exercise self-restraint and avoid actions that may be deemed provocative, which could further complicate the situation and escalate tensions in the area.