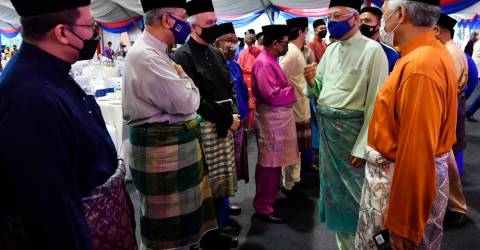 KUALA LUMPUR: Prime Minister Datuk Seri Ismail Yaakob has called on mosques, suraus and individuals to ‘interact’ with the Al-Quran for an hour starting 12 noon, tomorrow at their respective locations.

He said this was in conjunction with the organisation of the World #QuranHour (WQH) 2022 themed ‘The World Prostrates’ by selecting the 32nd verse which is Al-Sajdah as the main verse.

“WQH choses surah Al-Sajdah as the main verse which invites people to appreciate the true meaning of prostration with full confidence to Allah SWT who can remove the nature of ego or arrogance to succeed in this world and the hereafter.

“The surah is also a guide for the framework of the mind and the unification of the ummah through economic and educational aspects thus giving us strength in facing the test by prostrating to Allah SWT,“ he said in a special speech in conjunction with WQH through a video uploaded on WQH’s Facebook account yesterday.

The Prime Minister said even though the programme lasted for one hour, he hoped WQH would be able to raise the image of Islam and at the same time cultivate the culture of the Al-Quran in life in terms of reading, appreciation and practice.

“I hope this surah is not just read but practised in our lives. Hopefully the good efforts would bring the community closer to the Al-Quran as organised by the Warisan Ummah Ikhlas Foundation (WUIF) and the synergistic partners can be continued and blessed,“ he said.

World #QuranHour returns for the seventh year with the theme ‘The World Prostrates’ in an effort to strengthen the wave of the ‘Read, Understand and Practice Al-Quran’ movement among the community.-Bernama