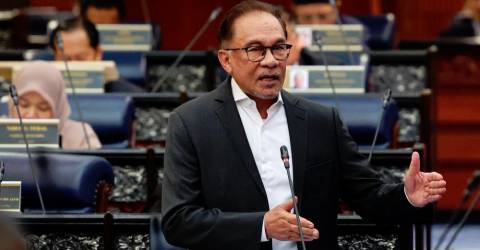 PUTRAJAYA: Prime Minister Datuk Seri Anwar Ibrahim (pix) today told his Cabinet members to take seriously and scrutinise all remarks made in the Auditor-General’s Report 2021 on the expenses, leakages, and matters of non-compliance with conditions and regulations involving their respective ministries.

In a press conference after chairing the Cabinet meeting here today, Anwar said the meeting had examined the report but decided not to disclose it to give space to the relevant agencies under the ministries to respond.

“For now, I want the Cabinet ministers to seriously look into these remarks so that they are not repeated because the Auditor General’s Report always contains recommendations, but the same mistakes are being repeated year after year,” he said.

Anwar said the National Audit Department will announce the report at the time they deemed fit and will table it in the next Parliament session.

He said such a report is important as repeated mistakes had been detected, such as a lack of monitoring, allowing leakages, and handing over matters to companies that do not play by the rules.

Anwar said the audit report refers to some specific instances and problems and it is not necessarily corrupt because that was not within their field of competence but to identify the problems.

He said it was the ministries’ task to look at the audit report and call for agencies concerned for explanations and determined if further action or report needed to be lodged.

“Every single ministry must take it as part of their responsibility to look at the criticism of their ministry, although these happened in the past in order to remind our public servants that it is their duty to keep their integrity at work and competency intact,” he said.

Meanwhile, the Prime Minister said the civil servants can reprimand a minister or top government official as long as it is done using the right channel or in a face-to-face meeting, not through some statements to the media.

Anwar also reminded Chief Secretary to the Government Tan Sri Mohd Zuki Ali to advise him if any of his instructions went against the rules.

“That is teamwork! And he has to accept the fact that we too must reprimand them for their wrongdoings,” he said. – Bernama