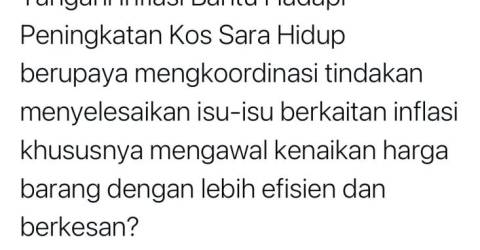 RECENTLY, the formation of the Jihad Task Force to wage a ‘holy war’ against inflation in the country became the talk of the town.

However, the initiative did not go well with the public for various reasons.

In response to the situation, the Prime Minister’s office’s Twitter page started a poll asking people if they support the notion of the committee has been published, but it was quickly taken down due to the negative results received.

Meanwhile, DAP social media bureau chief Syahredzan Johan, managed to get a screenshot of the poll and he later take it to Twitter to showcase it and asked, “Why did you delete it?”

The poll read, “Do you agree that the establishment of a special jihad team to deal with inflation to help deal with the rising costs of living will be able to coordinate actions to resolve inflation-related issues, especially in controlling the increase in prices of goods more efficiently and effectively?”

The screenshot of the poll showed 93% of the people said ‘no’ and 4% said they are not sure about this.