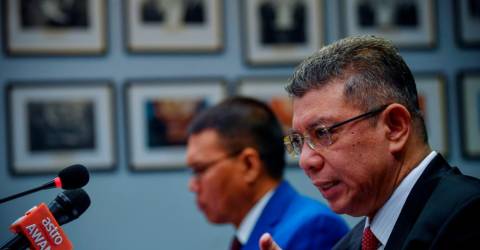 KUANTAN: After a week of campaigning, Perikatan Nasional (PN) believes it can add two more parliamentary and eight state seats in Pahang in the 15th general election (GE15).

Pahang PN chairman Datuk Seri Saifuddin Abdullah (pix) said that based on developments in the ‘first half’ of the campaign, the support shown by the people of Pahang to PN has been quite encouraging.

“I am confident that we can at least take one parliamentary seat each from Barisan Nasional (BN) and Pakatan Harapan (PH).

“As for state seats, previously we had eight seats and that number can be doubled to 16,“ he told a press conference at the Indera Mahkota parliamentary office here today.

In GE14, Saifuddin won the Indera Mahkota parliamentary seat on a PKR ticket but joined Bersatu in 2020.

BN has 25 state seats while PH has nine. – Bernama