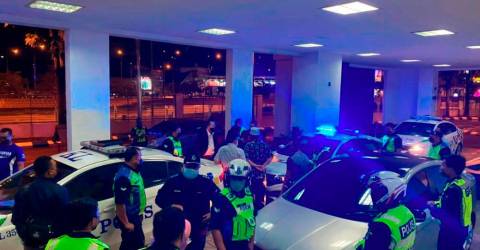 GEORGE TOWN: The Penang police have approved 69 permits for political talks for the 15th general election (GE15) in the state so far.

The Penang Contingent Police Headquarters GE15 media spokesman said that from the total, 34 permits were approved for Perikatan Nasional (PN), Pakatan Harapan (19), Barisan Nasional (15), Pejuang (1), but there were no applications from independent candidates so far.

“Based on checks and monitoring conducted by the police, there have been no talks without permits so far,” he told Bernama today, adding that they have yet to receive any reports of untoward incidents relating to the election so far.

The spokesman also advised all parties and their supporters to comply with regulations and to obey the law and not to resort to provoking their rivals throughout the campaign period.

“If any incident occurs, any party can refer to the police for further action,” he said.

Meanwhile, Penang PKR information chief Amir Ghazali claimed a bunting depicting their Permatang candidate Nurul Izzah Anwar had been damaged and they would be lodging a police report about the matter.

“It’s now 2022, I think it’s time for all of us to campaign properly and not resort to such tactics as to destroy rivals’ buntings or flags,” he added.-Bernama