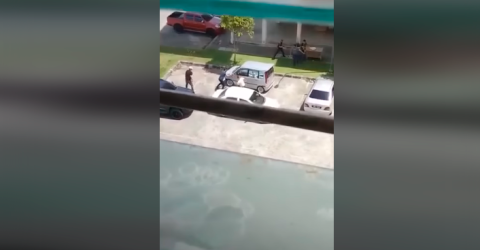 THE police have confirmed that a 30-second video that went viral today involved an operation to detain a vehicle driven by an alleged drug trafficker, Bernama reports.

“The suspect acted aggressively and almost rammed a police personnel, forcing them to shot the vehicle’s tyre to stop the vehicle.

“While other police personnel tried to to break the front windscreen of the vehicle with their walkie talkies, damaging it,” he said in a statement tonight.

He said the suspect escaped using the same vehicle but it was found by the roadside around 2 kilometres from the incident location.

Abdul Fuad asked those with information about the case to contact investigating officer ASP R Jas Dewd at 013-3598455.

The viral video showed the Perodua Kenari managing to escape by ramming the barrier of the parking area, evading capture by a four-wheel drive vehicle and a sedan car.

After escaping, five men, who are understood to be the police, got into the four-wheel drive vehicle and sedan before chasing after the suspect.