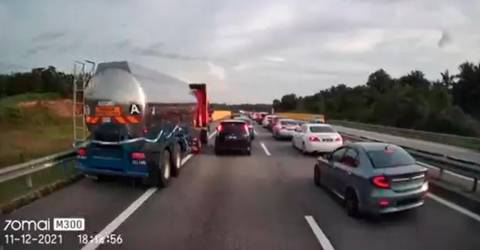 BY law, emergency lanes are meant for emergencies. However, some are still oblivious to such rules and continue to abuse them.

Recently, a tanker truck driver was caught navigating his way through the emergency lane along the Seremban-Port Dickson Highway, in a 16-second video that went viral

The viral dashcam footage showed that vehicles were trapped in heavy traffic before the tanker truck driver performed the illegal action.

According to Port Dickson District Police Chief Superintendent Aidi Sham Mohamed, the incident is believed to have taken place between 2pm to 4pm on Dec 11 around KM27-KM28 of the Seremban-Port Dickson Highway.

The tanker truck, with the number place CEL 5916, has been identified as being registered under a logistics company in Bukit Raja, Shah Alam.

“We request for the driver or the owner of the vehicle to present himself at the Port Dickson Traffic police station for further investigation,” Aidi said in a statement.

Meanwhile, police urge road users to practice proper road safety, and to obey traffic rules to avoid causing inconvenience to other drivers. Aidi further stated that the police will not go easy on any road users who abuse emergency lanes.

The case is being investigated under Section 279 of the Penal Code and Rule 53(1) of the Road Traffic Rules 1959.