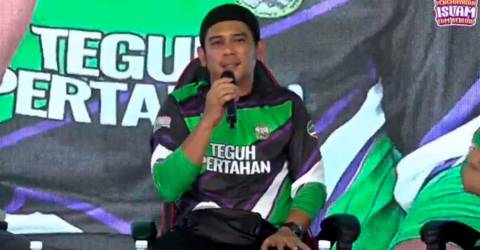 PDRM secretary Datuk Noorsiah Mohd Saaduddin said in a statement today that the police were still waiting for a report from the Communications and Multimedia Commission (MCMC) to complete their investigation papers before referring them to the Attorney-General’s Chambers.

Media outlets had previously reported that the actor had allegedly made racial and violent remarks at a political event in Kemaman, Terengganu on Nov 4 that were recorded in a video that went viral.

The 43-year-old actor subsequently apologised on Instagram yesterday after a public backlash.

He said checks revealed that an investigation paper had been opened in Alor Setar, Kedah regarding a viral video featuring Mohd Shahiful and it was being investigated under Section 4A(1) of the Election Offences Act 1954, Section 504 of the Penal Code, and Section 233 of the Communications and Multimedia Act 1998.

“Another investigation paper has been opened following a police report in Chukai, Kemaman, Terengganu involving a viral video featuring Zul Huzaimy that is being investigated under Section 506, 505(c) of the Penal Code and Section 233 of the Communications and Multimedia Act 1998,” he said in a statement today.

Mohd Shahiful had been recorded during a campaign talk stating that whoever voted for Barisan Nasional (BN) and Pakatan Harapan (PH) would end up in hell.

He received criticism from various parties after the video went viral and Mohd Shahiful subsequently apologised yesterday and retracted his statement. He has also applied for leave from his party positions till an unspecified time in the future. – Bernama