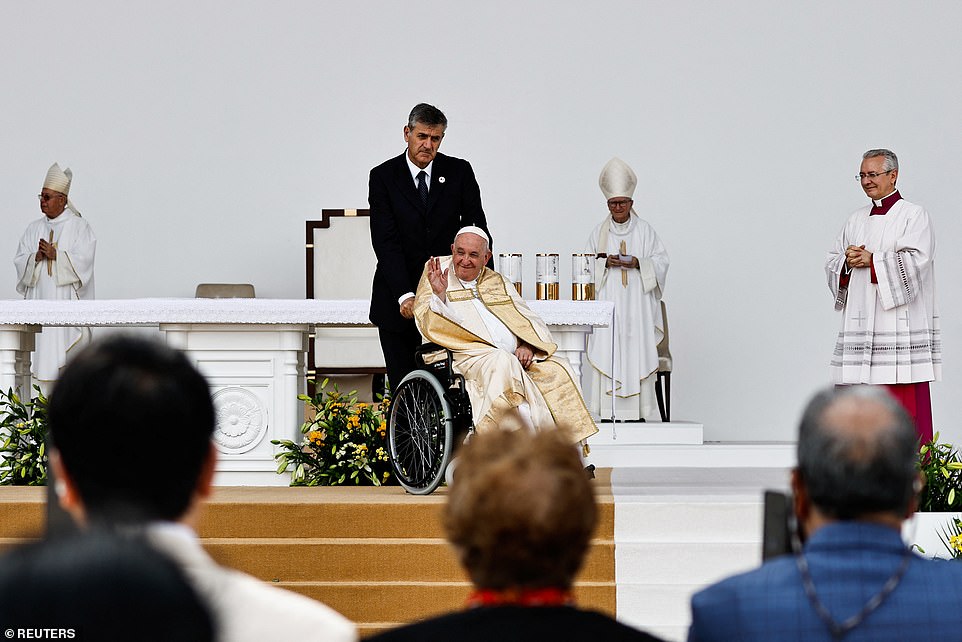 Some 30,000 flag-waving worshippers gathered for an open-air mass held by Pope Francis in the mainly Muslim country of Bahrain on Saturday, the highlight of his outreach mission to the Gulf.

Many people in the congregation had tears in their eyes as they waited to see the 85-year-old at Bahrain National Stadium.

Pope Francis, who uses a wheelchair and walking stick due to knee problems and his elderly age, smiled and waved to the crowds from his open-sided popemobile where he was seated, flanked by more than a dozen suited security guards and attendants.

Pope Francis, 85, waves as he presides over a holy mass at Bahrain National Stadium in Riffa, Bahrain, on Saturday, November 5, 2022 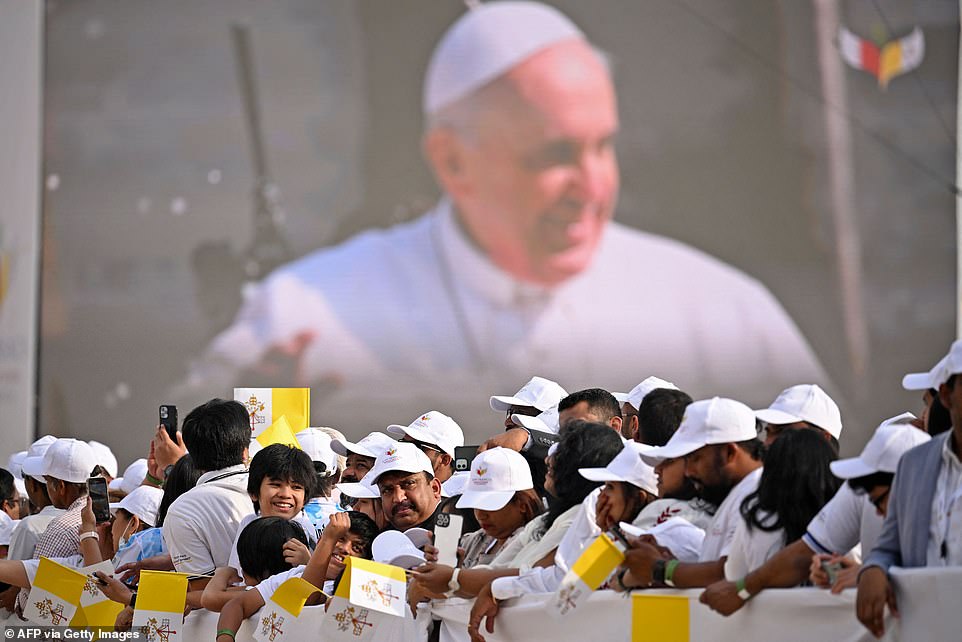 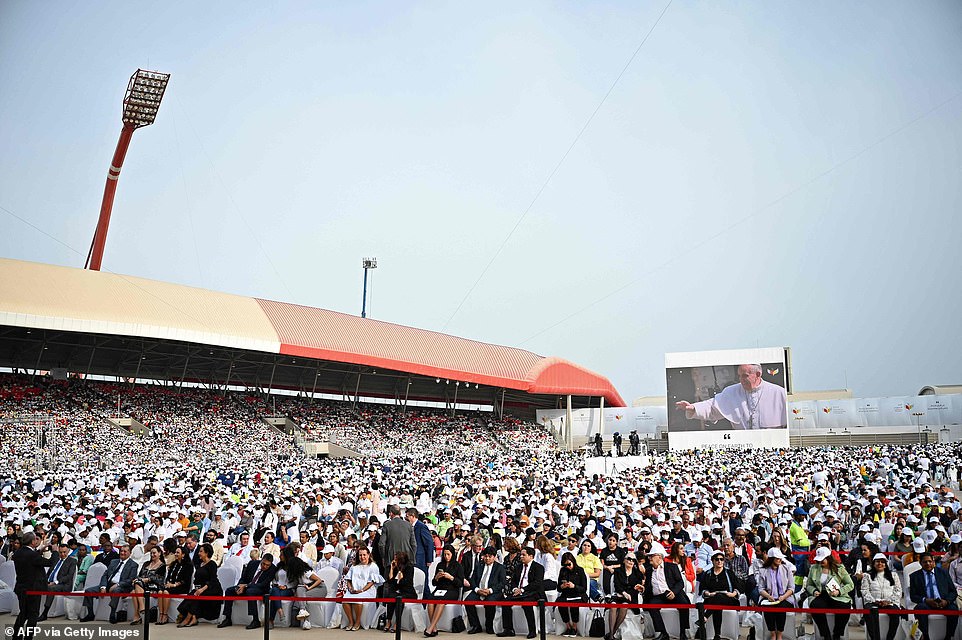 Much of the 30,000-strong congregation had tears in their eyes as they waited to see the pope 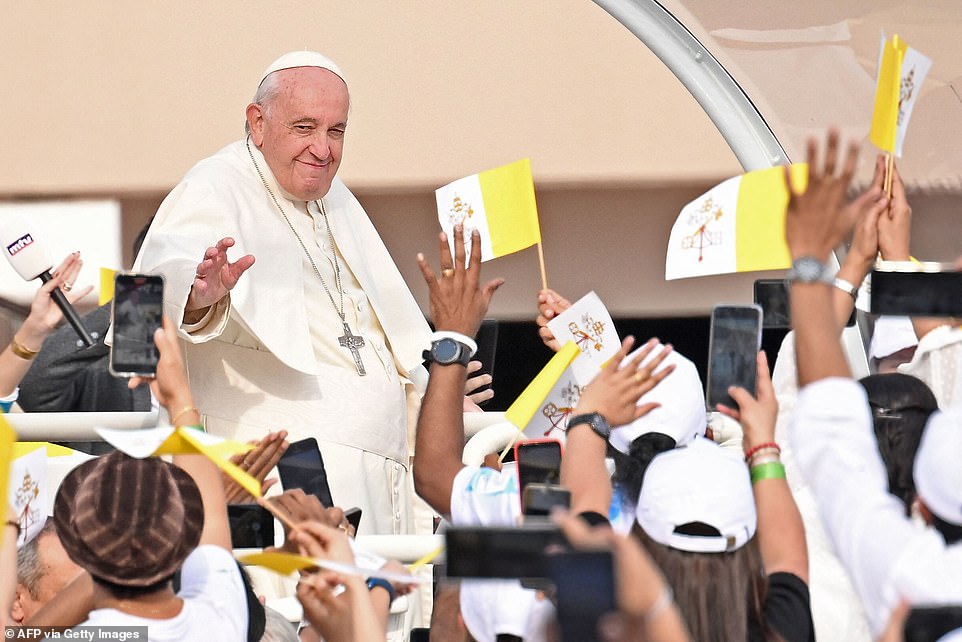 As a 100-strong, multinational choir sang in multiple languages, the Argentine stood to kiss children lifted up to greet him in the specially adapted vehicle, which drove slowly towards a white stage backdropped by a giant gold cross.

‘This very land is a living image of coexistence in diversity and indeed an image of our world, increasingly marked by the constant migration of peoples and by a pluralism of ideas, customs and traditions,’ he said in an address.

The pope, who has made outreach to Islam a pillar of his papacy, is on his second visit to the resource-rich Gulf, the cradle of Islam.

During his 2019 trip to the United Arab Emirates he led a mass for 170,000 people and signed a Christian-Muslim manifesto for peace.

He has spent much of his four-day Bahrain trip meeting top officials and religious figures, but for Catholics in the tiny island nation, including many migrant workers, Saturday’s mass was the high point. 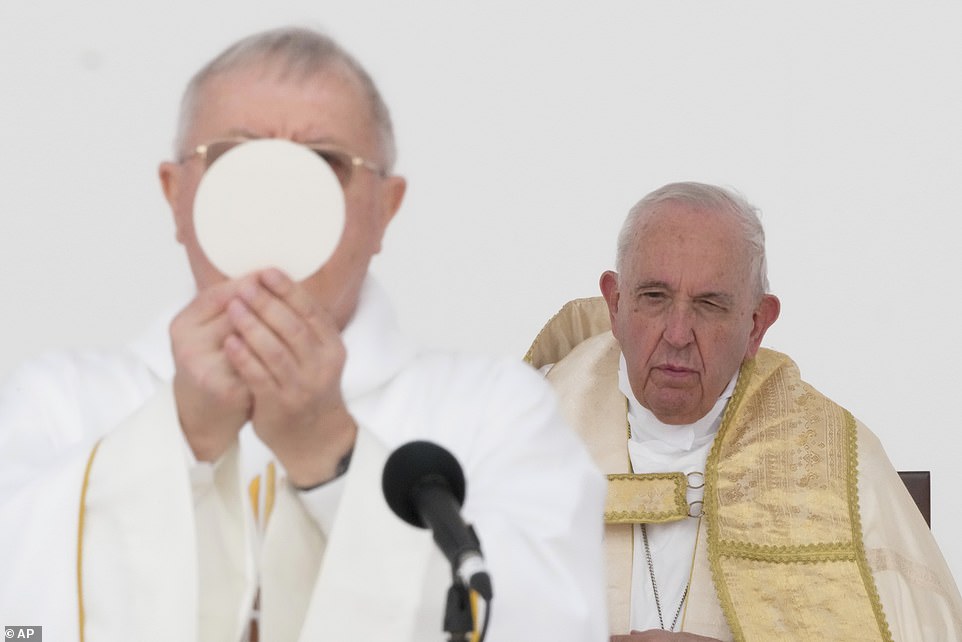 Pope Francis presided over the mass. This was part of his visit to the Gulf to participate in a government-sponsored conference on East-West dialogue and to minister to Bahrain’s tiny Catholic community 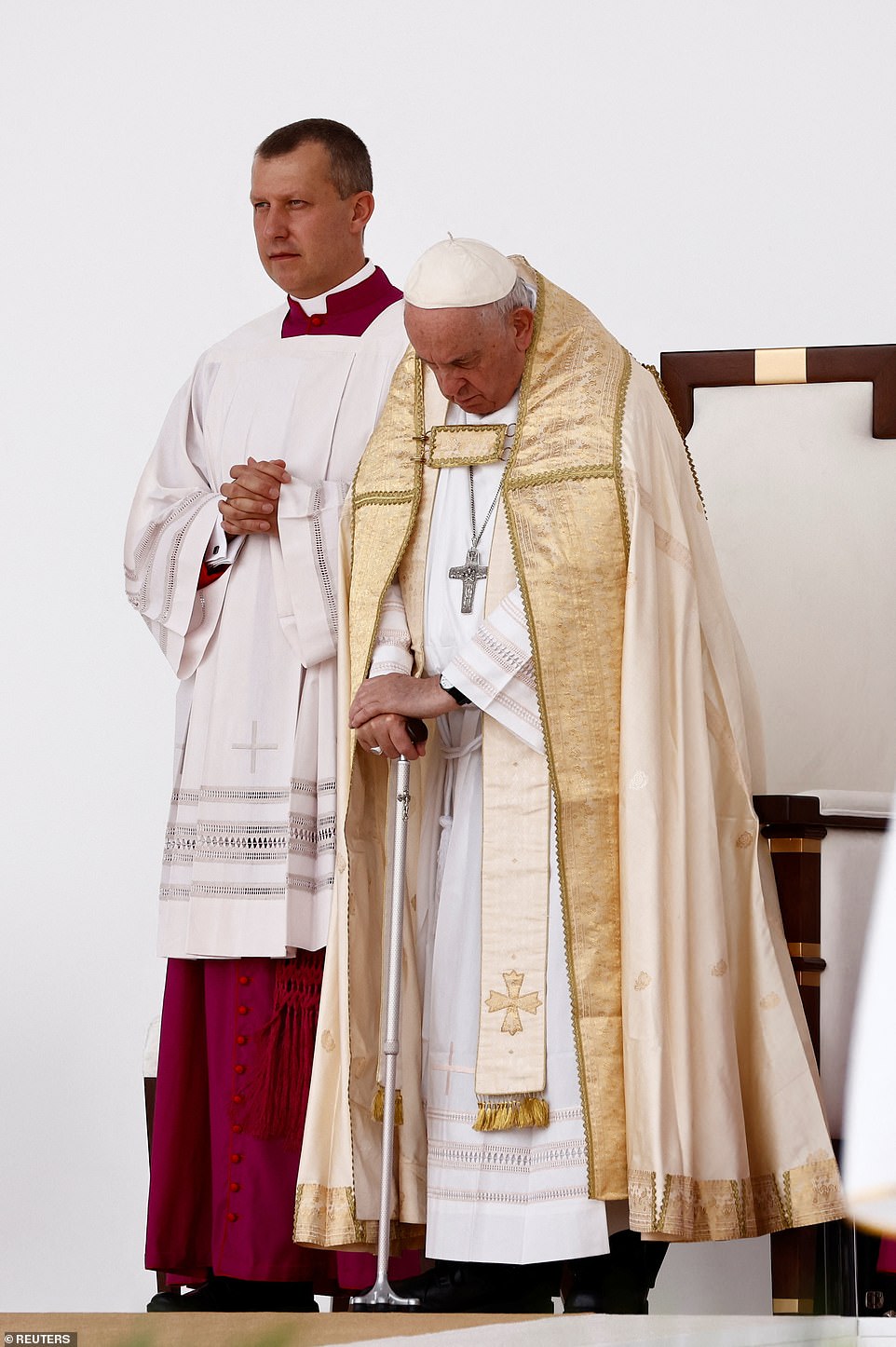 Pope Francis presides over a holy mass at Bahrain National Stadium during his apostolic journey, in Riffa, Bahrain on Saturday 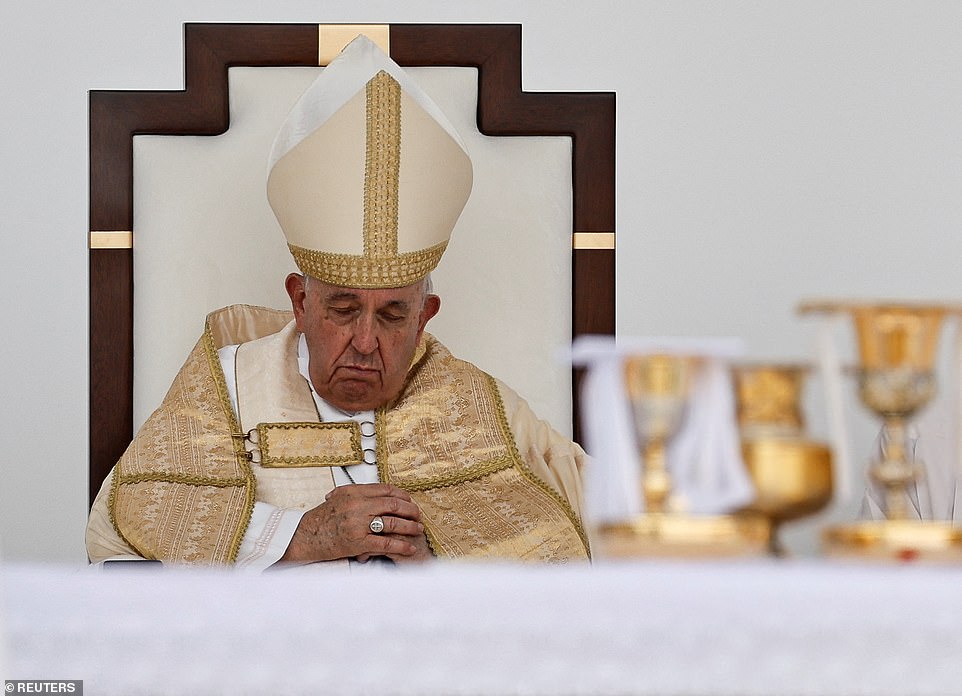 The pope has made outreach to Islam a pillar of his papacy. Bahrain has a tiny Catholic community.

‘We are so excited. We all call him ‘Papa’. More than anything, he represents peace in the world. This is what we need now.’

Margerite Heida, 63, also a Bahrain resident, said: ‘Hosting Pope Francis is the best feeling. This is the greatest event of the year.’

Heida was waiting for her second look at the pontiff.

‘I saw him yesterday in the church’, she said. ‘I consider myself lucky to be able to see him. I was also able to hold his hand yesterday and got his blessings.’

Many worshippers came to catch a glimpse of the pope from around the Gulf region, which has about two million Catholics, mainly foreign workers from South Asia and the Philippines. 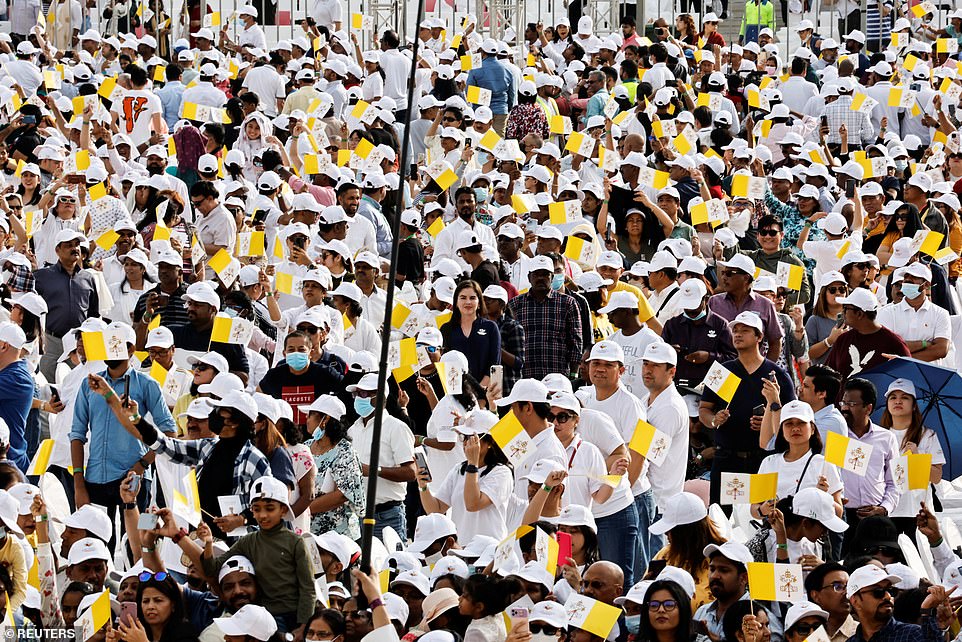 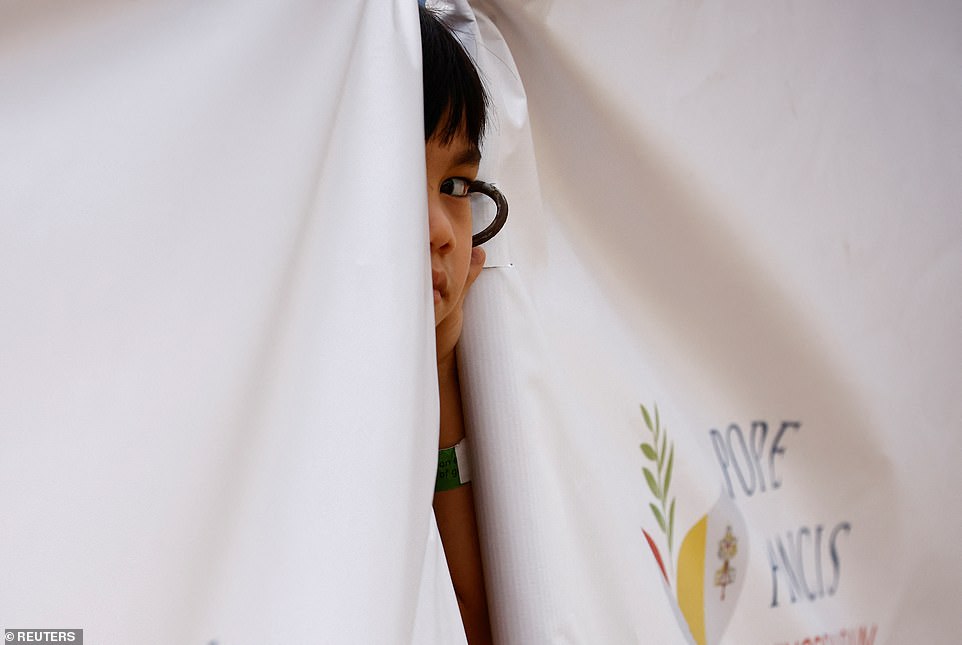 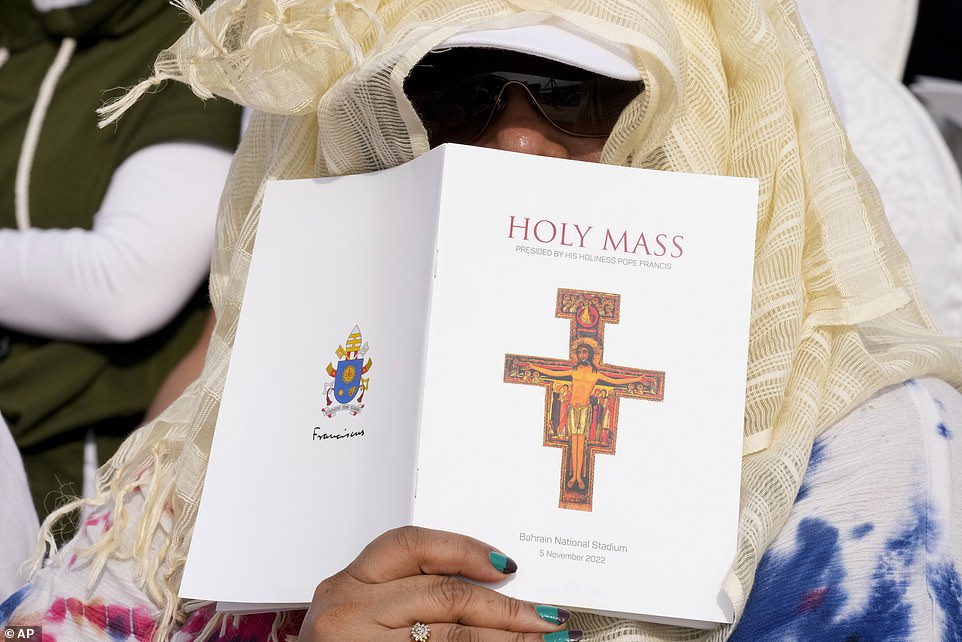 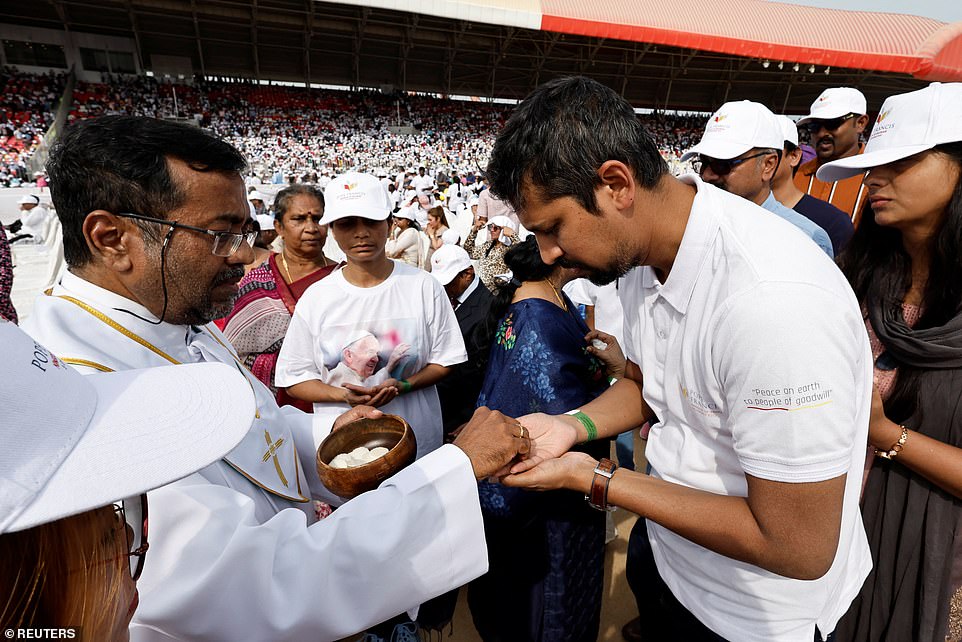 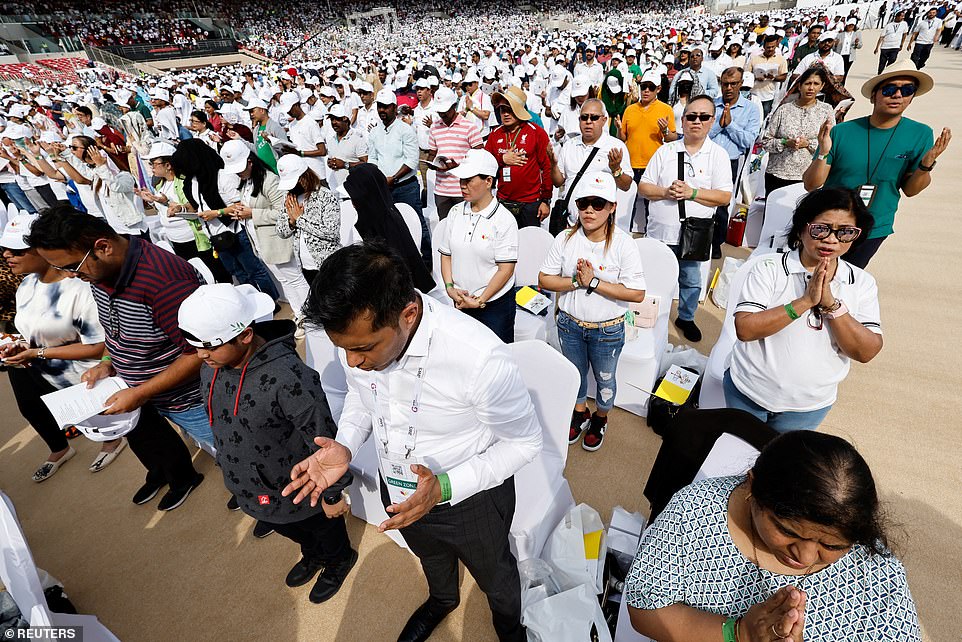 The pope, who has made outreach to Islam a pillar of his papacy, is on his second visit to the resource-rich Gulf, the cradle of Islam

Bahrain, like the United Arab Emirates, is considered a relatively tolerant Arab nation.

Still, NGOs continue to cite discrimination, repression and harassment in Bahrain by the Sunni elite against Shiites, crackdowns on opposition figures and activists, and other abuses.

A government spokesperson said Tuesday in a statement that Bahrain ‘does not tolerate discrimination’ and ‘prides itself on its values of tolerance’.

The statement said that ‘no individual’ is prosecuted ‘because of their religious or political beliefs’, but pointed to ‘a duty to investigate’ people who ‘incite, promote or glorify violence or hatred’.

Everyone at the stadium received a plastic bag containing a white baseball hat, a paper Vatican flag, a bottle of water, a booklet with details of the mass and some biscuits.

Pope Francis’s 39th international visit is largely aimed at building ties with Muslim officials. On Friday he met the grand imam of Egypt’s Al-Azhar mosque, one of the leading authorities of Sunni Islam, and members of the Muslim Council of Elders. 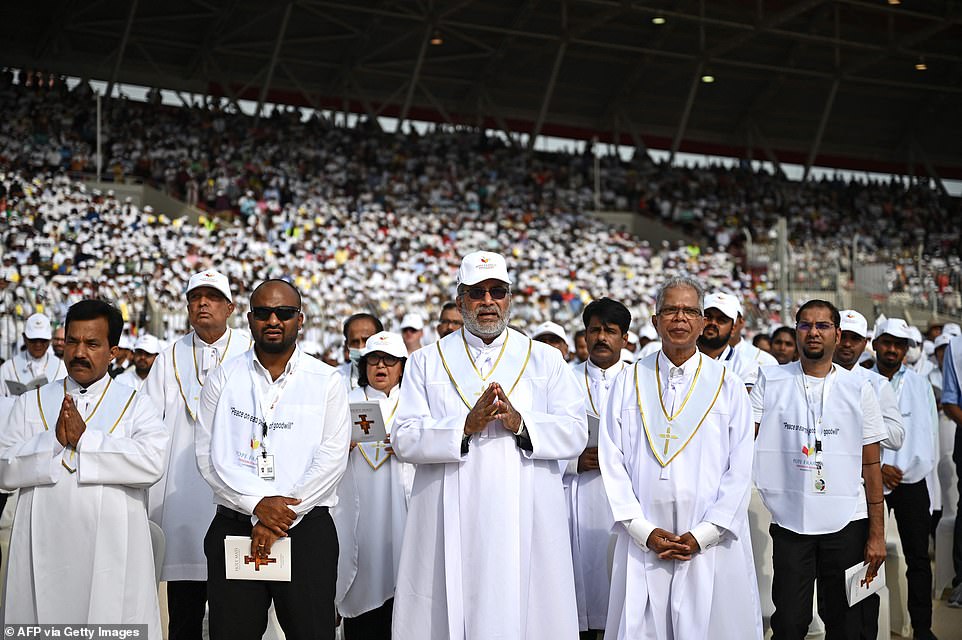 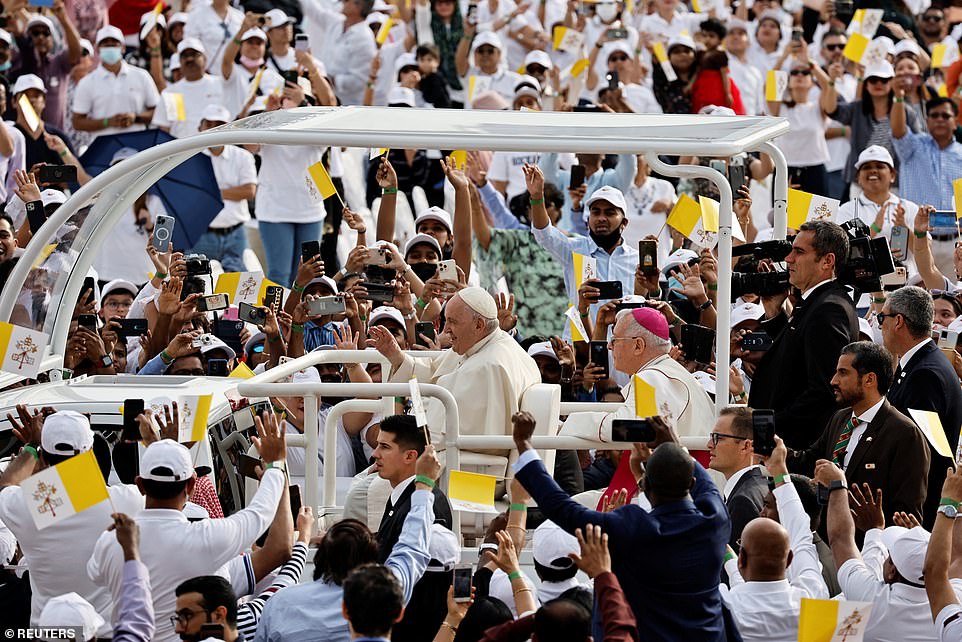 After the mass, the pope greets worshipers on the open-sided popemobile. Later on Saturday, he will meet children at the Sacred Heart School in Bahrain

He also attended a service at Our Lady of Arabia Cathedral, the biggest in the Arabian peninsula that seats more than 2,000. Hundreds of migrant workers were among the congregation welcoming him.

Later on Saturday, Francis will meet children at the Sacred Heart School.

On Sunday, he is to attend a prayer meeting at the 83-year-old Sacred Heart Church – the oldest in the region – before flying back to Rome.