Caught with his pants down! Porch pirate suffers comic wardrobe malfunction during bungling theft of a package

A hapless thief revealed rather too much when security cameras filmed his pants falling down as he stole an Amazon package from a home in Colorado Springs.

The footage, which was filmed yesterday, shows the porch pirate pull up outside the house on a motorbike before running over to the package and picking it up.

As he runs back to the bike, items spills out of his backpack onto the driveway.

Then as he rushes to retrieve them his pants fall down around his knees and threaten to  k up all the items he dropped. 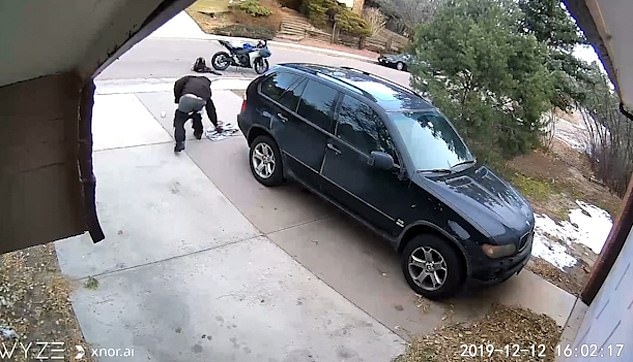 The thief stopped off on his motorbike and ran off with the package, almost losing his pants 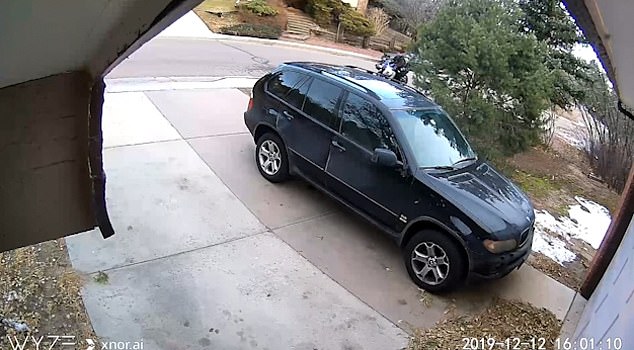 Eventually, the bungling thief packs the items back into his bag and makes off with the package.

Paul, the homeowner, told Newsflare: ‘He stole some clothes from Amazon and a gift package with a birthday gift for me and a Xmas gift for my son from my parents.

‘Initially, I was pretty angry, after watching the video a few times I almost feel sad for the guy, his life is clearly not going very well for him. That said, this kind of behavior is intolerable, he needs to be caught and dealt with by the authorities.

‘This is becoming more and more common everywhere at this point.

‘I have filed a police report. I don’t expect them to be able to do anything about it though. I will show the video to the mail carrier and the UPS driver in our area to keep an eye out for this guy.’ 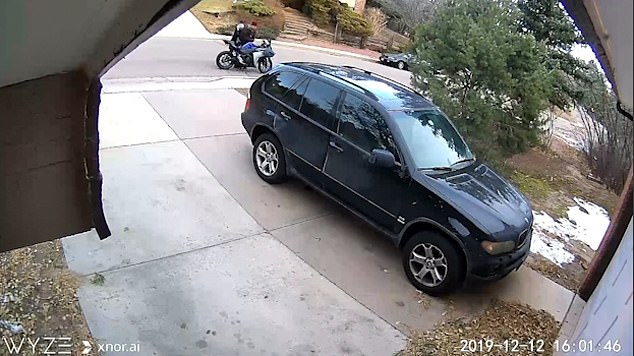 Paul, the home owner said: ‘This kind of behaviour is intolerable, he needs to be caught and dealt with by the authorities’