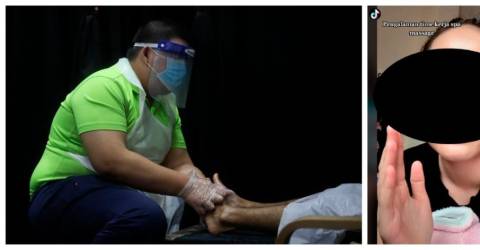 RECENTLY, a female masseuse has taken to TikTok to share how a male customer had repeatedly requested her to ‘massage’ his genitals and offered her an extra RM50.

A TikTok user explained that she was performing an aroma body massage on the male customer, requiring him to wear only his underwear as oil will be applied to his body.

However, midway through the session, the customer suddenly asked the user if she could ‘massage’ his genitals.

The masseuse refuses his request.

“However, he kept begging me to do it and even offered me an extra RM50 as additional fee,” she said, adding that he continued pleading until she lost her cool.

The masseuse then asked the customer, “Do you eat pork?”, to which he answered, “How can I eat pork? It’s haram (forbidden)!”

The masseuse questioned him, “How can eating pork is haram but not massaging your genitals?”

The customer went silent for a moment but continued persuading her to do so.

Meanwhile, she also pointed out in her other videos uploaded in TikTok that some netizens accused her of making up the story to attract viewers online.