California‘s Port of Oakland has resumed operations as truckers protesting a looming labor law continue to strike for a second week.

All marine terminals were operating normally on Monday after hundreds of truck drivers had blocked road access to the port, preventing ships from unloading at the major shipping hub and causing further disruption to the strained supply chain.

Cargo is moving in and out of the port, officials confirmed to DailyMail.com, but noted the multiple-day standstill caused a significant backlog.

Shocking photos captured over the weekend showed rows of stacked shipping containers with nowhere to go and an armada of fully loaded freighters queued up, unable to unload their cargo.

Officials say it will take time to recover from the shutdown fully, but the port is working to address the backlog and hopes to establish a plan for moving forward later this week.

Meantime, some truckers returned to the port Monday to protest Assembly Bill 5 – a 2019 law requiring certain industries to classify independent contractors as regular benefitted employees – but have confined their demonstration to the designated free speech zone.

California’s Port of Oakland has resumed operations as truckers protesting a looming labor law continue to strike for a second week. Shocking photos captured Saturday showed half a dozen fully-loaded freights waiting outside the port 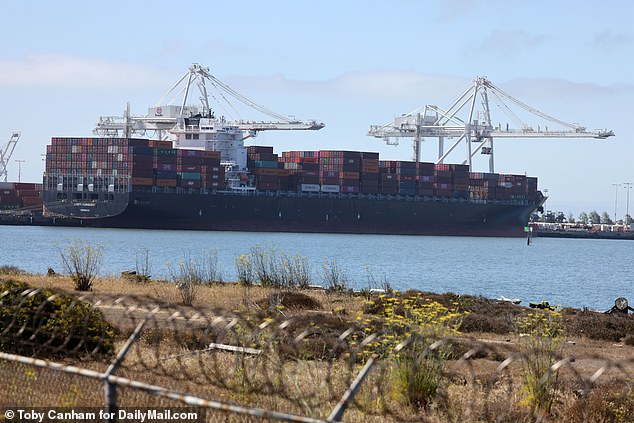 All marine terminals were operating normally on Monday, officials confirmed to DailyMail.com. Cargo laden freight boats waiting to unload at the Port of Oakland are pictured Saturday 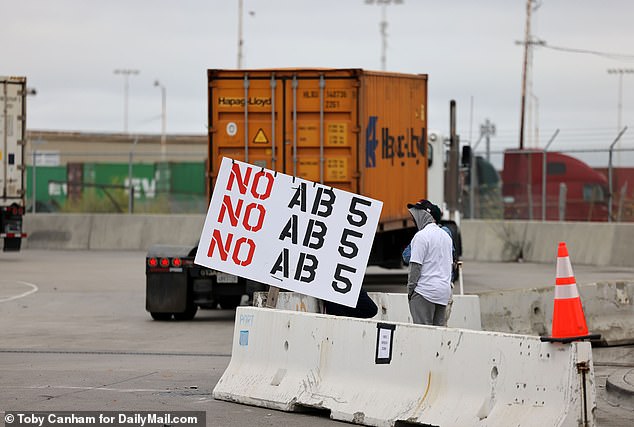 Independent truck drivers have been blocking road access to the port since last week, preventing ships from unloading at the major shipping hub. Protesters are pictured Monday

‘The Port of Oakland has resumed full operations,’ said Port Executive Director Director Danny Wan told DailyMail.com in a statement Monday. ‘We appreciate the independent truck drivers’ use of the designated Free Speech Zones and we thank local law enforcement for their continued assistance.’

The port claims that although some demonstrators returned on Monday, they did set up their picket in the delegated area.

Law enforcement officials are continuing to monitor the port and implement measures to keep traffic flowing.

Wan added: ‘The truckers have been heard and we now urge them to voice their grievances with lawmakers, not the Port of Oakland.’

A group of truckers who spoke to DailyMail.com on Monday said most independent operators had opted to stay home after the port authority threatened them with arrest last week after blockades shutdown the port.

The truckers assisting with clearing the backlogged cargo are mostly ‘company drivers,’ the protesters alleged.

Monday’s demonstrators said the truckers should be standing together in their fight against Assembly Bill 5 (AB5). They claimed it was unfair that drivers from other states can drop and pick up loads in California but are not affected by the law.

They were also frustrated with California Gov. Gavin Newsom’s response to the legislation, claiming he has used the AB5 to get unions inside the port.

Police confirmed protesters who interfere with port operations will be arrested. 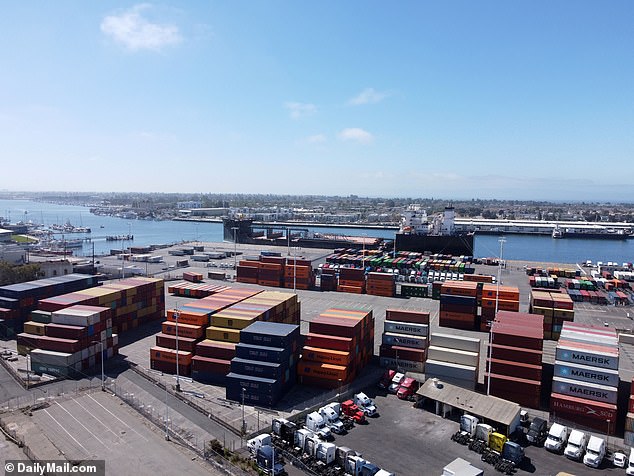 The protests began two weeks ago, when hundreds of independent big-rig truckers picketed gates and blocked other drivers from hauling cargo in and out of terminals at the Port of Oakland. Blocked cargo is pictured on Saturday 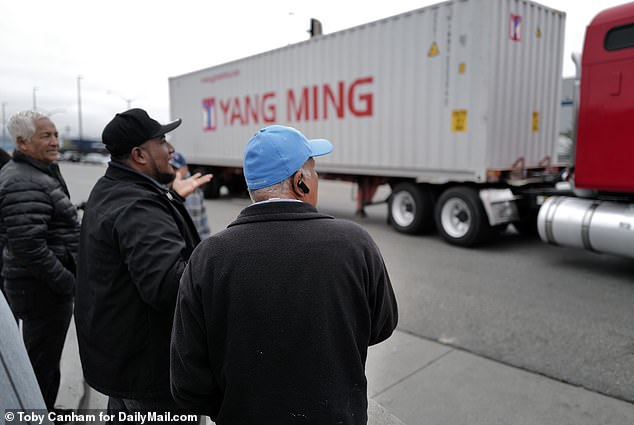 Officials say it will take time to fully recover from the shutdown, but the port is working to address the backlog and hopes to establish a plan this week. Protesters are pictured Monday 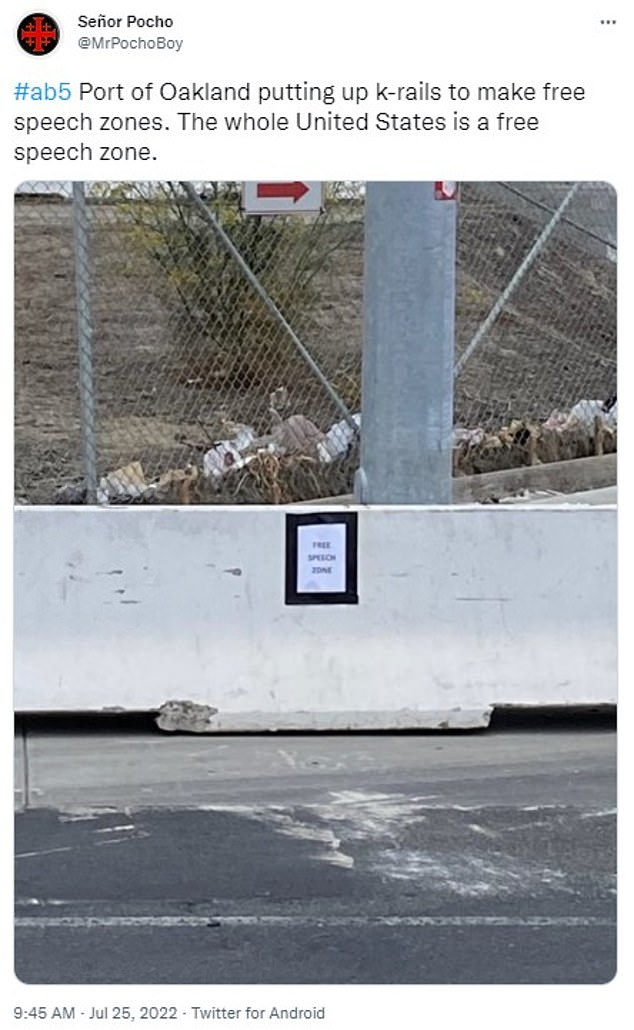 Port officials say some truckers returned on Monday to continue protesting Assembly Bill 5, but have confined their demonstration to the designated free speech zone (pictured)

The protests began two weeks ago, when hundreds of independent big-rig truckers picketed gates and blocked other drivers from hauling cargo in and out of terminals at the Port of Oakland.

Demonstrators took a break over the weekend that coincided with the port’s lessened weekend activity. The truckers previously said the protest would continue ‘indefinitely,’ despite port officials having told them they had until Monday to end their blockade.

The demonstrators have been in regular talks with port authorities and are hoping to get the attention of legislators and Newsom.

Truckers against AB5 argue the law has ruined their autonomy and upended the way they do business. They also say the law will require them to spend thousands of dollars on insurance and equipment rentals like chassis to remain independent.

A federal appeals court ruled last year that AB5 applies to some 70,000 truck drivers who can be classified as employees of companies that hire them instead of independent contractors.

The International Brotherhood of Teamsters called it a ‘massive victory’ for exploited truckers, alleging AB5 aims to clamp down on labor abuses and push companies to hire drivers as employees – which would enable them to join unions and collectively bargain with employers.

But the California Trucking Association, which sued over the law, argued the it could make it harder for independent drivers who own their own trucks and operate on their own hours to make a living by forcing them to be classified as employees.

The legal battle stalled enforcement of the law for more than two years, but the U.S. Supreme Court declined to review the case on June 30, clearing the way for it to go forward. 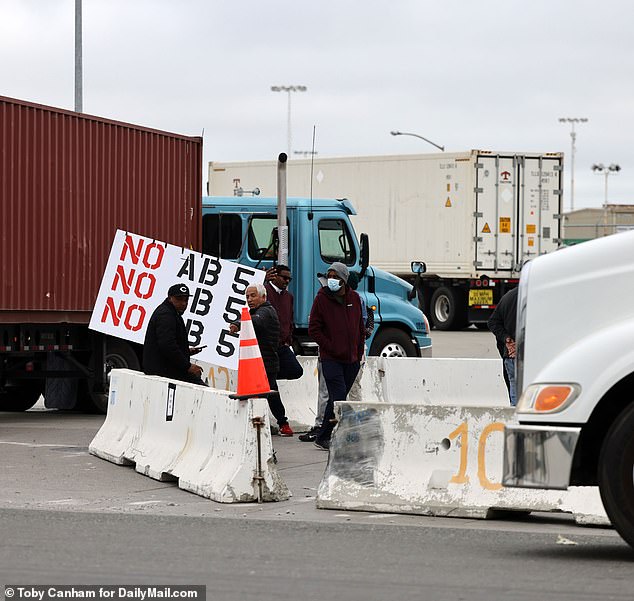 Truckers against AB5 argue the law has ruined their autonomy and upended the way they do business. The demonstrators are pictured in the designated free speech zone on Monday 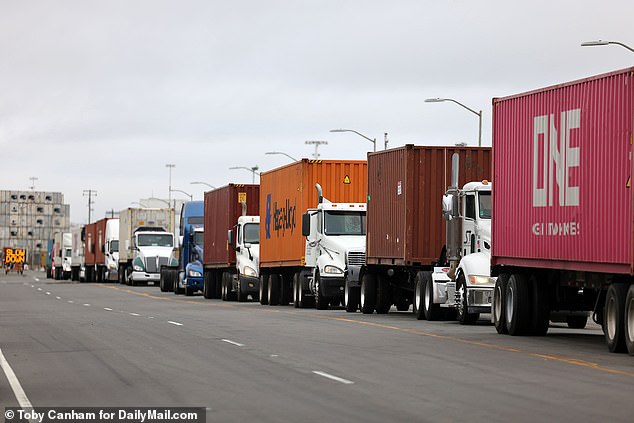 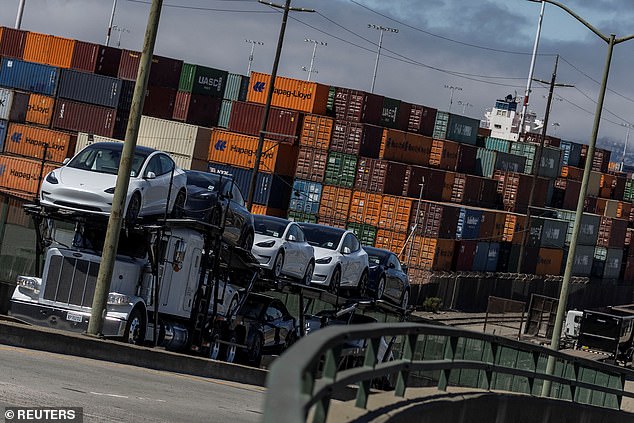 Photos showed rows of stacked shipping containers with nowhere to go on Thursday, and an armada of fully loaded freighters queued up in the port with nowhere to unload their cargo

The Port of Oakland is a key hub for California’s $20 billion-plus agriculture exports, which include almonds, dairy products and wine.

Operations at the Northern California port grounded to a near standstill last week after protesters used pickets and tractor-trailers to block terminal gates.

The eighth-busiest US container seaport – which also handles imports like coffee, electronics and manhole covers – was already working to clear a pandemic-fueled cargo backup before the trucker protests began.

The protests in Oakland followed actions earlier this month at the nation’s top two seaports, at Los Angeles and Long Beach in Southern California. The three California ports handle about half of the nation’s container cargo volume. 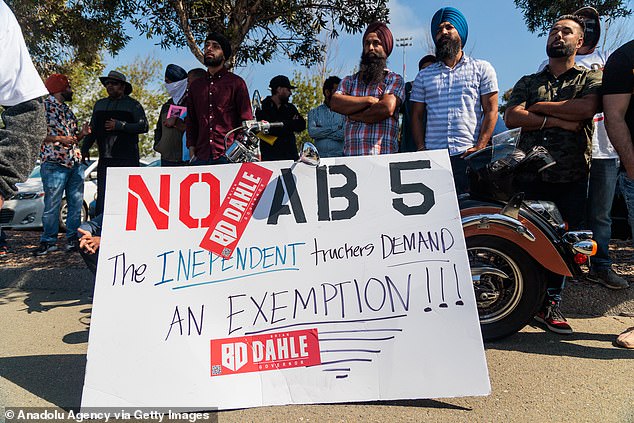 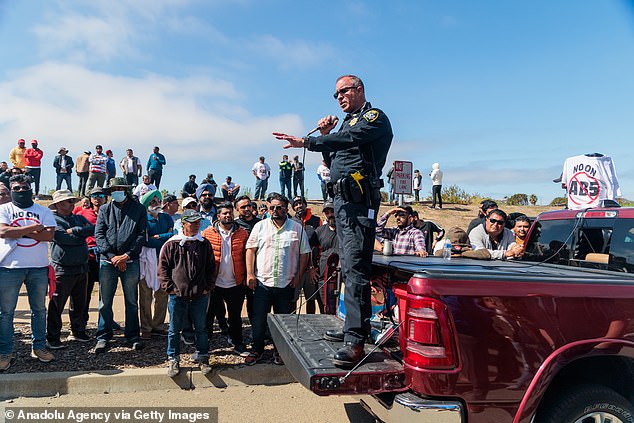