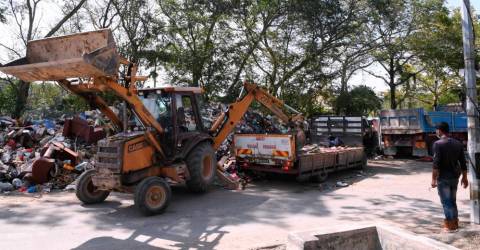 KUALA LUMPUR: Clean-up works of post-flood waste at six states have reached an overall 98.17 per cent of completion under the first phase and 100 percent for the second phase which involved only two states (Negeri Sembilan and Melaka) as of yesterday.

The National Disaster Management Agency (NADMA), in a statement today, said 438 tonnes of waste were collected for both phases that utilised 112 types of machinery and 354 workers.

“The first phase of post-flood clean-up works in Johor have reached 90 per cent, with areas of focus for cleaning at Segamat District and Muar District, while in Pahang, clean-up works remain at 99 per cent as there are flushing of new waste from housing areas, monitoring today found,” the statement added.

Meanwhile, the statement said the Department of Minerals and Geoscience Malaysia (JMG) had recorded four landslides, two each in Negeri Sembilan and Sarawak, taking the total number of landslides during the northeast monsoon (MTL) 2021/2022 nationwide to 280.

The statement also informed that 61.7 per cent of household heads (KIR) affected by the first wave of the MTL floods and 52.3 per cent affected by the second wave have received the Bantuan Wang Ihsan (BWI) compassionate aid payments so far, involving an allocation of RM64,833,000. — Bernama