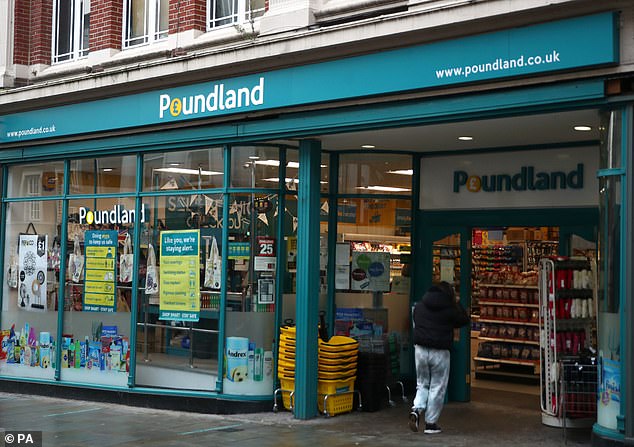 Poundland will open seven new branches in two weeks – so will one be near YOU?

By Danya Bazaraa For Mailonline

Budget chain Poundland is opening seven new stores in two weeks in what they are calling a ‘Super Saturday’.

The seven new stores will be in locations left empty by other retailers and are set to create around 160 new roles. There will also be an extension on an eighth branch.

Shops will range from small stores for local neighbourhoods to supersize branches with huge ranges including dedicated PEP&CO clothing and homeware departments.

The popular brand is pushing to open the new shops on Saturday December 10 to give customers ample time for Christmas shopping.

Where will the new Poundland stores be?

The new locations include Rainham in Kent, Swindon in Wiltshire, Aylesbury in Buckinghamshire, Tipton in the West Midlands and Craigavon, Northern Ireland.

Poundland’s new stores will have a wide selection of everyday essentials such as groceries, drinks and snacks as well as revamped health and beauty, entertainment, stationery and craft ranges.

There will also be wider ranges of chilled and frozen food and PEP&CO clothing and homewares.

Poundland chief operating officer Austin Cooke said: ‘This investment in towns and cities up and down the country shows our commitment to bringing shoppers more choice and amazing value just when they need it the most.

‘Whether it’s daily essentials at a neighbourhood store or choosing from our PEP&CO seasonal clothing range to make Christmas extra special this year, we’re there to help our customers find ways to cope with the pressures on their budgets.’

The locations of the new stores and number of jobs they will create include:

Ben Wall, Poundland director of property portfolio, added: ‘It’s been a tremendous task to get these stores ready to open in time for Christmas and it’s a reflection of the dedication and hard work of all the teams involved at Poundland.

‘We also owe a big thank you to the contractors who’ve worked tirelessly to help us get the stores ready and to the property agents who’ve been busy behind the scenes to keep the timetable on track.’

This comes after earlier in the year Britain’s shoppers expressed fears that the days of the pound shop as they know it could be over – after noticing a series of items in Poundland on sale for £1.25 from Red Bull cans to Skips multipacks, and Colgate mouthwash to Iced Gems.

The retailer, which was founded in 1990 and has more than 800 UK stores, first ditched its ‘everything’s £1’ slogan in November 2019 – instead pricing all of its products at a range of different points between 50p and £5.

But shoppers took to Twitter to complain about products selling at the stores for £1.25 – and one financial expert told MailOnline that this price point ‘is about as far as things can be pushed in my opinion, any further and volumes are likely to recede at levels that the business can’t support’.

Tweets included: ‘You guys at Poundland need to change your name to £1.25 Land’.

Poundland denied that selling items at £1.25 is linked to inflationary pressures – insisting that widening what it sells to offer value on a bigger range of products has been the retailer’s strategy for some years now.

It told MailOnline at the time: ‘It’s clear customers are shopping more intentionally and that’s why we’ve been leaning into our £1 price point – around 60 per cent of the grocery items we offer are £1 or less.

‘We don’t have a magic trick up our sleeves to counter inflation, but we’re working flat out to keep our promise of amazing value on everything we offer.’