She’s been married for 53 years so can safely be accepted as an expert judge of domestic harmony. But Mary Berry chose an odd way to describe the marital bliss that exists between the Duke and Duchess of Cambridge.

‘They really are a pigeon couple,’ says the much-loved TV cook in an exclusive interview with today’s Mail on Sunday You magazine.

What Mary was referring to, it seems, is that pigeons are incurable romantics, known for their billing and cooing rituals – and mating for life.

Mary adds: ‘When they are together, he’s constantly touching her arm and looking over at her smiling and she’s the same with him. So natural.’

Mary, 84, was joined by Kate and William to film A Berry Royal Christmas, a one-hour BBC festive special, and says she saw them at their most relaxed. ‘It was easy to see that William is very proud of Catherine,’ she says.

For the show, the Cambridges, right, don aprons to help Mary prepare a thank-you dinner for 150 charity staff and volunteers who give up Christmas Day to work for their charities.

A Berry Royal Christmas is on BBC1 tomorrow at 8.30pm.

‘I did have to tell Prince William off for cheating during a roulade competition,’ laughs Mary Berry as she recounts the ‘magical’ moments of cooking with the Duke and Duchess of Cambridge during a special BBC programme to provide a festive feast for charity workers.

A Berry Royal Christmas gives a revealing insight into the charities supported by William and Kate, as well as the volunteers and regulars who pass through their doors, many of whom have become close to the royal couple. 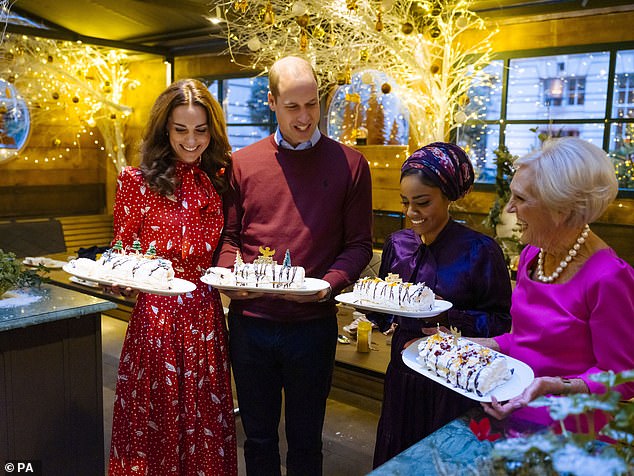 The TV chef, 84, was joined by Kate and William to film A Berry Royal Christmas, a one-hour BBC festive special

The programme was ‘entirely Prince William’s idea’, says Mary, who has previously met the prince through her work as a patron of Child Bereavement UK.

‘I saw him at an event a few months ago and he told me that Catherine follows my recipes and had just made one of my fish dishes. He said he would love her to do something with me for a special event and that he had an idea. I said, ‘Count me in!’

A few days later she received a call saying Prince William wanted to do a thank-you dinner for the charity staff and volunteers who give up their Christmas Day to work for three of their charities.

‘I thought of all those who sacrifice that day to help others in need and how fitting it would be to do something to celebrate them – and I said it was a marvellous idea!’

A Berry Royal Christmas features the couple – along with the queen of British cookery herself – on four royal engagements to meet the people whose lives have been changed by the support of these charities.

The show culminates in the Christmas feast hosted by the couple, with a menu overseen by Mary (who will be cooking some of her recipes for viewers to try at home), with a little help from special guest Nadiya Hussain. 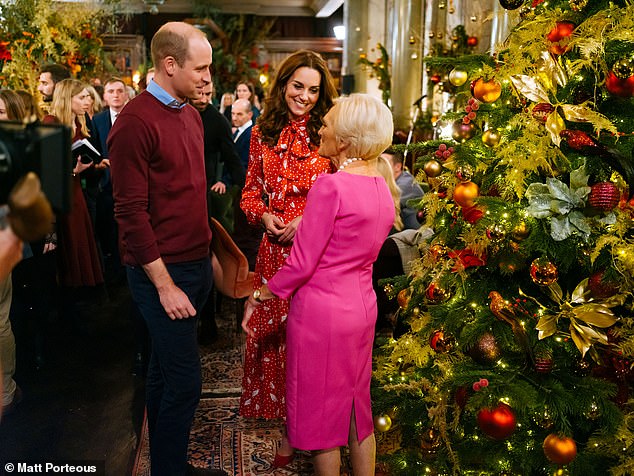 A Berry Royal Christmas gives a revealing insight into the charities supported by William and Kate, as well as the volunteers and regulars who pass through their doors, many of whom have become close to the royal couple

For Mary, the most eye-opening aspect of making it was seeing the royal couple at their most relaxed, with both of them at times even sporting aprons. She says, ‘I was so impressed.

They really are a pigeon couple [in that they mate for life]. It was easy to see that William is very proud of Catherine. He was keen to stress to me how none of his mental health charities would be what they were without Catherine, who puts so much time, effort and care into making sure everything works well.

‘It was just lovely observing them for those three days. When they are together, he’s constantly touching her arm and looking over at her smiling and she’s the same with him. It was very sweet to see because it was so natural.’

For Mary, the event was a great excuse to bond over food – talking about it, making it and judging the individual skills of the Prince and Duchess. ‘We had a lot of fun,’ says Mary. ‘When we made chocolate cupcakes for the children, I gave Catherine some icing sugar and she whipped it up and made lovely swirls on top of the cakes. You could see she is a confident cook.’

It gave Mary insight into the kitchen habits of the Cambridges – and Catherine got Mary’s seal of approval.

‘She’s a proper cook, for her children and for William. She’s a very hands-on mum. She told me she uses my pizza recipe and her children help her make them. Her own mum used to have my books, and Catherine grew up cooking with her. I know she has a lot of my books too.’

Catherine also gave Mary a behind-the-scenes tour of a new playground at RHS Wisley inspired by the ‘Back to Nature’ garden she co-designed for the Chelsea Flower Show, with its aim to get children and families to experience the great outdoors.

‘Catherine is very focused on going back to basics to give children a good start in life,’ explains Mary. ‘She believes many of the problems with mental health are caused by people not having it easy in their early years.

‘It’s why she loves the idea of children being able to run freely and play outside in the fresh air, and to be together as a family – something her children love to do.’

Just as Catherine believes that fresh air is beneficial to wellbeing, ‘Cooking is good for mental health,’ declares Mary. ‘You have to focus, clear your mind and deal with the task in hand. It is all about sharing – it’s lovely to receive a little praise for something you have made and to be able to share it.’

Some of the recipes for the dinner were influenced by Mary’s chats with Catherine about her children. ‘We made a chocolate and beetroot cake inspired by her telling me that Prince Louis absolutely loves beetroot, which isn’t the most obvious thing for a young child to like.’

There were no demands put on Mary by William and Catherine. ‘I was absolutely free to create any recipe I wanted. I was a little nervous at first but as soon as I saw their huge smiles that melted away.’

The atmosphere was so convivial that, on the final day, when it came to making the buffet dinner for the 150 charity workers and volunteers, the couple were happy to take part in a meringue roulade decorating competition with William aided by Nadiya and Catherine helped by Mary, who was also the judge.

At one point, I had to tell William off jokingly because he kept looking to see what Catherine was doing, so I told him he was cheating. Catherine finished first – she did a lovely woodland-themed decoration. His was rather more gaudy but he was good with his piping and decorating – I was most impressed. In the end I declared a draw.’

William was, she says, also a natural joker. ‘In Liverpool at The Brink [a dry bar and restaurant that provides a safe space for people suffering from addiction, run by Action On Addiction], a chap came in with brightly dyed hair and William told him next time he saw him he’d do his the same way. Then he plucked at his head and said: ‘Except there’s not much here to dye.’ 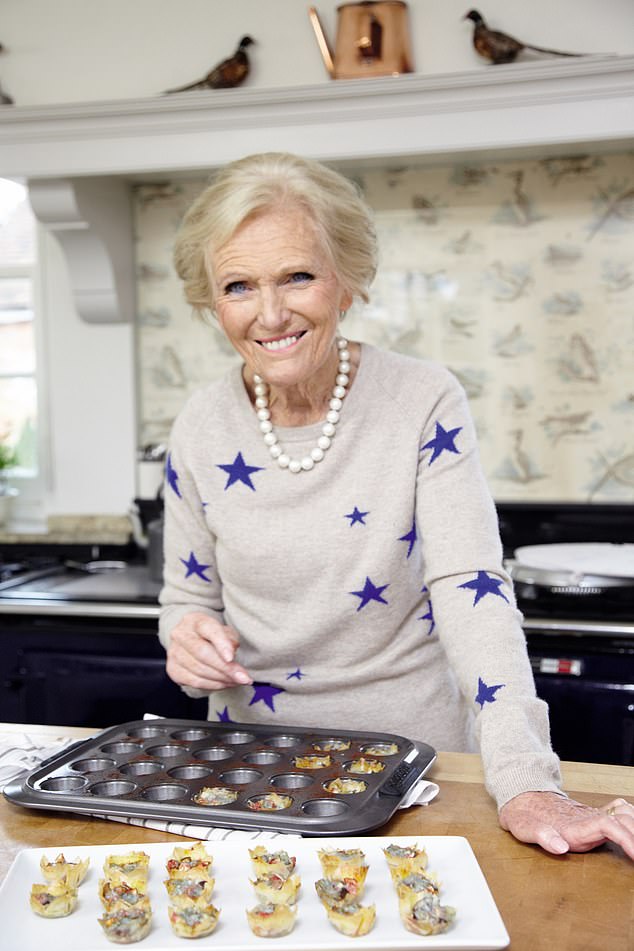 ‘Cooking is good for mental health,’ declares Mary. ‘You have to focus, clear your mind and deal with the task in hand. It is all about sharing – it’s lovely to receive a little praise for something you have made and to be able to share it’

While in Liverpool they also visited The Passage, the UK’s largest centre for the homeless. ‘It was a hectic few days but I loved watching the way they interacted with everyone because both are so natural at putting people at their ease. I think it was a day people will remember for years to come. I certainly will.’

Asked if she thinks the couple will be rustling up some of her delicacies for their own Christmas dinner, she said: ‘They both said they were looking forward to spending the day with the family and I don’t know what they’ll be cooking, but the Stilton and Fig Tartlets were very popular.’

By royal appointment, of course.

A Berry Royal Christmas will air on Monday 16 December at 8.30pm on BBC One

Save 20 per cent on Mary’s cookery books