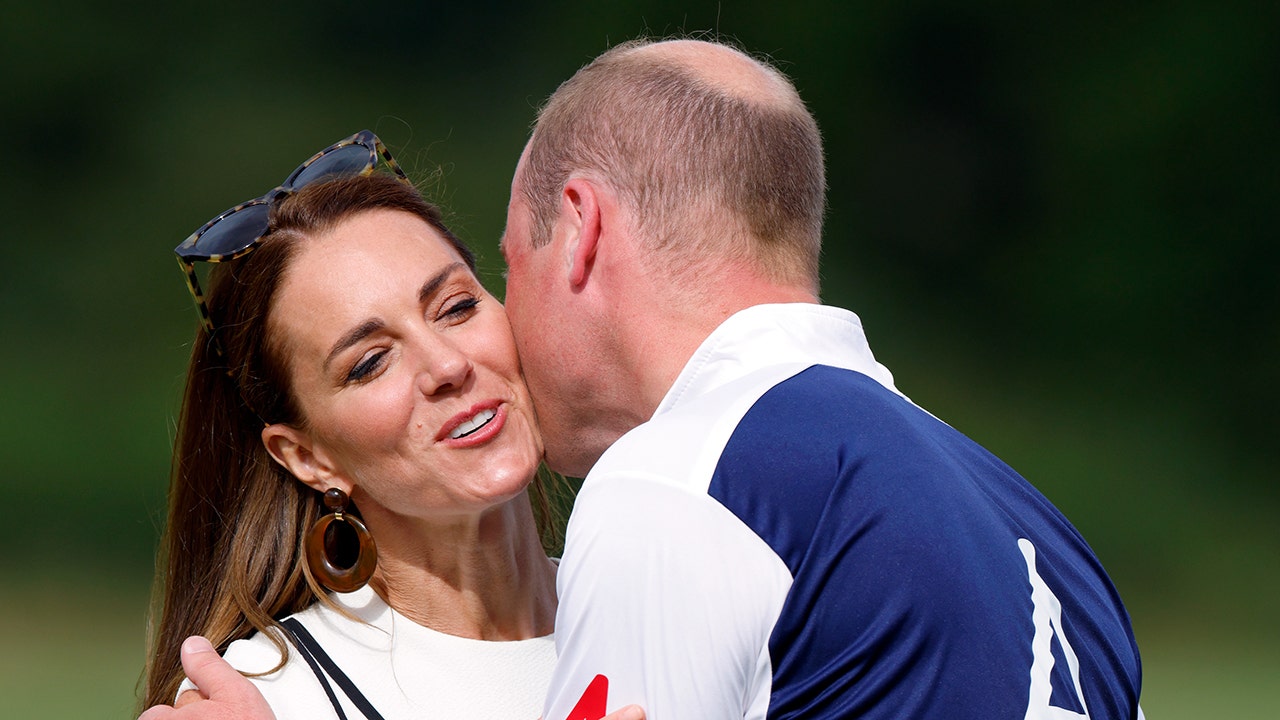 The Duke of Cambridge gave his wife a kiss on the cheek at the end of the Wednesday match and he was also seen with his arm around the duchess’ back and with their cocker spaniel puppy Orla in tow!

The duke’s team even earned a trophy at Out-Sourcing Inc. Royal Charity Polo Cup at Guards Polo Club, which raised money for several charities important to the couple.

PRINCE WILLIAM REMEMBERS PRINCESS DIANA ON LATE ROYAL’S BIRTHDAY: ‘SHE WOULD BE SO PROUD’

Royal expert Myka Meier previously told People magazine there are no specific etiquette rules for the duke and duchess regarding PDA.

Still, the couple tend to err on the side of propriety while out in public or conducting their royal duties.

She said senior royals would use their use judgment as far as public affection.

“The royals often adjust PDA to mirror the formality of the event they are attending. At a somber or more formal event, we are less likely to see PDA than at a casual event where it would be deemed more fitting,” she said.

The couple were also spotted taking in the quarter-finals at Wimbledon together on Tuesday and on Saturday Kate was seen watching the women’s finals just a few rows in front of “Top Gun: Maverick” star Tom Cruise in the Royal Box.

Britain’s Prince William Duke of Cambridge, and his wife Kate Middleton , Duchess of Cambridge, applaud in the royal box during the men’s singles quarter-final match between Novak Djokovic of Serbia and Jannik Sinner of Italy at Wimbledon Tennis Championship in London, Britain, on July 5, 2022.
(Photo by Li Ying/Xinhua via Getty Images)

In one photo Cruise appeared to notice the duchess in her stunning yellow Roksanda dress while she remained focused on the match.

Kate, Duchess of Cambridge (front) and US actor Tom Cruise (rear) attend the women’s singles final tennis match between Kazakhstan’s Elena Rybakina and Tunisia’s Ons Jabeur on the thirteenth day of the 2022 Wimbledon Championships at The All England Tennis Club in Wimbledon, southwest London, on July 9, 2022.
(Photo by SEBASTIEN BOZON/AFP via Getty Images)

Kate is a patron of the All England Lawn Tennis Club as well as an enthusiastic amateur player herself and presented the trophy to winner Elena Rybakina.

Rybakina is the first player from Kazakhstan to win a grand slam singles title at the tournament.

Kate and William were last spotted with the movie star, who just celebrated his 60th birthday on Sunday, the “Top Gun: Maverick” premiere in London on May 19.

Fans called Cruise a “gentleman” at the premiere when he was seen giving the stiletto-clad royal his hand to help her up some stairs on the red carpet.

“Tom is so lovely. Always the gentleman,” one Twitter user wrote at the time.

At the premiere, Cruise told reporters he and William “have a lot in common. We both love England and we’re both aviators, we both love flying.”

The duke was famously a search and rescue pilot for the Royal Air Force during his military career.

William is expected to join Kate for the men’s finals on Sunday.