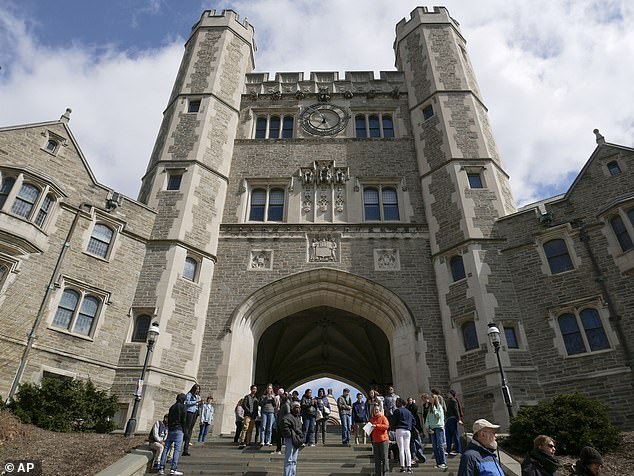 Princeton is selecting fewer white students every year and now takes more black, Hispanic and Asians applicants than any other Ivy League school

By Jennifer Smith For Dailymail.com

Princeton is selecting fewer white students every year and now takes more non-white applicants than any other Ivy League, new data from the university has revealed.

Princeton announced on Thursday that it had sent letters out to its class of 2025. The successful applicants will learn by 7pm EST if they’ve gotten a place or not.

The school did not separate among that group how many are black, Hispanic, Asian or any other race, leaving 32 percent –  479 students – to ‘self-identity’ as white.

Dartmouth is the only Ivy League this year that is accepting a majority of white students over non-white students; the school’s 2025 class is split 48% non-white and 52% white.

Only Harvard released a breakdown by race – the rest of the schools described the intake as students of color.

68 percent of Princeton’s class of 2025 is non-white and 32 percent are white. It is the Ivy League now accepting the highest number of non-white students

*Has not released a breakdown

Across all races, 52 percent of the new students are women, and 48 percent are men.

When applying that to the racial groups, around 500 are men of color and 500 are women of color, 229 are white men and 250 are white women.  Sixty-four percent (958) are from public schools.

Only ten percent – some 140 kids – are the children of Princeton alumni.

The school insists that it is following the same process every year, without adjusting it deliberately in favor of any one group of applicants.

They have not revealed the breakdown applicants to be able to determine if more students of color are applying every year.

It means 40 percent of the class is white – the largest percentage by far.

Harvard said its intake is on par with the demographics of the US population.

According to the most recent government census, around 60 percent of the country is white, 18.5 percent is Hispanic, 13.4 percent is black and 5.9 percent is Asian.